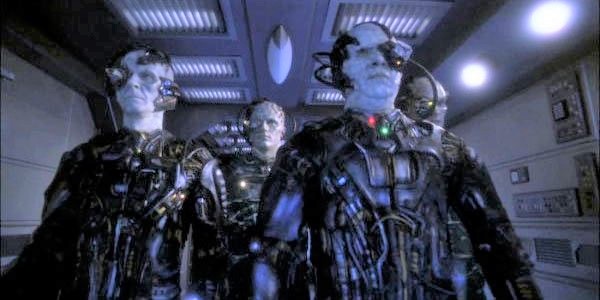 You WILL be assimilated, resistance is futile

In censuring Sen. Amanda Chase, R-Chesterfield, the Senate of Virginia has established new rules for acceptable political behavior and rhetoric. The rules are always changing, so it’s important to keep up or risk being consigned to the netherworld of the political undead.

You can read the censure here. Do not misinterpret what follows as a defense of Chase. She’s destroying Virginia’s Republican Party with her antics and hyperbolic language, and she has brought much of this obloquy upon herself. Rather, take the recitation of the charges listed in the censure as signs of a phenomenon even more disturbing than Chase: evidence of how the political Left in Virginia increasingly dictates the rules of acceptable political discourse and to whom the rules apply.

Charge #1: Chase berated a Capitol Police officer on duty when the Senator was not given access to a restricted parking area in front of the Capitol. She addressed the officer profanely and made offensive remarks to the Clerk of the Senate. She suggested the officer had been racially motivated in reaction to the Senator’s “white privilege.”

New rules: Profanity and rudeness are grounds for censure. So is imputing racial prejudice to a person of another race…. depending upon the race in question.

Charge #2: Chase “used her social media page to recklessly identify the names and contact information of colleagues whose legislation she disagreed with.” Furthermore, she expressed “outrage” and urged her followers to “voice their dissent directly.” Some aides and legislators received threats.

New rules: No more publishing legislators’ publicly available contact information on Facebook. No more urging followers to let lawmakers know how they feel. And if some of your nutcase followers issue threats, you are personally responsible.

Charge #3: On social media, Chase “blamed victims of sexual assault for not fending off their attackers, making the damaging and indefensible claim that ‘It’s those who are naive and unprepared that end [up] raped.’”

New rule: No more saying provocative and outrageous things that offend the sensibilities of Democratic lawmakers.

Charge #4: Chase decried “identity politics” and suggested that, because her fellow Senator is vice-chair of the Virginia Legislative Black Caucus, she is “not for all Virginians.”

New rule: No more saying provocative and outrageous things that offend the sensibilities of Democratic lawmakers.

Charge 6: “Following the 2020 presidential election, Senator Chase implicated both major political parties in baseless claims of a ‘stolen’ election, asserting, ‘Make no mistake. We are at war. The Democratic Party hijacked our 2020 Presidential Election and [has] committed treason. Where the hell are the Republicans?’

New rule: It’s OK to accuse President Trump of treason for stealing the 2016 election by colluding with Russia, but it’s outside the bounds of acceptable political discourse to accuse Democrats of stealing the 2020 election.

Charge 7: Chase asserted that “The Virginia Democratic Party is racist to its core” after Democratic officials asked a white local registrar to step down.

New rule: Only Democrats are allowed to accuse their political opponents of being racist.

Charge #8: After the Jan. 6 storming of the U.S. Capitol, Chase voiced support for the rioters, calling them “patriots who love their country” and propagated unfounded claims regarding the nature of events. Further, when called upon to do so, she declined to repudiate white supremacists in the mob.

To repeat: I do not defend Chase’s statements, many of which I have criticized on this blog. Her style is inflammatory, her rhetoric is often outrageous and not backed up by the facts. But many elected officials say a lot of things that I find inflammatory, outrageous and lacking in factual basis, and I don’t see anyone censuring them.