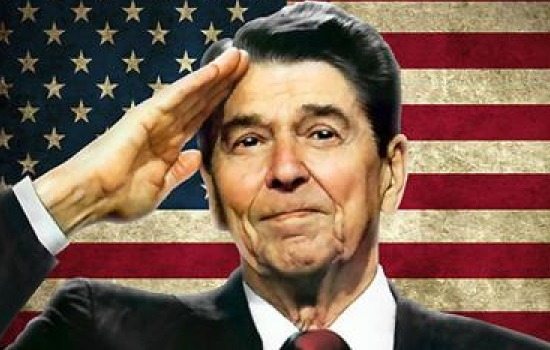 “You and I have a rendezvous with destiny. We’ll preserve for our children this, the last best hope of man on earth, or we’ll sentence them to take the last step into a thousand years of darkness. If we fail, at least let our children and our children’s children say of us we justified our brief moment here. We did all that could be done.” – Ronaldus Magnus (Latin: Ronald The Great)

I cannot think of a time in my lifetime (more than half a century) when those words have meant as much as they do now. The difference from now and when Ronald Reagan uttered them is that the enemy is not only socialism/communism, but now radical Islam and criminal illegal aliens. (intentional redundancy)

The darkness is all around us, not just at the borders, not just in international relations, not just in competing political philosophies. We have created a toxic environment that is a Doomsday Machine, so poisonous as to destroy all sides if not reversed

I’ve seen in my own tiny town elections this last spring where three candidates ran as a slate under a storm cloud of bullying, intimidation and ethics charges. Two of those were elected, along with another like minded candidate. Our town hall will be contentious and partisan for the first time in decades.

We have all seen it in the Virginia elections where progressive liberal (intentional double negative) Governor Ralph Northam said: “Virginians didn’t send us here to be Democrats or Republicans; they sent us here to solve problems.” He then dumped tons more poison into the political pool by mollifying his very narrow political base at the expense of his oath and the clear majority of citizens of the Commonwealth who are tired of it.

In Reagan’s day, socialism/communism was the enemy du jour, with Islamic extremism just starting to get its feet wet as a political spoiler in the world. Today the remaining socialist/communist states, China, North Korea and Cuba are not always front and center.

9-11, middle east wars and global acts of terrorism fill the front pages and for some reason, Americans cannot unite as a people to oppose it. Eight years of America standing down under the Obama administration has emboldened enemies foreign AND DOMESTIC. Domestic threats like Black Lives Matter and Antifa are declared threats to our first line of domestic security, our police.

Reagans “Rendezvous With Destiny” speech that I reference was on point when it was delivered in 1964, but if it were given today, much of it would be surgically accurate:

One quote that affects all Americans but is especially applicable to Virginia as we go into the mid-term elections is: “This is the issue of this election: Whether we believe in our capacity for self-government or whether we abandon the American revolution and confess that a little intellectual elite in a far-distant capital can plan our lives for us better than we can plan them ourselves.”

Virginian Republicans have the opportunity to nominate candidates that stand for states’ rights, for keeping as much government as possible, as close to Virginias citizens as possible. These candidates will favor constitutional conservatism, where local police cooperate with their federal colleagues. Where morality is defined by local custom, not federal laws or judges. Where the second amendment is as important as the first.

Finally, I will share the quote that should chill you to the bone. This concept in 1964 seemed far-fetched: “Not too long ago, two friends of mine were talking to a Cuban refugee, a businessman who had escaped from Castro (Cuba), and in the midst of his story one of my friends turned to the other and said, “We don’t know how lucky we are!” And the Cuban stopped and said, “How lucky you are? I had someplace to escape to.” And in that sentence, he told us the entire story. If we lose freedom here, there’s no place to escape to. This is the last stand on earth.”

The Gipper stood tall and went nose to nose with socialism/communism and won, but in 2018 I fear we are only one election cycle away from having no-where to go, the enemies to our Great American Experiment are many and well-armed. Please, my conservative friends, please research the candidates and vote and make sure every like-minded friend/relative/acquaintance does as well. Then, “If we fail, at least let our children and our children’s children say of us we justified our brief moment here. We did all that could be done.”

Reagan was the president of a labor union. Enough said.

Our republican House of Delegates and our republican State Senate expanded medicaid…not even a year after many of them were elected. How in the world do we trust Virginia republicans? I fear many will stay home in June for the primary and in November for the general election. Many people I know ask “why bother?”

The underlying principle to restoring the virtue of the Signers vision of this Republic is through unconditional truth via consumptive education within our open society daily. This is the answer which will inspire and educate everyone and halt at once the internal take over of our principles and values in a receptive desirable process. Amen ~