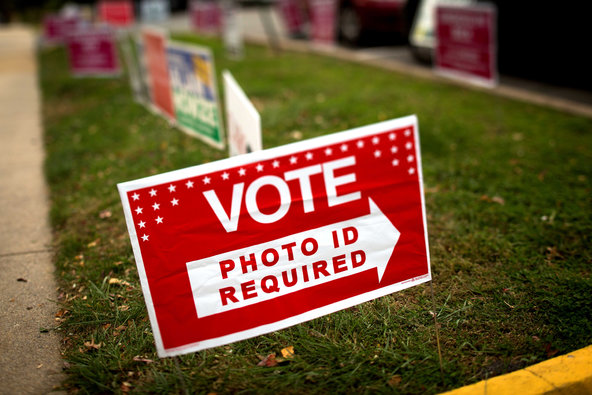 Earlier today the 4th Circuit Court of Appeals upheld Virginia’s Voter ID law with a vote of 3-0. The court ruled,

â€œNot only does the substance of SB 1256 not impose an undue burden on minority voting, there was no evidence to suggest racially discriminatory intent in the lawâ€™s enactment,â€

Democrats tried to argue that the law was a deterrent to young and minority voters. They argued that it was like the North Carolina voter ID law which has been overturned. Â However the court said the Virginia law was in ‘no way akin’ to the North Carolina law and in no way discriminated against African Americans.

In a statement today Speaker of the House of Delegates Bill Howell said,

â€œI am pleased that Virginiaâ€™s photo ID law was upheld today in a 3-0 appeals court ruling. Todayâ€™s ruling is a victory for a commonsense law that protects the integrity of Virginiaâ€™s elections. Earlier this year, we saw multiple cases of voter fraud throughout the Commonwealth. This law was carefully crafted to provide an extra layer of protection to ensure the sanctity of the ballot box.â€

Todayâ€™s ruling is a victory for a common-sense law that protects the integrity of Virginiaâ€™s elections,â€

More on the story here and here.Â

Republicans use the ID law and the reasoning of protecting the election process as an excuse . The only reason Republicans pushed this bill to be passed and signed what’s the fear of the large number of illegal immigrants being able to vote against them we know this. Too bad the same Republicans would not enforce existing laws in Virginia so that the illegal immigrants did not take the jobs from the people who vote for them. That’s why we need the damn wall!!!!!!

That this was even a debate is insane to me. I think the fact that requiring ID to vote proves became a political issue that has been fought over for so many decades, and it has literally been decades, shows how strong the Democratic party is at framing debates. I mean we’re talking about a person walking up to vote and simply showing an ID to prove who they are and that they are registered to vote. It’s unbelievable that this is a thing.

As a classical liberal, something akin to a Libertarian, I often find myself in agreement with the ACLU, but their argument against voter ID is crap, so much so that I think they’re harming their own credibility.

You’d think carrying an ID must weigh a ton, the way dems fight the requirements kicking-and-screaming. We all know the real reasons they oppose them.

Well, nice to know that common sense can prevail even in 4th Circuit. Only wish I had the financial resources and legal representation to appeal Judge Moon’s recent decision in Schweikert v. Herring et als and to get these same judges in Richmond to also consider restoring the disenfranchised minority rural voters rights to have their electors assigned on a “by district basis” rather than the state’s current ‘winner take all” method of assigning them especially before the scheduled vote next week. At least this will be an issue that the General Assembly must debate again next session based on HB 1425 and SB 837, although I seriously doubt that even if the two bills manage to pass and are reconciled into one bill, the Governor will have any desire to sign them. For why would he sign into law any bill that would force his party to give up their current monopoly in the Electoral College, much less allow the people living in six of the current 11 state Congressional districts to secede from the Commonwealth and form their own states and finally gain the political divorce from northern Virginia and home rule that many have so long desired in order to actually elect United States Senators and Governors of their own choice and shared values?.

LOL I didn’t even know there was a movement to break up our electoral college vote by district, that is awesome. That’s exactly what Virginia needs.

It does make you wonder what would happen if every state did that. Obviously it would be to Republicans advantage in places like California where they might actually win some electoral college votes, but what about red states where they might lose some ? Republican “red states” also contain a lot of cities that vote Democratic.

Why do liberals think that all minorities are either clueless or incompetent?

I have never understood that either. It’s pathetic.

A few days after the Roberts court gutted the 1965 Voting Rights Act, Alabama passed a law requiring a specific type of ID to vote. The ID is available only at DMV offices. Then, the state closed 30 DMV offices, all of them in majority black communities.

There’s nothing clueless or incompetent about this.

In 1965 your grandmother probably didn’t drive, a lot of minorities really didn’t have ID in 1965, a lot of people didn’t even have social security numbers in 1965 and worked for cash. BECAUSE 1965.

Its that element of paternalism that the Democrats can’t seem to shake.

Back when the Democrats were still physically enslaving blacks, there was a warped notion that the masters were actually doing the slaves a favor. Since the slaves were obviously inferior, they would never be able to provide for their own needs (housing, food, clothing, etc). So the masters would step in and provide those things in exchange for some free labor. They were really humanitarians you see.

Well the Democrat’s opinion of blacks really hasn’t improved very much over the years. So they still feel the need to step in and help them out.

Excellent, I’m glad. I can’t tell you how many whining Democrats protested this law when I was working as an Officer of Election this time around.

I don’t believe a word of your comment. I’m a member of my county’s Electoral Board; have been on the Board for 7 years. I have heard not a single complaint about the ID requirement. Zero.

Of course, we got busy and advertised the requirement and made certain everyone who did not have proper ID had access to either DMV or General Registar’s office where they could obtain the ID.

Yes, I’m sure you don’t. Try working the polls, I’ve never seen so many people griping about having to show an ID or rolling their eyes and commenting that the system was unfair.

Our Democrat observer commented that people should stop complaining at me for doing my job. Between the word of someone who was there watching, from your party I might add, and said that it was whining, and your comment that it didn’t happen? I’ll take the word from the guy who was there and actually knows what he was talking about.

Hey what if, in addition to providing proof that we are who we say we are when we vote in order to circumvent multiple voting in the same or different precincts (as has been previously identified in a number of places), we also consider requiring that we when you we vote, you also pay $1 to actually count your vote and cover the other costs incurred in conducting the election along with adding a $5 tax for not voting as well to help defray the costs of running local voter registration offices year round?

I guess you never heard of the “poll tax.” Poll taxes were outlawed by the 24th Amendment.

That’s why this isn’t a poll tax but a citizenship tax due on July 4th every year.

” Republicans believe that every day is the Independence Day, July 4th Democrats believe every day is April 15th thanks! Ronald Reagan. Let’s don’t ruin the second most wonderful day on the calendar next Christmas by taxing it like Democrats would or even worse subsidizing it.

And how do you know the people complaining were Democrats?

The “Nasty woman” badges, campaign stickers, and sample Democrat ballots were a hint.