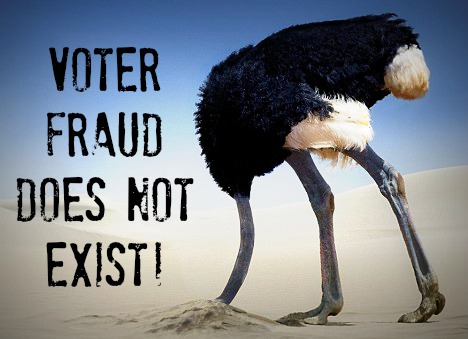 Vote fraud is real, but not likely to change this election’s outcome

Vote fraud is real, but it likely didn’t change the outcome of the 2020 election, which was likely won by Joe Biden. It’s rare for incumbent presidents to be defeated in a re-election bid. But Trump, who was unpopular throughout his term in office, ran a lackluster campaign, in which he committed gaffe after gaffe that antagonized swing voters. As a result, he apparently lost the election by a narrow margin in three states, each of which he has to carry to win the election. Trump has every right to bring legal challenges to election irregularities, but they are unlikely to change the result. His challenges are likely to just delay the inevitable: a Biden victory.

But many Republicans are understandably skeptical of media claims that Biden won, because the media makes so many false claims about vote fraud. For example, journalists at the New York Times are falsely claiming that vote fraud never happens. The Times’ Jamelle Bouie claims that “Voter fraud is a myth.” But as the American Enterprise Institute researcher Lyman Stone, who dislikes Trump, notes, “This is clearly not true. Every year there are dozens of voter fraud cases with clear evidence and convictions!”

As Stone recounts, “I personally know of someone who voted (a while back, not this election) in one state under her maiden name and another under her married name…. She was never caught.” As Stone notes, “You can use Google and routinely find significant convictions for vote-fraud rings!” For example, “people bribe county clerks” in Kentucky.

While vote fraud has likely not changed the outcome of any recent presidential election, illegal votes likely has affected the passage of key legislation like the Affordable Care Act, by making Congress more progressive than it otherwise would be. As a libertarian commenter notes, “Sen. Al Franken was the 60th vote on Obamacare and this would not have happened if he hadn’t” been elected with illegal votes. Those “votes impacted the entire country significantly.” As Bill Frezza recounted in Forbes, “illegal votes may have given Sen. Al Franken (D-Minn.) his 312-vote margin of victory in his 2008 Senate race—out of the nearly 3 million votes cast.” The Washington Examiner noted that 1,099 felons illegally voted in that Minnesota senate race, far more than Franken’s margin of victory, and 177 were later convicted of voting illegally.

This year’s presidential election, however, is a different matter, because Biden’s apparent victory margin is far bigger than Franken’s, and exists in multiple states, not just one. Conservative lawyer Erick Erickson, who has litigated vote fraud issues, says the outcome of this election is unlikely to be thrown out based on fraud. My considered opinion as a lawyer who has litigated voting rights cases, is that fraud likely did not change the outcome of the 2020 election.

Similarly, Stone says there is no proof that the outcome of this presidential election was changed by fraud, because Biden leads by thousands and thousands of votes in each of the three disputed states that Trump needs to carry to win the election. Fraud would have to change the outcome in each of those states for Trump to win.

But that doesn’t mean fraud doesn’t happen, or that there weren’t irregularities in the 2020 election. Yet media organs like the New York Times do not even want to report on allegations of vote fraud and irregularities by government officials, claiming that merely reporting on the fact of such allegations is right-wing “disinformation.”

As the New York Post’s Jon Levine notes, “New York Times tech reporter” Kevin Roose called “four accurate stories ‘right wing misinformation.'” Each of the stories labeled as “right-wing misinformation” accurately reported on actual or alleged election irregularities. The first story was “Republican in Michigan goes from loser to winner after ‘technical glitch’ fixed.” This reversal of fortune actually happened, and was reported not just in the conservative Daily Wire, but also the liberal Detroit Free Press, which reported the same glitch in ballot-counting for an Oakland County Commission seat, and likewise reported that Republicans actually won that election once the glitch was fixed. Yet the New York Times reporter wanted the conservative Daily Wire to be blocked by Facebook as “disinformation” just for reporting on this.

The second story, by conservative Breitbart, was “AG William Barr Authorizes DOJ to Look into Voting irregularities.” The Attorney General did just that, as the Associated Press has also reported. The fourth story, by conservative Breitbart accurately reported that two senators called on a state secretary of state to resign over the election. And they did just that, as liberal newspapers reported as well. Yet these stories, too, were falsely depicted as “disinformation” when they appeared in conservative publications.

Vote fraud is real, but not likely to change this election’s outcome was last modified: November 10th, 2020 by Guest Contributor Hans Bader