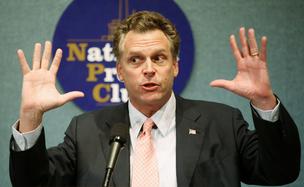 Vote ‘No’ on the Appropriations Bill.

In what was supposed to be just a session to debate Medicaid expansion and judges, the General Assembly is preparing to reconvene tomorrow where they will be asked to consider a new appropriations bill, just over two months into the fiscal year. They should reject this bill.[read_more]

Dave Ress at the Daily Press had an interesting article Saturday about this special session. His piece explores how curious the procedural aspects of this particular session appeared to be:

It’s an extremely unusual approach, to hold a legislative session to consider legislation without committee, said Quentin Kidd, a political scientist at Christopher Newport University. Committees are at the heart of the process of making law, providing an opportunity for the public to comment and for legislators to hear from experts and from entities directly affected by any proposal.

What’s more interesting about this now, in hindsight, is that Ress—who is obviously a very well-informed person who follows politics for a living—made absolutely no mention of an appropriations bill being considered, less than a week before the legislature is supposed to vote on it. That’s because the appropriations bill wasn’t made public until two days ago.

Let that sink in. The General Assembly is being asked to sign off on hundreds of millions of dollars in immediate cuts to funding for higher education, local government, and a variety of state agencies, together with blanket rainy day fund appropriations totaling $470 million in just this year alone. This will come after legislators and the public will have seen it for what, three days? Four?

As House Appropriations Chairman Chris Jones said, this kind of approach is simply unprecedented. Previous Governors, including Gov. McDonnell, addressed much, much larger shortfalls through existing budget procedures without any risk of harm to our state’s credit rating.

As members of the House Appropriations Committee pointed out yesterday, so far this fiscal year the data indicate revenues are rising, not coming up short, suggesting this shortfall may not end up being a shortfall at all.

In fact, through August, collections of net individual income tax rose 8.6 percent from the same period last year. As the administration’s own finance secretary admits,

On a fiscal year-to-date basis, total revenue collections rose 7.7 percent in August compared with the same period last year, well ahead of the revised annual forecast of 2.7 percent growth.
…
September collections will complete the first quarter of fiscal year 2015 and provide a clearer assessment of revenue growth. The first estimated payments from individuals, corporations, and insurance companies are due in September.

In other words, we may very quickly climb out of the hole that the Governor’s projections have placed us in. Put very simply, there is no emergency! Why not wait and handle this like the Virginia Constitution and statute prescribe, like has always been done? Why rush to do this when the public (and most of the legislature) hasn’t had the time to understand the import of this appropriations bill?

The lack of any meaningful ability to debate this appropriations bill that was sprung on the legislature and the public at the last minute, and the lack of any compelling rationale for passing it right now, should be reason enough to reject it and handle any shortfall that may remain in the normal legislative session. But there may be an even more compelling reason: Terry McAuliffe and his promises.

THERE ARE NO COINCIDENCES IN POLITICS
As members of the General Assembly are aware, the conservative grassroots in Virginia pushed the #BLACKorBUST movement in June to remove the language in the budget that was an essential part of the Governor’s ability to expand Medicaid on his own (and which, despite well paid opinions to the contrary, was plainly not conditioned on any action or inaction by the MIRC or any other body).  As reported by the Washington Post:

In June, a conservative blogger [that’s me] took note of the language and warned that it gave McAuliffe the money he would need to expand Medicaid on his own. That set off an uproar among some Republicans who pushed at the last minute to remove it through a budget amendment.

The amendment referred to here was, of course, the Stanley Amendment (named after GOP Sen. Bill Stanley). It reads as follows:

That notwithstanding any other provision of this act, or any other law, no general or nongeneral funds shall be appropriated or expended for such costs as may be incurred to implement coverage for newly eligible individuals pursuant to 42 U.S.C. § 1396d(y)(1)[2010] of the Patient Protection and Affordable Care Act, unless included in an appropriation bill adopted by the General Assembly on or after July 1, 2014.

If you read that quickly you might think it means that the legislature has to specifically appropriate money to fund Medicaid expansion before it can happen. But if you’re part of a repeatedly lawless administration that has already stated very clearly that it would exploit any potential avenue to “close the coverage gap,” you’d probably prefer to read it another way.

Parsed very carefully, the current budget says that the Governor cannot spend money on Medicaid expansion unless the funds he spends are included in an appropriation bill adopted after July 1. Note that it does not say that the Governor cannot spend money unless it is specifically authorized. Rather, it says that as long as the money spent is included in a new appropriations bill, there is no affirmative bar to its being spent on Medicaid expansion.

So if you’re a Governor who is hell bent on expanding Medicaid, and who has declared he will exploit every available opportunity to do so, regardless of how much you have to push the envelope on the limits of executive power, how do you get around the Stanley Amendment?

First you need an appropriations bill to be passed after July 1. But how do you get an appropriations bill without waiting until the end of the normal legislative cycle? You hope to have a significant shortfall (or perhaps you might have your people generate more pessimistic revenue forecasts to show a shortfall), and then yell loudly about how we have to address it quickly (before anyone has a chance to object).

The Governor did just that a few weeks ago:

Attentive readers will note that these leaders of the money committees are the same team that was responsible for insertion of the budget language stricken as a result of the #BLACKorBUST movement in exchange for Democrat votes on the McDonnell tax and transportation deal.

VOTE NO ON THE APPROPRIATIONS BILL
As structured, and if revenues recover as they appear to be doing, this appropriations bill will free up a boatload of cash for the Governor before the actual higher revenues disprove his hyperbolic forecasts, likely leaving a substantial sum of unspent money in the general fund by the end of the fiscal year. Existing law (not that the Governor necessarily feels constrained by that) gives the Governor significant latitude to reappropriate and allot for expenditure unspent sums in the general fund. What do you suppose he might want to do with that money next July 1?

I can’t say definitively that this appropriation is being pushed by the Governor for the purpose of skirting current restrictions on expanding Medicaid. But nor can anyone say definitively that, if this bill passes, the Governor would be constrained from achieving his goal on his own, as he plainly is now by the Stanley Amendment.  For this reason, Republicans should vigorously oppose this bill, and handle any revenue shortfall (real or imagined) in a manner the people of the Commonwealth deserve.

Really what this comes down to is how much we should trust Terry McAuliffe? The answer is not at all.

Call or email your legislator, and insist that they not allow the door that the people shut on Medicaid expansion in June to be reopened in September.