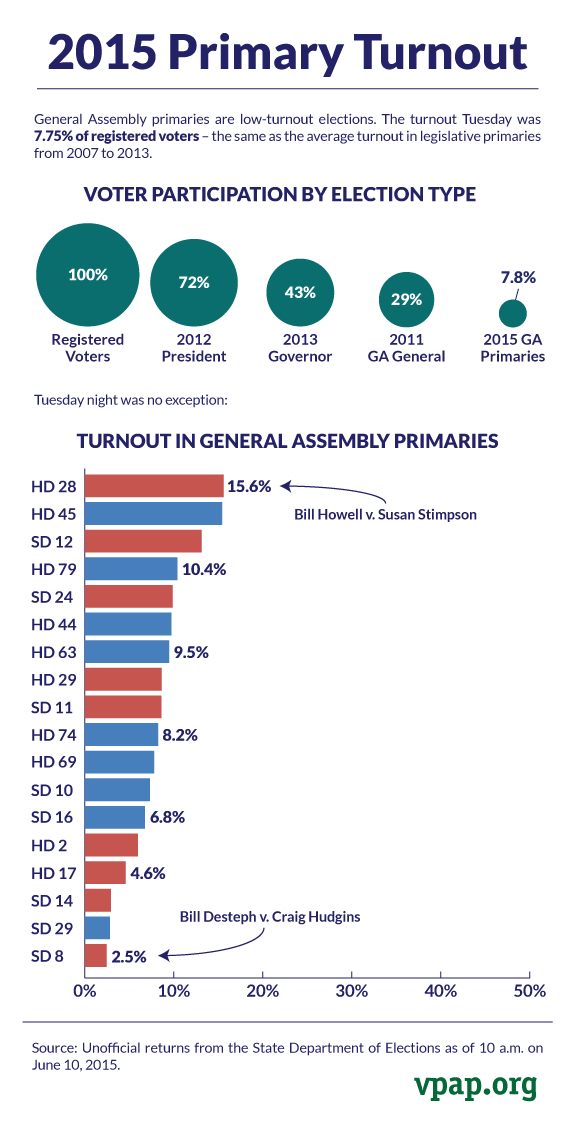 In the 2012 election for President 72% of Virginia’s registered voters came to the polls. In the Governor’s race in 2013, 43% voted. Voter turnout in legislative primaries has consistently been about 7.75% from 2007 to 2013.  Tuesday’s primaries followed the trend. [read_more]

The chart below from VPAP.org shows voter turnout in all Virginia primaries on Tuesday, June 9, 2015,

And in the 12th District, turnout was higher than anticipated. Being in a 4 way race is a tough challenge. Being up against a former Delegate with name ID, against a popular Dr. with great community ties and strong financial backing, and a nice guy who ran a positive campaign. I guess 22% was not too shabby.

Interesting, so Howell vs. Stimpson had roughly double the average turnout. I wonder if the excess helped Howell or hurt Stimpson. Probably doesn’t matter seeing as she got shellacked.

This has been explained elsewhere. Stimpson met her voter number target, plus a buffer. In a normal election (even just the most previous one), she would have been victorious. She lost because Howell was able to drive up turnout and bury her in sheer numbers. Kudos to his GOTV plan/team.

Are you saying that if you normalized these results based on past turnout, she would have been victorious? If so, that’s textbook spin.

You asking that question is racist!

I love it when trolls engage in silly conversation.