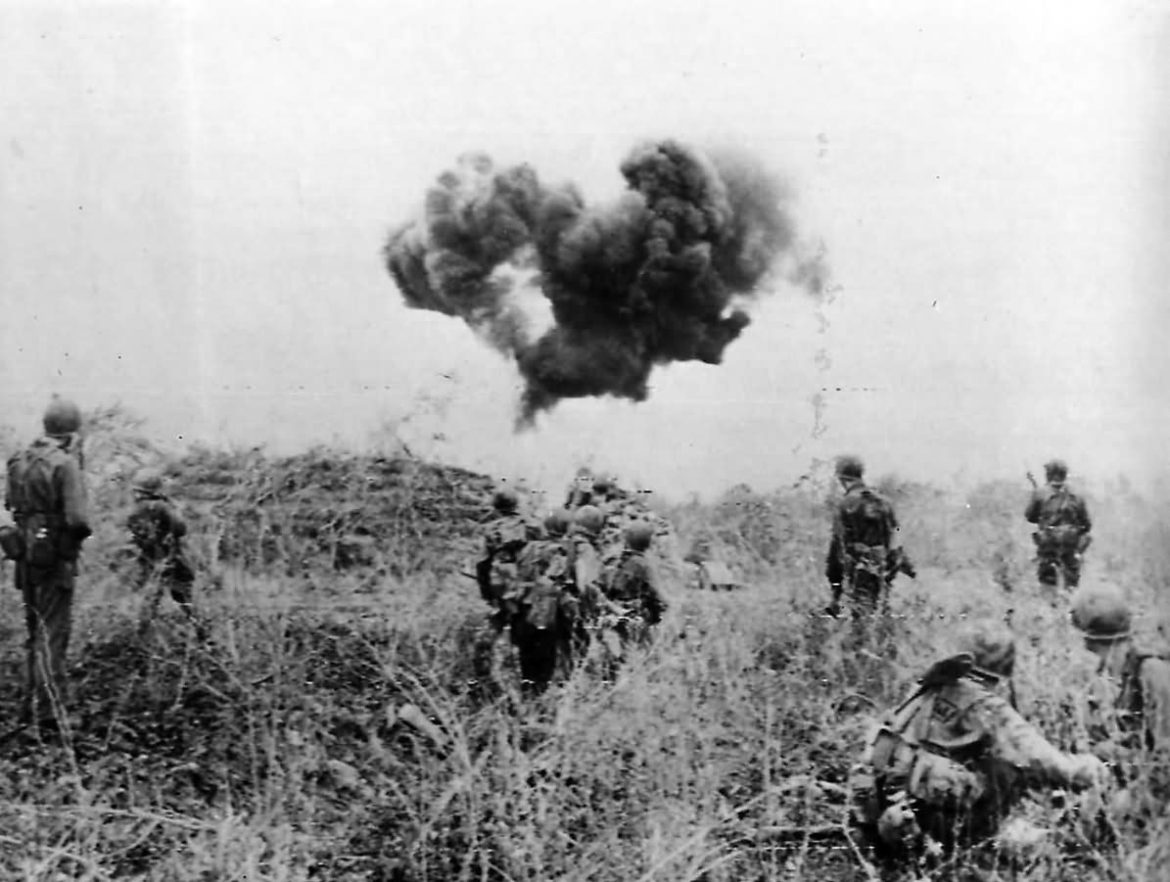 Waging War – then and now

My late New Jersey friend Bill described his “island cleanup” duty as a young officer in the Pacific Theater during World War II. This wasn’t trash-removal detail, but combat operations after the main invasion had taken an island from the Japanese. Primary enemy forces were defeated, but armed remnants were often holed up in caves and underground redoubts across the island. These threats had to be eliminated.

The cleanup was conducted methodically, with covering fire first laid down on a targeted position, followed by grenades thrown from closer quarters. Flame-throwers then burned out any hard-core resisters. Finally, details went in to retrieve the bodies. Bill called it “grim work.” The men became hardened to it, but it was unpopular duty.

On one occasion, Bill’s unit had opened up heavy fire on a cave opening when a white flag was seen waving from the entrance. The captain halted all firing and called for the enemy to show himself. A Japanese officer carrying the white flag approached the American position and saluted.

Speaking English, he asked that his command be allowed to surrender to spare their lives and the lives of women and children with them in the cave. The officer also made a special request. He asked that music be provided so his men could march out and surrender formally. He was, Bill said, quite insistent on that point. Bill smiled as he recalled that his captain – “to his everlasting credit” – agreed to the request.

“Somehow,” Bill said, “we cobbled together a small band of a harmonica, a penny whistle, and a couple of kazoos. As they piped a semblance of a tune, some twenty-five ragged, but correctly uniformed Japanese soldiers marched out in good order, lined up, presented and stacked arms, stepped back, and saluted. Our captain ordered us to attention and we returned their salute. Their commander presented his sword to the captain and bowed, and they saluted each other. Then the captain asked a sergeant to form a squad to escort the prisoners to a rear area.”

Bill recalled that there was a lot of laughter and banter at mess call that evening. “We all felt glad that those guys got to survive the war and live out the rest of their lives. I often wonder what became of them.” Bill had a catch in his voice as he concluded, “It was my most amazing experience of the war…”

The humanity of Bill’s story bridges the chasm of war. But like ‘man bites dog,’ it was the exception, not the rule. During the bitter war in the Pacific the Japanese didn’t do much surrendering. To die in battle was an honor in the Samurai code. The Japanese soldier considered surrender a “disgrace.” One estimate puts Japanese combat casualties at 1.3 million killed and 4 million wounded or missing. By contrast, the USA suffered 292,000 combat deaths and 672,000 wounded or missing across both the Pacific and European theaters.*

Even as children, my generation learned that war is a terrible business. In junior high school, in the mid-1950s, we watched films of the “island cleanup” Bill spoke of. We saw flame-throwers saturate pillboxes and caves with liquid fire, enemy soldiers shot down as they fled, and blackened corpses stacked up like logs. Bulldozers plowed thousands of dead Japanese soldiers into mass graves.

If there is such a thing as a “civilized war,” the Pacific was not it. Japan kicked things off ruthlessly with Pearl Harbor and Bataan. We fought back with a deadly ferocity that the enemy understood and respected. Their defeat, following two catastrophic atomic bombings, was total.

Although the films I described sound horrific, they were actually edited and approved by military authorities before becoming newsreel footage. Far more grisly film was probably available, but reporters and correspondents – who often landed with the troops in an invasion – were not free to send unmonitored reports or film to the States for publication. Everything was assessed for its effect on the war effort and on civilian morale, and whether it would benefit the enemy, before the American public read or saw it.

Today, such controls seem not to exist. Reporters “embedded” with our military units apparently have unlimited license to make their own judgments about what they report, film, and show directly to the American public. War, in all its grim horror, is brought directly into American homes for families to watch as they eat dinner. Ken Burns’ recent documentary on the Viet Nam War brought all that back again.

More significantly, this freedom now allows specific battle actions to be taken out of context, micro-examined, and judged by commentators and TV talking heads who know nothing about combat dynamics, risk, unit cohesion, irregular combatants, or the “fog of war.” Such was the case with an incident involving a young marine who was filmed shooting what was described as a “wounded, unarmed combatant” during the final stages of a 2004 battle for Fallujah.

NBC photographer, Kevin Sites (whose photographs were featured on many anti-war websites), video-taped the incident and handed it over to his network, noting that he did not think the wounded Jihadi was a threat. Tom Brokaw and other network commentators trumpeted the incident as Exhibit A of American “atrocities” in Iraq. The networks seemed determined to deconstruct and defeat the US war effort with such reports.

More details about the incident soon emerged. Evidently, a member of the same marine unit was killed the day before when he checked on a wounded enemy combatant’s condition. The Jihadi’s booby-trapped body exploded, killing the marine and wounding five others. Earlier that same day the soldier involved in the publicized shooting was wounded in the face when an injured Jihadi fired on him. Later, when that marine saw movement from a covered body lying in a mosque he shouted that the Jihadi was “faking it” and opened fire. The Jihadi was not a prisoner and was not attempting to surrender.

In their rush to judge this young marine, media commentators didn’t ask what kind of enemy puts armed combatants and weapons in a house of worship or a hospital. (The mosque where the shooting occurred contained large quantities of arms.) Soldiers finding that the rules of warfare have been thus violated were under orders to treat such places as legitimate zones of combat.

Any reasonable person would agree that Jihadis don’t get to suspend the Geneva Convention when they choose, then reclaim its protection when it suits them. A wounded combatant may not expect non-violent treatment and medical care if he acts in a hostile manner, tries to escape, or threatens our soldiers. A marine made a split-second decision because he knew Fallujah Jihadis were doing this. It was wrong to judge his reaction.

The bigger question is: what are we going to do with the American news media when we have to engage a ruthless foe, as we have been doing since 2001? In the Pacific War, reporters could have made American forces look like barbaric savages by publishing film of incidents taken out of context. Military censors could not have stopped it. But reporters didn’t do this because they knew it would harm our troops and our war effort. They were our trusted allies in a war to restore peace and freedom to the Pacific and to the world.

Today, actions of some media-arms have made us question if they really are allies in our war against world-wide Islamic terror. Calling that Fallujah incident a “war crime” and an “atrocity” was deeply damaging to the morale of our fighting forces and our people at home. Those who claim it is a “moral outrage” have no concept of the reality of battle.

Our troops were not trying to control a few kids blowing off steam on Friday night in Biloxi. They were (and are) engaged in deadly serious combat with read bad guys who use real guns and real bullets to inflict real wounds and real death. We had no right to judge if a soldier in the heat of battle – like this young marine – had assessed a life-and-death situation as we might do from the comfort and safety of our living room armchairs.

It is over 70 years since we fought a war that actually threatened our homeland. Even then, the threat was minimal. Our oldest citizens might remember German U-boats sinking ships off the New Jersey coast, and a Japanese submarine shelling oil fields near Goleta, California. A colleague recalled how he and other children in Washington State were warned about Japanese balloon-bombs. The Japanese released over 9,000 of them to be carried by high altitude winds to North America. About 1,000 of them made it. There were 285 incidents, and six people were killed. Contrasted with what England, Germany, Japan and Russia suffered,* this was small stuff.

We have to go back to the Civil War for a time when any part of our country suffered significant war damage. Except for sporadic domestic terrorism, we are inexperienced with serious war. The 9/11 attack was a terrible shock, so we try to forget it happened. Psychologists call this “denial.” Our news media are in denial, too, as they try to convince us that our ongoing war in the Middle East has more to do with American “war-mongering” than with world-wide terror. ‘We need to forget 9/11 and move on,’ they say. ‘Our wars make Halliburton and Big Oil rich. It’s not about terrorism. It’s the wrong war, in the wrong place, at the wrong time. We need to offer the Table of Brotherhood, not bombs. Yadda, yadda, yadda…’

Throughout Mr. Bush’s terms the major (i.e., liberal) media beat the lie-drum: “Bush lied, Bush lied, Bush lied…” He “lied” about Iraq’s linkage to Islamic terrorism; he “lied” about weapons of mass destruction in Iraq; etc. Their attempt to elect John Kerry failed, so they set about demoralizing our soldiers and discouraging the public. Finally they put a peacenik in the White House who withdrew our forces and gave the enemy space to revive, reform and retake regions our soldiers had won at dear price. The media’s conduct was not that of a loyal ally. This would never have occurred during World War II.

Something needs to be done to control the media during wartime. And it needs to be done soon. Mr. Obama had no interest in doing so. Hopefully Mr. Trump will. Freedom of Speech has its limits. No one gets to cry ‘Fire!’ in a crowded theater. We can’t let a fifth column endanger the country by undermining our ability to wage war.