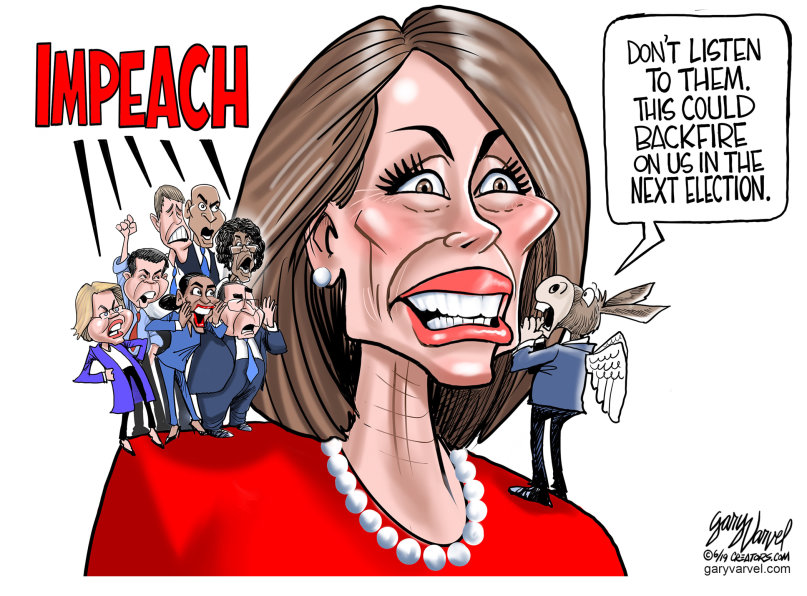 Following the House of Representatives’ December 18 passage of two Articles of Impeachment of President Donald Trump, the political and media establishments have been breathlessly speculating about when (or whether) Speaker Nancy Pelosi will “release” the two articles to the Senate for trial. Various political pundits and commentators seem to take it for granted that the Senate cannot proceed until Mrs. Pelosi formally forwards the enacted articles. And talk-radio heavyweight Rush Limbaugh has opined that the Speaker will not release the articles unless she is sure that a conviction will result. He believes she will “hold” them indefinitely to deny Mr. Trump the vindication of Senate acquittal.

In these extraordinary circumstances, it seems prudent to examine what the U. S. Constitution actually says (and doesn’t say) about impeachment and conviction of public officials, including the president:

The House of Representatives shall choose their Speaker and other Officers; and shall have the sole Power of Impeachment.

The Senate shall have the sole Power to try all Impeachments. When sitting for that Purpose, they shall be on Oath or Affirmation. When the President of the United States is tried, the Chief Justice shall preside: And no Person shall be convicted without the Concurrence of two-thirds of the Members present.

Judgment in Cases of Impeachment shall not extend further than to removal from Office, and disqualification to hold and enjoy any Office of honor, Trust or Profit under the United States; but the Party convicted shall nevertheless be liable and subject to Indictment, Trial, Judgment and Punishment, according to Law.

It’s obvious that these Clauses contain not a single word about articles of impeachment being “held” – but not released – by the Speaker, after their passage by the House of Representatives. The idea that the Speaker possesses such authority is entirely extra-Constitutional. Mrs. Pelosi has fashioned it to suit her purpose of inflicting maximum political damage on the president without letting him defend himself against the charges or receive the acquittal which the Senate would certainly give.

Knowing that their flimsy impeachment charges could never convict Mr. Trump and expel him from office, Democrats believe they have found a way to let the president twist in the wind – accused, smeared, hammered, but never tried and exonerated – while they continue to denounce him in inflammatory public statements. They are trying him in the Court of Public Opinion, but not in the Senate, as the Constitution specifies.

This goes well beyond the scope of routine Congressional nonsense. You don’t have to be a constitutional juris doctor to see that it stands our system of orderly governance completely on its head. To grasp this, suppose that the Congress passes some new law and the president signs it. It is thus, by Constitutional definition, enacted. No further action is required for it to be applied in full force. But then the president “holds” the law, declaring that it is not in force until he says it is. Could that action pass muster in coffee shops, faculty lounges, or the halls of the mighty? (I leave it as an exercise for my readers.)

Obviously that hypothetical case is absurd. An almighty stink would be raised, should any president attempt it. But this is exactly what Speaker Pelosi is trying to do with the articles of impeachment which her House majority has passed. Those articles now essentially amount to enacted “law,” by Constitutional definition. They have been duly passed, and neither the speaker, nor the president, nor the courts, have any further role to play with them. The articles do not have to be “forwarded” to the Senate, as they are already a matter of public record.

Only the Senate now has a role in consideration of the impeachment articles. Senators will sit as “jurors” when evidence is presented and witnesses are heard. The “ball,” is now in the Senate’s court. Mrs. Pelosi can stand outside the Senate and shout through a bullhorn. She can jump up and down and turn cartwheels on the House dais. But she cannot hold up the Senate’s proceedings until her process-demands are met. Her work is done.

On with the show.