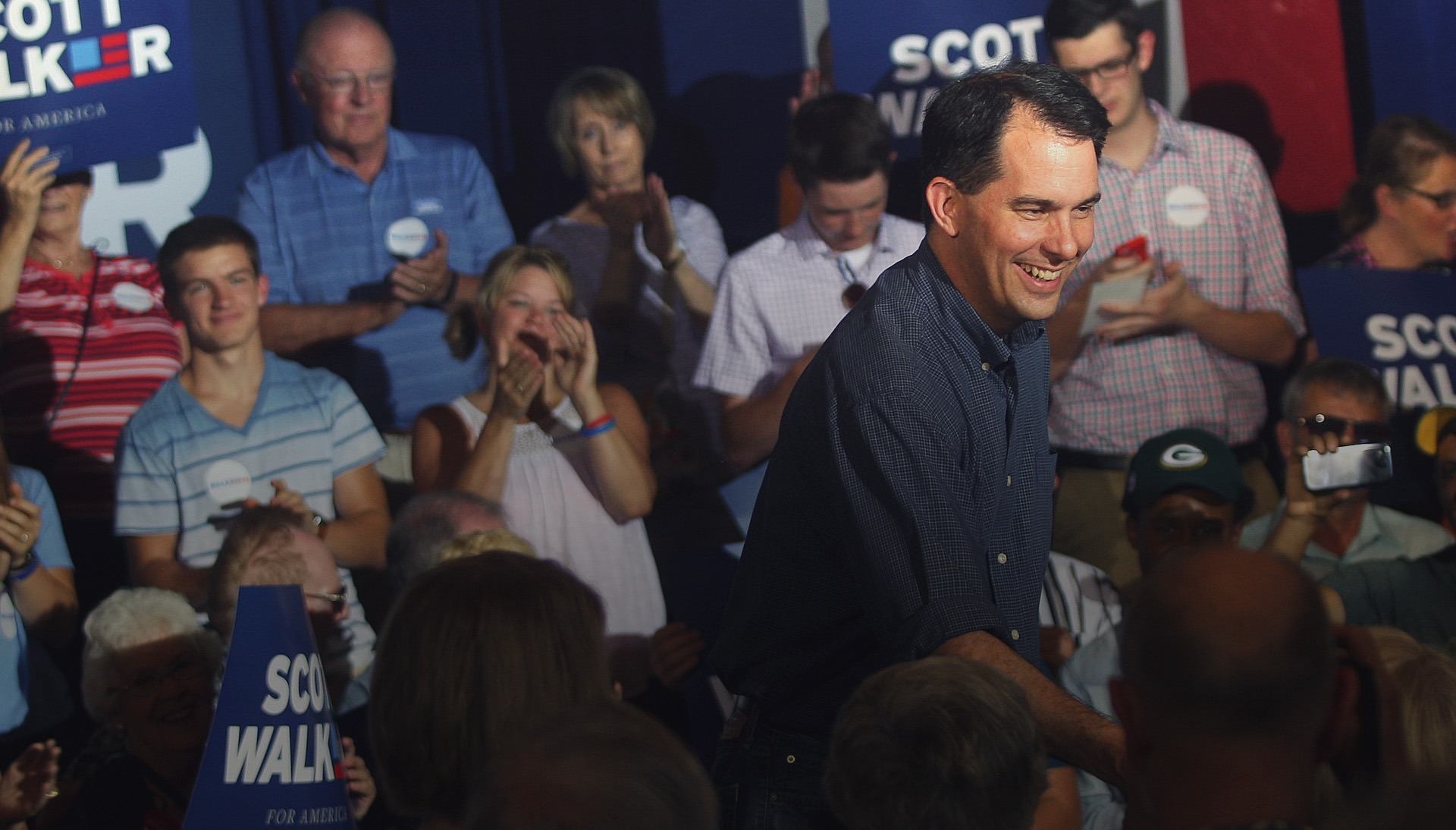 Walker taking off in Virginia

The Wisconsin Governor is making sure Virginia Republicans know he means business in the Old Dominion.

Last week, Walker tapped former Attorney General nominee and current Sen. Mark Obenshain (R-Harrisonburg) as Chairman of his Virginia campaign. Obenshain’s support is a huge prize for any candidate, as he is universally well-liked and has a personal network of political allies across the state that is second to none. Smart move by Walker.

The pick also shows that Obenshain continues to think about the future. Alignment with Walker is all upside for Obenshain, with very little risk. Walker is among a handful of candidates with a good chance of winning the GOP nomination, and like Obenshain himself, Walker is demonstrably conservative without some of the trappings that alienate the more moderate wing of the Party. Even if Walker loses, Obenshain wins by increasing his stature by associating with a credible, well-liked national figure like Walker.

This week the Walker campaign announced the hiring of Chris Leavitt as their statewide coordinator. Leavitt is a veteran of Ed Gillespie’s 2014 near-upset in his bid to unseat Sen. Mark Warner, and before that ran Obenshain’s 2013 race for Attorney General. Leavitt is young, but an experienced hand who will serve Walker well.

Topping off a good week for Walker in Virginia will be two events this weekend. First, a midday fundraiser in Charlottesville, followed by a late-afternoon visit to the Prince William Area Young Republicans’ Jeffersonian Grillfest: 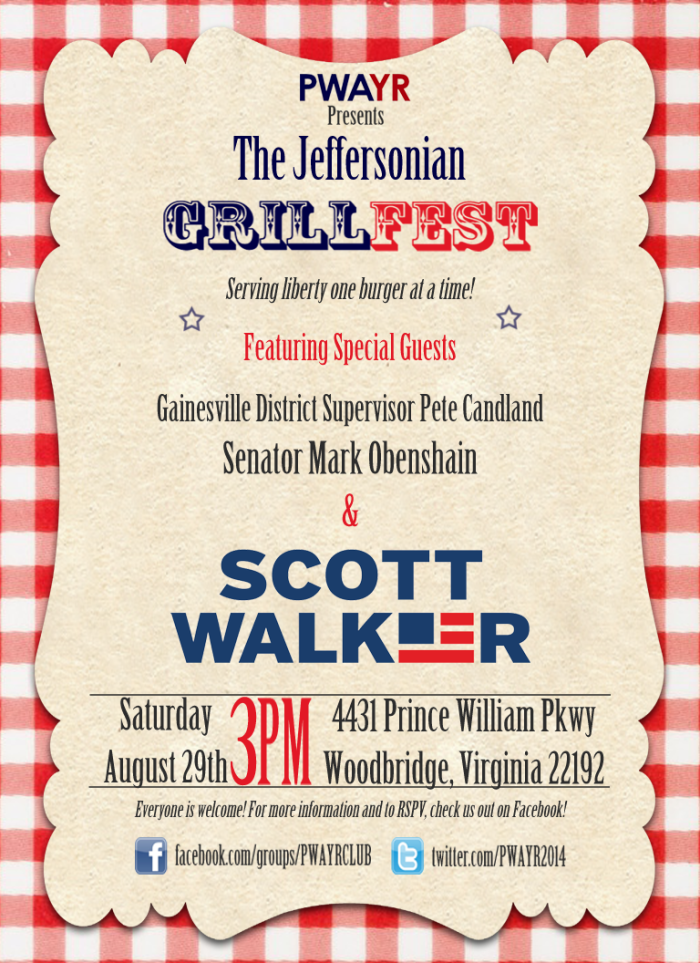 At least when it comes to organization, Walker so far is showing he has a considerable lead on the other campaigns in Virginia. While other candidates have begun quietly hiring staff and tapping top advisors, none have made the kind of high profile splash that Walker has.

That will change soon, of course. Stay tuned.

Walker taking off in Virginia was last modified: August 26th, 2015 by Chad Ochocinco

[…] years.  After running Obenshain’s 2013 bid, and managing Gillespie’s 2014 campaign, Leavitt is now statewide coordinator for Obenshain’s pick for president, Scott Walker.  That race will end in time for Leavitt to turn in earnest to the 2017 race, and then […]

The problem as I see it is that Walker may be taking off in Virginia as you say. However, we have another guy named Trump, who has already took off in America, and who is already at cruising altitude.

The leaders of the packs right now are Trump and Hillary. As long as the media keeps up their attacks on those two, we will know that they are not only in the lead, buy wayyyy out front.

Hillary decided to get the investigations over early if at all possible. Trump grows stronger every time he opens his month.

Using accepted standardized measurements for intelligence, Trump is by far the most intelligent candidate from either party.

I’ve spent some time in Iowa recently working in another candidate’s organization and I can attest Walker’s team there is in trouble, his crowds are small and not particularly enthusiastic, he has steadily lost ground and fallen back in the pack and the local’s frequent comments are he is constantly shifting his positions and is difficult to get a straight answer out of on the stump. I have no idea what is going on in Virginia but he is quickly becoming a non factor in Iowa. A long fall off from his early polling numbers and most certainly not all due to Trump as he is losing ground across all the major players. Hard to see if he performs this poorly in the early primaries how he will survive to Virginia. Just one person’s opinion but I have seen the majority of them by now and he is not terribly impressive in the campaign grind.

Competent operations/staff and state by state ground management are key to winning, if a candidate displays both in key states they increase their chances of winning the nomination. As much as people want to put stock in Trump, and I understand the appeal, where has he displayed the necessary knowledge to implement a state by state operation worthy of leading into a general election?

so is the current wisdom that Obenshain accepted Walker’s offer of state chair because Walker will win Va?

it does have a Romney-Bolling feel to it

I was at the Mason District (Fairfax County) meeting last night and someone did an informal poll. Approximately 7 out of the 12 present wanted Walker for President. BTW, The question was also asked about VP and Carly was the most mentioned by far.

I could get on board with that ticket!

Would somebody tell me how a Walker/Fiorina ticket is not an establishment ticket?

Give me a definition of “establishment” first, so we’re not talking past each other.

The very short definition would be, “the relatively small percentage of wealthy elitists who actually control this country. The status quo who insist there shall be no change.”

It would seem that to run for president these days, one needs to first find a billionaire to cozy up with first.

You mean a billionaire to cozy up with like Trump?

In any case, I don’t think Walker or Fiorina fit your definition. Walker maybe a bit more so than Fiorina, but I think they have both demonstrated a willingness to shake up the status quo, and neither of them are campaigning from the pockets of their benefactors, unlike certain others.

Koch heads shake up the status quo? And whose pockets ARE they campaigning from?

I do not think that word means what you think it means. Koch is a minor Soros. But go with whatever boogeyman you prefer.

Both Walker and Fiorina would make fine presidents that might be able to hold the Republic together until it can heal. Trump as the GOP nominee would be a wild and crazy ride, but he would make a good president in the long run. Trump as a 3rd party would probably ensure a Dem or Bush win which will destroy the party and the Republic.

Yes, that is why it must be crushed. It will be Bush and whoever fits the optics du jour.

Great ticket! Works for me!

I too have said that…Walker – Fiorina. She has the fire, he has the temperament and mettle. In any case, I want her and a governor to be our one-two punch. We need a female on the ticket, and someone who is articulate….not another Sara Palin. Thus, we need a proven governor.

She will be smeared more than Sara, hopefully she will not share the enemies within as did Sara.