WaPo Finally Catching on to the Medicaid Expansion Endgame 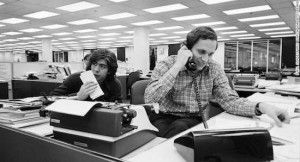 We at The Bull Elephant have been beating a particular drum about Medicaid Expansion in Virginia for some time now.

Recognizing the political imperatives for each party, we’ve been looking at a showdown on the budget that has to have some “third way” type of resolution. The new Governor, with his assertive majority in the Virginia Senate, has made Medicaid expansion under Obamacare his signature issue. The House Speaker, and bolstered by his rank-and-file Republican majority, has spoken endlessly about GOP resolve against it. Both sides profess an unwillingness to let state government—with its funding for local first responders, schools, and transportation—actually shut down in the absence of a deal on Obamacare’s Medicaid expansion.

We’ve written extensively about how the Governor will believe he has the authority inherent in the executive to manage the state’s Medicaid plan many times, and how the same appropriations that would allow Medicaid expansion through the special legislative commission established last year (as part of the Governor “Rolex” McDonnell’s deal to secure his taxportation plan) to expand Medicaid would be available to Governor McAuliffe. Our latest efforts on this subject are available here and here.

Now, it seems, as the state approaches the moment of truth, the Washington Post and other media outlets are finally catching on. Although The Washington Times made mention of this possibility as early as April 6, the WaPo has only now seen its way to explore the story in a modicum of depth:

Virginia Gov. Terry McAuliffe is considering expanding health coverage for the poor without the approval of the state legislature, a move that would muscle his top priority past Republican opponents but also throw his young administration into a partisan firestorm and uncertain legal territory.

McAuliffe and his top advisers have consulted lawyers, health-care experts and legislators on how to bypass the GOP-dominated House of Delegates, according to three people familiar with the discussions. A fourth, who like the others spoke on the condition of anonymity because they were not authorized to reveal private strategy, said the office of Attorney General Mark R. Herring (D) has been researching the matter.

Yes, and the House GOP has been researching this matter since last year, before the election.

It is a good thing that Laura Vozzella has started to catch on to this issue, and it’s good that her audience is finally being told of the very real possibility that this year’s budget standoff may end up yielding a Medicaid expansion done entirely by the Governor’s own hands. Hopefully, soon, she’ll also catch on to the real the roots of our current “impasse.”

Might we be wrong? Perhaps. But after unsuccessfully asking so many times for knowledgeable people close to the process to convince us otherwise, we’re left only with the hope that we’re being too suspicious. The facts, so far, suggest otherwise.

WaPo Finally Catching on to the Medicaid Expansion Endgame was last modified: May 2nd, 2014 by Chad Ochocinco

Herring and McAwful must be removed via petition and recall. They are both exhibiting hubris and are ruling as if they are despots.

Let me know how that works out for you, ok? Meanwhile, the weather’s fine in Realityville.

You can either fight this or enjoy the tyranny, Bruce. YOUR CHOICE…

“Petition and recall” have a 0% chance of working. Minus 6 points for that. We’ll deduct another 5 points for the false dilemma.

I prefer to spend my efforts on something that has an actual chance of succeeding.

“Petition and recall” worked pretty recently to remove the Mayor of Portsmouth.

That’s another seven points off for even thinking that (James Holley = Terry McAuliffe OR Mark Herring).

Disgusting and ruinous to Virginians. Fascism and crony socialism is alive and well in Virginia.