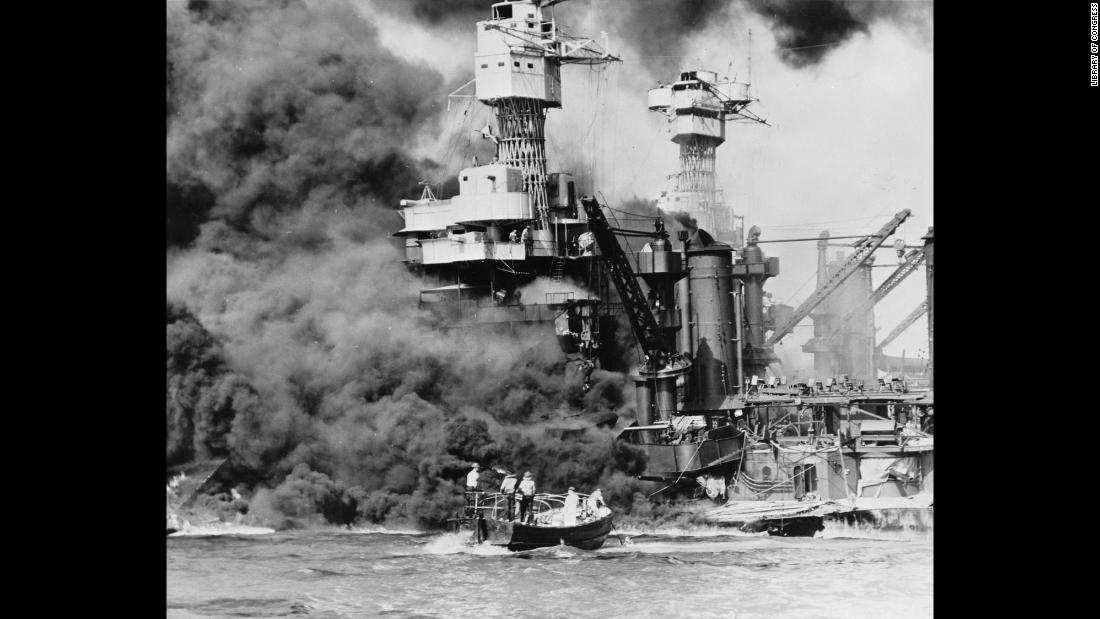 ‘Yesterday, December 7, 1941 – a date which will live in infamy – the United States of America was suddenly and deliberately attacked by naval and air forces of the Empire of Japan.

‘The United States was at peace with that nation, and, at the solicitation of Japan, was still in conversation with its government and its Emperor, looking toward the maintenance of peace in the Pacific.

‘Indeed, one hour after Japanese air squadrons had commenced bombing in the American island of Oahu, the Japanese Ambassador to the United States and his colleague delivered to our Secretary of State a formal reply to a recent American message. This reply stated that it seemed useless to continue existing diplomatic negotiations, but it contained no threat or hint of war or of armed attack.

‘The distance of Hawaii from Japan makes it obvious that the attack was deliberately planned many days or even weeks ago. During the intervening time the Japanese Government has deliberately sought to deceive the United States by false statements and expressions of hope for continued peace.

‘The attack yesterday on the Hawaiian Islands has caused severe damage to American naval and military forces. I regret to tell you that very many American lives have been lost. There is no blinking at the fact that our people and our interests are in grave danger.

‘As Commander-in-Chief of the Army and Navy I have therefore ordered our armed forces to stand down and assume a defensive posture, to avoid provoking the enemy. I have further ordered curtailment of all commerce, and have directed all citizens to remain safely closeted in their homes, in order to prevent any further injury or loss of life.

‘No matter the cost to our economy, we believe we can ride out this storm without any further casualties.’

Did Franklin Roosevelt really conclude with those final lines to the Congress on December 8, 1941? No, he certainly did not. Instead, he concluded by saying:

“The facts of yesterday and today speak for themselves. The people of the United States have already formed their opinions and well understand the implications to the very life and safety of our nation.

“As Commander-in-Chief of the Army and Navy I have directed that all measures be taken for our defense, that always will our whole nation remember the character of the onslaught against us.

“No matter how long it may take us to overcome this dastardly and unprovoked attack, the American people, in their righteous might, will win through to absolute victory.

“With confidence in our armed forces, with the unbounding determination of our people, we will gain the inevitable triumph. So help us God.”

Try to recall when an American politician has used the phrase “righteous might” since FDR’s “day of infamy” speech. (I can’t recall one, either.)

The headline in our daily newspaper of March 19th proclaimed (in giant letters) that we are now on a “War Footing,” because of the Corona virus. A war footing? Really? There’s plenty that I don’t know, but I have lived through several wars, and I don’t recall one where state governors ordered all commerce to cease and all citizens to stay indoors and stop working.

In my experience, which goes back a-ways (although not quite to the Civil War, as my grandchildren might imagine) a war footing always meant ramping up to full industrial production, continuation of daily commerce, and resumption of normal life and activities to the greatest degree possible. There existed a fundamental resolve, at every level of society, that no foreign enemy should be able to disrupt our culture and our way of life.

In our last big war – the one that FDR launched with his famous speech – we did experience shortages and rationing of some foodstuffs and products (meat, sugar, gasoline, tires, cars, etc.). But that was due to diversion of food and supplies to our armed forces, and conversion of some industry to production of arms and materiel needed to fight the war. There was no panic-buying of toilet tissue at grocery stores.

During our 1940s war, schools were not closed, but students were warned about certain dangers in some parts of the country. Late in World War II we learned that the Japanese had launched thousands of weather-balloons, equipped with explosive and incendiary devices, in the expectation that high-altitude winds would carry them to our western forests. Japanese planners hoped the balloons would make landfall and set forest fires – thereby damaging what they believed to be one of our key strategic resources. A former colleague of mine, who was then a schoolboy in Seattle, Washington, related how he and his classmates were warned not to approach the balloons, but to report any sightings to authorities.

On the battlefield, our armed forces were not ordered into unwise operations against the enemy. Prudence was always observed, to the greatest extent possible. But war was waged, and many lives were lost in the achievement of military objectives considered essential to defeating the enemy. This is also part of a true “war footing.” When you’re at war, things get blown up and people get hurt.

Civilian casualties are certainly not desirable in a war, but experiencing them doesn’t mean that you stop fighting and halt the country’s entire industry and commerce. The nation’s conduct in the face of attacks on your armed forces and your civilian populations is a matter of both form and substance. It sends a signal to both current and potential enemies. If a few civilian casualties can spook us into quitting, our enemies will conclude that we lack the will to fight a serious war. This can invite future attacks from enemies who believe they know how to beat us.

Today we’re in a new “war” – not against literal soldiers with guns and bombs, but against a virus that has been carried into our country. It appears to have originated in the Chinese city of Wuhan. We don’t know if it was introduced deliberately or accidentally. But how we conduct ourselves will send important signals to our current and future enemies. If we show that 23,000 illnesses and 300 deaths – out of a population of 320 million – can cause us to crash our entire economy and throw trillions of dollars of lost wealth into the wind, how long will it be until other foreign nasties throw another virus at us? It’s a kind of blackmail. Once you’ve shown that you’re willing to pay, there’s no end to it.

The USA has the finest health care system in the world – probably the best in history. We are blessed with great scientists and doctors who have the experience and knowledge that will help them find ways to treat and finally defeat this pestilence. And they will get it done, if we let them get away from the television cameras long enough to do some work.

Today I read that some 75 million residents of Connecticut, Illinois, New York and California have been ordered to remain indoors. Their governors have essentially shut down their state economies. Has anyone noticed that those states are all governed by Democrats? Are they just being more responsible than other states, or are they hoping that this manufactured recession will be the “big one” that boots Trump and brings in “good old Joe” to fix everything? Call me a conspiracy-nut, but I don’t like the smell of it.

By all means, let’s be as careful as we can – washing our hands frequently and making liberal use of Clorox wipes or similar products. Let’s avoid large gatherings that include people we don’t know. Keeping our distance from others probably makes sense. Let’s avail ourselves of testing and, of course, let’s make sure that sick people get the treatment they need. More than that, let’s not rely on undependable foreign sources for production of vital medicinal drugs. We need to make these products here. (I don’t think we relied on Japan for aircraft-production during the “late unpleasantness.”)

But shutting down the whole country? Throwing millions out of work? Wiping out life-savings and retirement investment-accounts? Adding trillions to the national debt? Come on, people. We can do better than this. We’ve been at war before. If we’re at war, let’s act like it. No more skulking below-decks as though we’re afraid of the dark.

Back in the day, when the Germans were bombing England all to hell, Britons were lucky enough to have a guy named Winston Churchill in overall charge. As they were enduring the full fury of the enemy, the prime minister made a memorable speech to the nation and the world in which he said:

“Hitler knows that he will have to break us in this island or lose the war. If we can stand up to him, all Europe may be free, and life of the world may move forward into broad, sunlit uplands… Let us therefore brace ourselves to our duties, and so bear ourselves that if the British Empire and its Commonwealth last for a thousand years, men will still say: ‘This was their finest hour.’”

We’ll come through this. Let’s start now – together – and let’s get back to work.