Panda twins born at the National Zoo, one survives. Pictures and videos

After years of trying, and the loss of a 6 day old cub in September, the National Zoo Â finally has a panda cub. Their Giant Panda Mei Xiang had a cub born Friday at 5:32 in the afternoon after a brief 2 hour labor. Â  Like all newborn pandas the infant is a scrawny, ugly, little thing, hairless and weighing in at around 4 ounces, the size of a stick of butter. Â  Zoo officials had not been certain that Â Mei Xiang was pregnant until very recently because she was not cooperative when they made several attempts to do an ultrasound to detect a cub. Â (Who thought a mama panda would cooperate with that?) Â The film of the birth and the story are here.

Then sad news came from the zoo last night. Â A second cub was stillborn, 26 hours after the first cub was born. Â Mei Xiang tried hard to bring the cub to life, but the cub was never alive and she couldn’t change that, despite her best efforts. Â The sad story here. Â Â  Meanwhile the first cub continues to do well.

A live video feed of the panda mom and cub on the National Zoo’s panda cam is availableÂ here.Â  I will warn you, it’s boring. Â Mom and baby sleep most of the time. Â Mom doesn’t even eat or drink for the first few weeks because in the wild if she went off to feed the Â cub would die. Â The infant is very tiny, and very vulnerable, reasons why Giant Pandas are nearly extinct. Â I keep the zoo’s camera feed open on my computer, with the sound turned up, while I do other things on the net. Â If the cub begins to squeal and squawk (he/she has quite a pair of lungs for such a tiny thing) then I flip over to watch. Â That’s when mom and cub are most active and when it might be possible to catch a glimpse of Â little butter stick. Â Mei Xiang is a very attentive mother. Â Even if you can’t see him, it’s fun to hear him.

Twice today zookeepers made unsuccessful attempts to grab the newborn cub from its mother. Â  They had hoped to do a fast wellness check and quickly return the cub to the den. Â Attempting to grab a newborn cub from 240 pound mother doesn’t sound like a good idea. Â Mom was smart and tucked the newborn under her chin. They have never been able to snatch a newborn cub but that didn’t stop them from trying. Â  Story here.Â

The next big thing will be what to name the new cub. Â One suggestion, Northwest, because he was born in Northwest Washington DC. Â That name is cuter for a panda cub than for the poor child who was actually given the name North West by his idiotic celebrity parents.

Our new cub in DC: 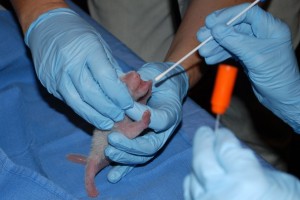 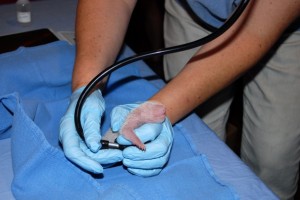 In a few weeks the cub will look like this: 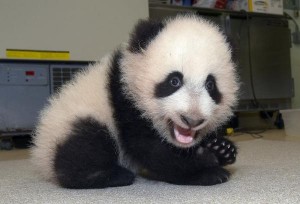 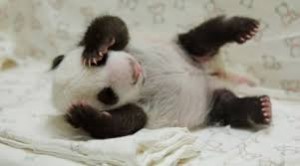 Update: Â On Sunday the surviving cub was examined byÂ veterinariansÂ and found to be in ‘excellent health’, weighing in at 4.8 ounces. Â  The sex of the cub won’t be known for several weeks. Â  Â They also learned that stillborn cub had numerous gross abnormalities. Â Updated story here.Â  Â Picture gallery of our little bundle of joy is here. Â

Panda twins born at the National Zoo, one survives. Pictures and videos was last modified: August 25th, 2013 by Jeanine Martin