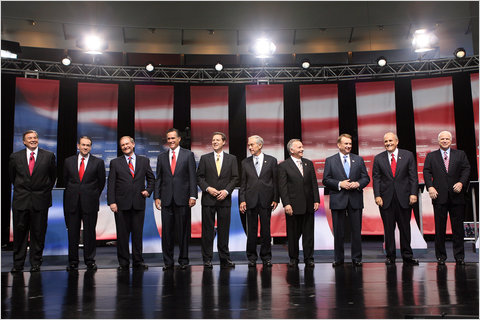 If you have a better idea, I’d love to hear it in the comments section. If you’ve found a flaw in this one, please let me know. But, if you’d like to see something like this happen, please help make this concept a reality. You don’t need to contribute money, I don’t care about your email address, just like the Facebook page and please tell your friends to do the same.

It’s the stupidest idea of the year so far. An organized “Vote for the Worst” campaign puts Rick Santorum (or insert any totally unelectable candidate) against Donald Trump in the finals. The undecided voters will look at that and say “This is the best that they have?”

That’s why half the vote would be determined by the public, while the other half would be determined by a panel of qualified judges, as mentioned in the post. In my mind, those judges would be randomly selected from a pool of RNC committeemen and committeewomen who haven’t endorsed a candidate. Because you’re right, without an adequate counterweight it’d get real ugly, real fast.

So the panel of qualified judges have the ability to cancel out the home viewers votes. Cue the howls of “The establishment is keeping Ben Carson down” and the whole process falls back into the name-calling nutball chaos like it’s always been. Meanwhile, the Democrats laugh.

Would it be worse than the same “establishment” setting an arbitrary minimum polling average and eliminating any candidates who don’t reach the threshold?

That’s the best solution the RNC has been able to offer and would virtually guarantee candidates like Carson never make an appearance at any of the debates. If the lineup was decided today Jindal, Kasich, Fiorina, Santorum, and Huckabee would be excluded as well, depending on how many candidates the “establishment” wants to see on stage.

The idea I’ve offered isn’t perfect, but at least none of the eliminations would be arbitrary, they would be transparent, and they could be affected by people like you and I. Give me a choice, and I’ll choose the latter every day of the week.

EDIT: Somehow, I forgot to bring up the other problem with the “establishment” arbitrarily eliminating candidates at the outset — they have zero reason not to hold their own debates among themselves. Then, you’ve got the A-team debates and the B-team debates, spearheaded by Donald Trump. If you’re the kind who just wants to watch the world burn, this would be ideal. If not, we need to find a better option.

[…] been reported over at Bull Elephant  & Virginia Virtucon, but one of the perks of being friends with the writer is you get […]

Make it a double elimination so the debate can continue against different opponents or round robin like World Cup soccer.

I think Patrick is on to something. Good job. We need to try something different, because the last two primary seasons have been total fuster cluck debacles. One-on-one is the way to go, because the real battle against the Democrat candidate will be one on one.

The Dems can do it also and Shrillary can lose arguments with herself! LOL

The process I suggested would allow more than those 2-3 minute soundbites we see in the past and which would be required if we had 16 on the stage at one time. Limiting it to four speakers at a time, would allow more substantive responses to the posed questions. The Lincoln-Douglas debates (7) consumed 3 hours each!

Why all the pretending?

All the Candidates from both parties are nothing more than Corporate financed puppets. Candidates do as their “Unionized” Corporate masters tell them, or else the campaign cash is cut off.

Just check out this link to see how McAulliffe sold out the taxpayer to Virginia Power for few pieces of silver. HB 1349 was nothing but an auction.

So I take it you are a big fan of the NCAA money making marketing event posing as college basketball glibly referred to as “March Madness”. Maybe the individual political parties could develop profitable merchandising lines to market with the event and the individual candidates could be allowed to wear corporate sanction sponsor’s logos during the televised debates like in NASCAR. Why not make it a quiz show like Jeopardy and we will “give” them the answers but they have to guess the question to win and move on. I think you have a very low opinion of “ordinary” Americans. Perhaps if the candidates presented a few new, fresh ideas the voters might be more inclined to listen rather then the standard poll tested talking points they all endlessly repeat which makes a typical post victory sports interview look like a Oxford Union debate in comparison.

Lawrence, I take it you’ve not a clue what a Lincoln-Douglas debate is hey?

Actually I do and I don’t believe our problem is debate format (Lincoln-Douglas or some other format) our issue is CONTENT and better management of numbers involved focused solely on debate format isn’t going to address that issue, period. By the way only Canadians end an interrogative with “hey”. Just an observation.

There’s definitely a content problem, we absolutely agree on that point. Unfortunately, it’s a problem only the candidates themselves can solve, since there’s no format which forces candidates to give the substantive answers you’re seeking.

We only disagree on whether having sixteen or more candidates on the same stage during the same hour and a half is conducive to reaching and informing voters. I think it’s a problem, you don’t, and there’s nothing I can say to change your mind. That’s cool.

No but their paid consultants, which they all employ, could either encourage or help with that one might expect but strangely that never seems to manifest itself as valued advice or perhaps it’s just that coincidentally every candidate chooses to ignore that particular aspect of their services.

Paid consultants are hired to win elections; they give advice on what most appeals to voters. If anybody who was smart enough to get people to pay them for that type of advice thought that a focus on content was the key to winning votes, they would certainly advise so.

Let me get this straight?

Paid consultants are hired with the corporate cash campaign and PAC donations, to tell Candidates which lies to tell to get elected?

Then, once elected, they go about the business of the American Corporation that financed the telling of the lies that got them elected?

That business being the gutting of the middle-class, shipping jobs to China, and importing illegal immigrants?

Only while the Lizard people are still in Phase II. Things may change in Phase III, after the Bilderberg Group gets involved.

Who’s money is behind them?

Lawrence, this isn’t a money making opportunity for anyone. I think we can both agree the point of these debates should be to reach the most voters, in the most positive way, with the most accurate information possible. I think we can also agree using the same template we’ve used for decades with twice as many candidates would be detrimental to achieving those goals.

It’s 100% okay if you hate the concept I’ve offered. The point was never to promote my own idea, it was to start a much-needed conversation about what the solution should be. I’m very eager to explore different thoughts and ideas, I’d love to hear yours, but we should all be able to agree there’s a problem.

Interesting idea, Bill. It’d probably be more friendly to the candidates, since it’s easier to avoid getting pinned down. Then again, it sets up the potential for three-on-one dogpiles on a candidate leading in the polls by others with nothing to lose. Kind of a double-edged sword.

That said, it’d probably be more likely to actually happen if it were the way you’ve described, since it wouldn’t take up nearly as much time from the networks.

You partially stole my idea — a two hour debate broken into two one hour segments. Half the candidates the first hour by blind draw, the other half the second hour. In the following debate have a drawing where half of each group swaps out. Then maybe start weeding it out starting with the 3d debate.