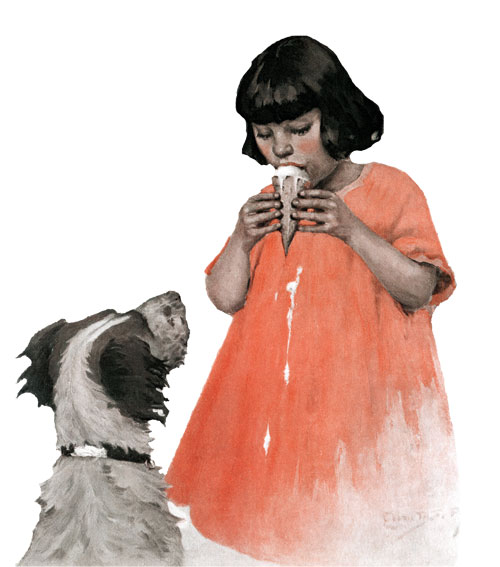 If you elect me, I will give you Ice Cream...

I came across the following passage during a recent e-mail cleanup. It was marked as having originated with a teacher in the Nashville area. Beyond that, I can’t attribute it:

“Who worries about ‘the cow’ when it’s all about the ice cream?”

The most eye-opening civics lesson I ever had was while teaching third grade this year. The presidential election was heating up, and some of the children showed an interest. So I decided we should have an election for a class president as an object lesson. We would choose our nominees; each would make a campaign speech; and the class would vote.

To simplify the process, candidates were nominated by other class members. We discussed what kinds of characteristics they should have. We got many nominations, and from those Jamie and Olivia were picked to run for the top spot.

The class had done a great job in their selections. Both candidates were good kids. I thought Jamie might have an advantage because he had lots of parental support. I had never met Olivia’s mother.

The day arrived when they would make their speeches. Jamie went first. He had specific ideas about how to make our class a better place.  He ended by promising to do his very best. Everyone applauded.  He sat down, and Olivia came to the podium.

Her speech was very concise: “If you vote for me, I will give you ice cream.”

Olivia sat down, and the class went wild.  “Yes! Yes! We want ice cream!” She could have said more, but she didn’t have to. A discussion followed:

How did she plan to pay for the ice cream?   She wasn’t sure.

Would her parents buy it or would the class pay for it?  She didn’t know.

The class really didn’t care. All they were thinking about was ice cream. Jamie was forgotten. Olivia won by a landslide.

Every time Barack Obama opened his mouth he promised ice cream, and fifty-two percent of the people reacted like nine year olds. They wanted ice cream!

The rest of us knew we were going to have to feed the cow and clean up the mess.

This account – which appear to have been written just after the 2008 election – seemed so insightful that I decided to examine it. Of course, it applied just as accurately to 2012, when Mr. Obama promised voters their hearts’ desires if they would re-elect him. They bought his shtick again, so we got another round of the Ice Cream presidency.

Mr. Obama’s 2012 Republican opponent, Governor Mitt Romney, pledged fiscal responsibility, economic recovery, stability, and lower taxes. (Yawn!) But the Obama-crowd didn’t care about lower taxes or responsible government or any other boring stuff. Many of them don’t even pay federal taxes, and those who do expect rich dudes like Mr. Romney to pay more, not less (i.e., their “fair share”). The Romney message didn’t resonate with them because fiscal responsibility is never sexy to folks who get from government. Like Olivia’s class, they wanted “ice cream!” What did they care about where the ice cream comes from, or who pays for it? Just keep dishing it out.

Since reading about the class elections, I have wondered how things turned out for Olivia’s constituents. Did she deliver on the ice cream promise? Or did it fall flat? If the latter, how did the class respond? Perhaps there was a free first delivery to please her voters, followed by a delay while various “details” were ironed out. After that, maybe the ice cream became pay-as-you-go, amid some grumbling from the electorate.

But I could be all wrong on this. After all, furnishing a gallon of ice cream for the class every few weeks isn’t such a big deal for people of ordinary means. Perhaps she carried through, if it was in her nature. If so, bully for her.

I say all this in a spirit of good will and bonhomie toward kids. Having raised some, myself, I understand the importance of not simply stomping every hare-brained idea they might dream up. Better to let them figure out what’s realistic and what isn’t – although a little wise counsel can be helpful.

I loved those halcyon days of learning and growing with my kids. They’re all middle-aged now, so I’m enjoying a second round with my grandchildren. Two granddaughters are married, and one is expecting, so maybe I’ll get a third round with great-grandchildren, should I live so long.

Raising and teaching children can be interesting, as well as productive for them and the country. But voters are not children – at least, they shouldn’t be. 18 is young to be deciding on national policy, which is what we’re doing when we elect a president.

But teens and 20-somethings didn’t go for Mr. Obama for his policies. Instead, he drew great swarms of those voters by projecting a rock-star image. His slim, buff figure looked great in a $2000 Armani suit. He rapped with late-night comedians and shot hoops with the bruthas. He was hip beyond the dreams of hipness. His words flowed like pure gold. Young people dazzled by the glitz, the roaring crowds, and The One’s 1000-watt smile thought he surely must be the answer to the nation’s problems.

Even people old enough to know better believed a former community organizer with no real-world experience would bring harmony, enlightenment, justice, peace and prosperity to America and the world – plus the desired flavor of “ice cream” to every interest group. It would be a true miracle: a deliverance; almost a rapture. Bless the Lord that we should live to see this day! (And let the ice cream flow!)

Politicians have made promises to voters from democracy’s infancy. (Only the fact that democracy was unknown to writers of the Dead Sea Scrolls keeps me from citing them as a seminal reference.) Faced with a choice between ice cream and serious governance, voters have always had to decide whose promises are the more credible and useful.

In the 2008 election, Barack Obama was an unknown quantity, which should have exposed him to questions about his qualifications and plans for office. But various factors – including race-sensitivity – kept both the media and Senator McCain from asking probing questions. Where were the old girlfriends, classmates, law-faculty colleagues? Why didn’t anyone seem to remember him? What was his academic record?

Mr. Obama’s “messiah” shtick promised “change” – a phantom brand of “ice cream” that could mean any flavor to anyone – as he declaimed across the country about the mess his predecessor had left. One rueful voter summed it up: “He just looked and sounded so good!”

Mr. Obama’s enigmatic message and charismatic persona swept him triumphantly into office. Anticipation was high at his inauguration. Great things were expected. Indeed, he had barely found his desk in the Oval Office before the Nobel Committee awarded him the 2009 Nobel Peace Prize. It was going to be a presidency to remember.

It certainly was that – although perhaps not as Mr. Obama and his acolytes might have wished. His tenure’s distinctive features are well documented, so I won’t rehash them in detail. Suffice it to say that two million fewer Americans were working at the end of his presidency than at the start. Only 63% of adult workers were employed – a figure lower than at any time since the Great Depression. Food-stamp recipients went from 28 million in 2008 to 47 million by 2016. Unemployment for black young men was 50% in some locales, and race-relations were in an uproar. The minorities Mr. Obama promised to help suffered most. Had he been a Republican, the media would have been shouting from the housetops about this. Yet not a discouraging word was heard.

At the heart of the economy’s persistent slump was Mr. Obama’s stubborn belief that economics is a “zero-sum game” – i.e., that some parts of the economy can gain only when other parts lose. This claim pleases his low-information and liberal academic base, but it really is complete nonsense. Even Bill Clinton understood JFK’s famous dictum: “…a rising tide lifts all boats.” Economists know – although many didn’t say it – that our economy won’t rebound until it is freed from the shackles of zero-sum thinking.

Mr. Obama’s signature achievement was the Affordable Health Care Act (a.k.a. “Obamacare”) – a government takeover of 1/6th of the nation’s economy that is disliked and opposed by over 60% of the adult population. Mr. Trump won – at least in part – by promising its repeal. Democrats know it’s collapsing like a dead horse, but are naturally digging in to defend it. Weak-kneed Republicans – afraid that the NY Times will accuse them of denying health care to poor folks – are welshing on their promises rid us of this riotously failed turkey. Obamacare’s “ice cream” turned out to be garlic-flavored.

Certain that enough voters were hooked on government-largess, Mrs. Clinton tried to run another ice cream campaign. But the voters were wise to it and weren’t buying. As Olivia could probably tell us, this campaign strategy works only until the ice cream melts or runs out.