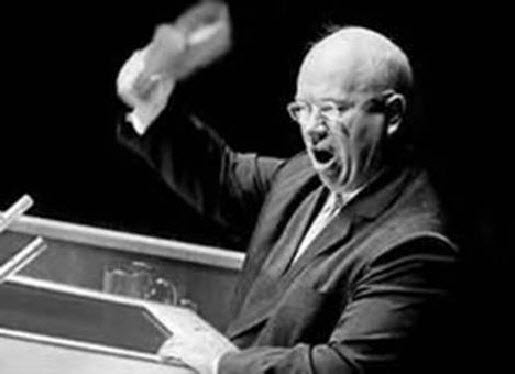 “We Will Bury You”

This article’s title was Nikita Khrushchev’s warning to America in the 1950s. The Soviet Premier banged his shoe on the podium of the United Nations General Assembly while declaiming his famous phrase. Those of us in our teens then thought he was just a semi-comical Bolshie in an ill-fitting suit. We didn’t realize that he was a serious tough guy who made his bones as political commissar of Stalingrad during the desperate days of Nazi Germany’s occupation of the city. Khrushchev enforced discipline and kept the city’s resistance organized during the weeks and months of late 1942, until the occupying German 6th Army could be surrounded, worn down, starved and finally defeated. Older Americans knew that the Soviet Leader was not a comedy-act, but a danger to be reckoned with.

That same warning is being repeated in our time – although not in exactly the same way, nor by any foreign actors. Instead, it is the declaration of a determined cabal of politicians, jurists and civil serpents from the so-called “establishment ruling class,” who have declared war on a sitting president of their own country, and his party. A cadre of reporters and pundits who share that aim are their willing allies. Business-tycoon Donald J. Trump shocked the lot of them when he took the country by storm in 2016 and snatched the presidency from Hillary Rodham Clinton, who had expected voters to award her the crown she thought was rightfully hers.

Since 9 PM of November 8, 2016, when Mrs. Clinton’s acolytes realized that the impossible had actually happened, that cabal has done everything to harass and wound the brash, unrepentant outsider, short of hiring a literal assassin to take him out. But there is still time to bring in Guido and his pals through Mexico to solve the problem “with extreme prejudice.”

Old-timers shaking their heads and declaring that we’ve never seen anything like this are mistaken. It’s been this bad (and worse) before. A century and a half ago we waged a literal shooting-war on ourselves because some of us thought the wrong guy had been elected. And after he won the bloodiest war in American history, the haters shot him dead as he sat with his wife in a theater. John Kennedy got the same treatment in 1963. Among us are some violent people who are ready to ditch republican-style government when an election produces a result they don’t like. 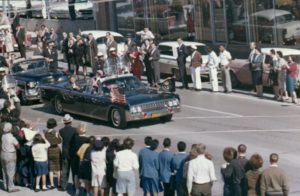 But millions of Americans – probably a strong majority – are willing to stick with republican governance, and will accept the election of political leaders who were not their choice. We might grumble when an election doesn’t go our way, and we might work legitimately to prevent a president’s re-election. But that’s a lot different than working to get him booted out of office by fair means or foul.

What we’re seeing today has been called a “slow coup d’etat.” Its centerpiece is an investigation by a Special Counsel who has been awarded unlimited powers – by the media, anyway – to search for evidence that the president “colluded” with Russians to fix the 2016 election and defeat Hillary Clinton. Media talking-heads speculate wildly about indicting the president, or frog-marching him out of the White House in irons. It’s complete rubbish, of course, but the plotters are flogging that story relentlessly.

After more than a year, Special Counsel Robert Mueller’s investigation into Russian collusion has cost taxpayers at least $17 million, while producing no evidence that anything of the kind occurred. Several minor figures in the Trump orbit have been indicted for crimes that occurred long before they were associated with Mr. Trump’s presidential run. Paul Manafort – who served as Mr. Trump’s campaign manager for three months in 2016 – has now been convicted on five counts of tax fraud, one count of failure to file a report of foreign financial accounts, and two counts of bank fraud. A mistrial was declared on ten other charges after the jury could not reach a unanimous verdict.

Last year, Lt. General Michael Flynn – who served briefly as Mr. Trump’s National Security Advisor – pled guilty to a single count of lying to the FBI about his contacts with the Russian government. General Flynn reportedly entered the plea to save his family from financial ruin. More recently, Mr. Trump’s personal attorney, Michael Cohen, has pled guilty to tax evasion, bank fraud, and campaign finance violations. In April of this year the FBI raided Mr. Cohen’s office and seized confidential records and computers in a search for evidence of suspected crimes. The Mueller team had referred those matters to the U. S. Attorney for the Southern District of New York.

I’m neither a lawyer nor a cop, but I think I’m on pretty firm ground when I say that law-enforcers launch investigations to find the guilty parties when a known crime has occurred. In some cases, an untoward event has occurred – e.g., someone falls from a tenth-floor window – so the circumstances are investigated to see if a crime was involved. But allegations that something might have happened, such as a foreign power interfering with an election, are not sufficient grounds for launching a far-reaching investigation that uncovers only unrelated matters.

A time-honored prosecutorial tactic is letting a person cop a plea on a minor infraction – as an alternative to prosecution on much more serious charges – in exchange for providing evidence against a loftier target. It can be effective, if the low-level perp produces tangible evidence that goes beyond mere he-said/she-said. Testimony obtained through a plea-deal is always challenged in court for possibly being tainted or false.

Getting a perp to testify against the “big cahuna” in this way is called “flipping.” Mr. Mueller undoubtedly hopes to use it to discover some illegality or reprehensible behavior that will hurt Mr. Trump – criminally if possible, but politically if nothing else.

By now, even Hottentots in Africa see that the Mueller investigation can find no evidence that Mr. Trump colluded with Russians, or anyone else, to fix the election. Mr. Mueller’s assigned mission was to find that collusion, but now the mission has changed. The revised mission’s goal is two-pronged: (1) to damage the president’s reputation by any possible means; (2) to discourage Mr. Trump’s supporters from voting for GOP representatives and senators in the fall. A Democrat-controlled Congress would:

This chance to bury the GOP and the hated Trump, once and for all, is well worth the effort for dedicated Dems. They see no downside to letting Mr. Mueller’s “investigation” monster-mash on through the entire Trump term. It is a distraction to die for. His disgrace, impeachment, expulsion (if the Great Whoever smiles) and defeat after a single term – if nothing else – will discourage any “outsider” from ever again daring to intrude onto the establishment’s sacred preserve. This is the  golden prospect for fools willing to destroy republican government just to achieve political dominance.

Comrade Nikita did some famous blustering in his time. The USSR did some damage and scared a lot of Americans, but their attempt to bury the USA failed. America was a lot tougher than tough-guy Khrushchev thought. In the end, his whole phony-baloney, KGB-enforced “workers’ paradise” collapsed when Soviet “factories” could not make products at the artificial prices their central planners had set, and the USSR could not keep up in the global arms-race. In 2007 a Russian acquaintance told me that people had carloads of money, but there was nothing in the stores to buy. “Something simply had to give,” she said. “It couldn’t go on as it was.”

The “get Trump” juggernaut seems unstoppable. But it isn’t. The American People have the power to stop the Soviet-style pursuit of Mr. Trump and the endless prosecution of his associates for things they may (or may not) have done in the distant past. In November we can rise up and throw out the varlets and poltroons who would willingly toss good order, undo an election, and mortally wound our whole governmental system to gain power.

The question is not can we, but will we. Do we still have the mettle and unified purpose that enabled us to whip the Nazis and stare down the Russkies? I hope so. To paraphrase my Russian friend: Something has to give. We cannot go on like this. The stakes are too high.

“We Will Bury You” was last modified: August 27th, 2018 by Woody Zimmerman

The President will use his great deal making and leadership skills to force the Democrats to surrender before November. They’ll just resign and concede the election. QAnon at 11.

QAnon to the rescue … riding his unicorn.

Wow! You guys can taste the blood in the water, too! I’m pretty sure you know how this is going to end…

With the House impeaching the President and thus making him more popular than ever. Americans love the under dog and the persecuted. The Democrats are just dumb enough to impeach him, setting him up for a landslide win in 2020.

The msm will continue with their abuse of republicans and conservatives throughout the fall. President Trump has done a good job of attacking the lies, and hammering a lot of the fake news. Maybe Democrats like Eric can’t see it, but independents are supposedly thinkers and they aren’t so blinded.

Unfortunately, Trump continues to create his own fake news. His grotesque behavior and reckless tweets provide easy targets for those seeking to diminish him.

Exactly right. The political environment is eerily similar to 1998, when the Republicans thought they were going to pick up 30 seats in the mid-terms on the basis of Clinton scandals and the imminent impeachment of Clinton. But Clinton was not as unpopular as Republicans assumed him to be. Instead of picking up 30 Republican seats, they lost 5 seats in that mid-term election. Newt Gingrich resigned shortly afterward.

The Dems should be careful what they wish for. The American people don’t take kindly to having their presidents railroaded out of office. If the past is prologue, Pelosi may be retiring soon.