In my last post I wrote about Senator Warner’s wealth, estimated to be between a quarter and a half a billion.   I have since learned that he’s not even close to being the wealthiest Virginian.  That would be Jacqueline Mars whose wealth is estimated at  $20 billion.  Mars is an heir to the Mars Candy Company fortune.  She lives in The Plains in Fauquier county.   Movoto.com blog has a fun, interactive, map of the wealthiest person in each state. 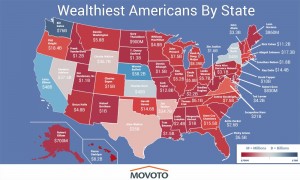 Haha, why? I don’t come close to Senator Warner or Jacqueline Mars.

I never heard of most of these people. I guess that means they still have some privacy.