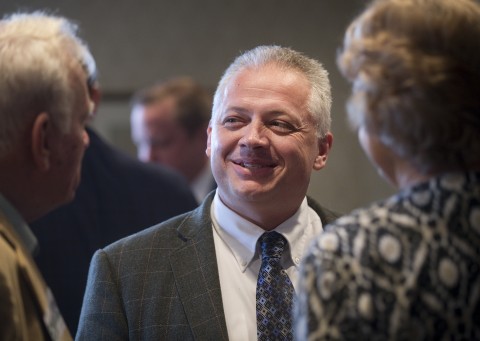 What Denver Riggleman Taught Me About Politics

To my pro-Reeves and pro-Vogel friends: whilst my hypocrisy apparently knows no bounds,  I must say that the negative campaigning between the two camps is a serious turn-off. These are two conservative and outstanding State Senators and to pretend otherwise in order to make your candidate appear to be the only conservative choice is a serious mistake. You can’t win a general election if everyone who supported your opponent hates you.

Denver Riggleman taught me a lot about how an aggressive pursuit of issues and the no-nonsense approach to calling corruption “corruption” doesn’t have to come at the expense of your opponents. Either they are taking principled stands on the issues, or they are not. Let the voters decide.

Denver demonstrated the ability to attack the issues as if he was planning a MOAB drop in Afghanistan. He didn’t have to take personal shots at his opponents in order to make his points or elucidate his arguments.

I admit that, for most of my politically-active life, I have engaged in attacks on candidates that I felt were selling out the Founding principles of this nation or lying about their commitment to the Conservative Tradition. I believed that “the bad guys” were somehow fundamentally bad. I believed they had nefarious intentions. The more time I spend with politicians and their staff, the more I realize two very important things: one, there is a ridiculous amount of room for rational disagreement; and two, solutions in Richmond and Washington D.C. aren’t half as simple as we make them out to be.

If something is wrong and needs to be fixed, then talk about that something. If you make a convincing argument, the media will force every other candidate to take a firm position on your issues. If they take squishy positions, the voters will recognize it and respond accordingly. There is no need for personal attacks.

I have no problem with folks talking about Frank Wagner’s support of tax-increases as a negative, or Ed Gillespie’s resume as being “establishment” or assigning him “insider” status. Those aren’t personal attacks. But attacking a candidate’s marital fidelity or a father’s loving support of his daughter ought to be off-limits.

What good is it if Jill Vogel or Bryce Reeves wins the Republican Nomination for Lieutenant Governor if the Reeves people can’t support Vogel, and the Vogel people can’t support Reeves, in November? Is winning the nomination even worth it if you destroy your chance at winning in the general? Or do people run for office merely out of vanity, as opposed to running on behalf of strengthening the Republican Party and centuries of Conservative Tradition?

This is an honest question.

Before anyone starts pointing fingers and saying, “So and So started it!”, let me just make it clear that I don’t care. Because it doesn’t change the fundamental calculus in November.

Spending time with Denver Riggleman taught me how campaigns should be run. It taught me that I’ve been doing it wrong. He demonstrated a better way of running for office and representing the Republican Party. I just hope others learn as much from Mr. Riggleman’s campaign as I have. It’s a lesson that just might change all our fortunes come November.