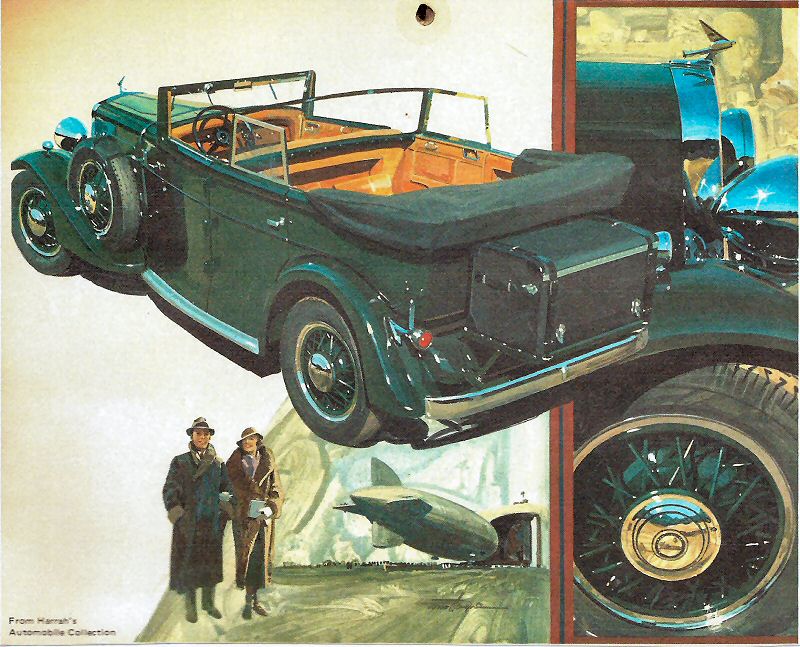 What Happened to Air-travel?

A 1972 calendar that I keep set to the current month hangs in my garage. It’s a “pinup” issue – although not the kind my readers might imagine. Originally issued by Phillips 66 petroleum, it features pictures of beautiful cars from the 1930s – one for each month. Each car is shown against a background of scenes and impressions from that era: a 1932 Lincoln convertible sedan with FDR and his jaunty cigarette-holder in the background; a baseball-player pictured with a 1937 Cord roadster; college-kids skylarking around a 1932 Ford Cabriolet; a 1936 Mercedes-Benz roadster backed by castles and uniformed Germans; etc. I’m reminded of that bygone era of elegance, beauty and looming menace each time I park my own (modern) roadster in the garage.

The November-picture draws me strongly. Its car is a stunning 1933 Franklin Dual-windshield Pirate Phaeton, against the backdrop of a Zeppelin airship, which a man and a woman – both elegantly clad in fur coats – are preparing to board. I have seen photos of how things looked inside those great intercontinental airships, as well as on fixed-wing airliners of the time: happy, well-dressed passengers being served with silverware and white linen tablecloths; roomy seats and smiling hostesses.

Seasoned-citizens, including yours truly, can recall when air-travel was still pretty special. It was expensive, so we didn’t get to do it very often. But when we did, it was memorable. My first airline trip was a 707 flight from Chicago to a job-interview in New York City, when I was college senior. My wife and daughter were with me. On the return-flight the stewardesses – charmed by our year-old redhead – invited us to sit in first class. We’ve never forgotten how privileged we felt on that trip. A month later I flew to Washington, DC, for another job-interview – that time on a twin-prop DC-3 that looked like it had seen service in WWII. It was like going back in time – not quite the same experience as the 707, but still pretty special.

Grandpop used to say, “Ha! Those were the days…” And so they were. Sadly, we seldom fly now – not because we can’t afford it, but because it has become so unpleasant and difficult for people of our age that it’s not enjoyable. We enjoy driving our beautiful, modern car much more, so at least we’re replicating the automotive-aspect of that calendar picture. (It’s not a Pirate Phaeton, but it is a rag-top.)

Last April we all saw video clips – recorded by passengers on a United Airlines flight – of a passenger being forcibly taken off the plane by burly “security” guards. He was literally kicking and screaming as they pulled him from his seat and dragged him to the exit. Horrified passengers are heard exclaiming, “My god! What are you doing?” His wife was also ordered off the plane after his removal.

Spokes-persons for the airline initially explained that the passenger, David Dao – a 69-year-old Vietnamese-American doctor – was “asked” to give up his seat so a UAL employee could get to Louisville, Kentucky, to work on a flight leaving from there. When Dr. Dao refused a “re-accommodation,” which included an offer of $800, officers from Chicago’ Department of Aviation were summoned to remove him from the plane. UAL representatives described the doctor as “belligerent” and “hostile,” by way of justifying his removal by whatever means were required.

I found that last explanation hilarious. My circle of acquaintances includes several Vietnamese men near to Dr. Dao’s age. None would be mistaken for Rambo or Clint Eastwood. All are diminutive in stature, and two are medical doctors. They are unquestionably tough people – having escaped a collapsing country to gain success in a new one – but they don’t look like much of a physical threat.

The obvious fact – which a child could easily see – was that Dr. Dao wanted to reach his destination as planned, and didn’t see why he needed to surrender his seat just because of poor planning by some UAL manager. No doubt he was annoyed by the demand, and probably became verbally hostile. Wouldn’t most of us have reacted similarly? Dr. Dao evidently suffered a concussion and a broken nose in the incident. United clearly didn’t “fly the friendly skies” on that day. (Maybe that’s why I haven’t heard that jingle lately.)

United Airlines changed its narrative on the incident several times. After earlier attempts to spin the situation favorably didn’t calm things down, CEO Oscar Munoz finally apologized to the public and to Dr. Dao, personally. He called the event “horrific,” and vowed that it “will never happen again.” Attorneys representing Dr. Dao said that a lawsuit against the airline and the officers who dragged him from the plane was likely. (Surprise, surprise.) One reporter noted that even a $2,000-offer for the doc’s seat would have been cheap at the price, next to what a lawsuit will cost. A later report indicated that Dr. Dao had settled with UAL for an undisclosed but evidently huge amount (far beyond $2,000).

In December, a UAL first-class customer was rousted from her seat because Congresswoman Sheila Jackson Lee had demanded an upgrade. The incident received wide publicity, with Rep. Lee predictably denouncing the woman whose seat she took as a racist. It was SOP for Ms. Jackson Lee, but United Airlines may never recover.

Few of us (thank the Lord) have ever endured anything like either incident on a flight. But we have all glumly watched what used to be a fun and somewhat elegant experience degenerate into something like the dawn inspection-lineup at Stalag 17: removing shoes; standing on line for long periods to get through security; surrendering a can of deodorant or the forgotten pocketknife in your briefcase; having your carry-on bag searched; narrower seats and less leg-room; no more free meals (except prison-gruel); etc., etc.

What changed air-travel from the pleasure it once was to the hassle it is now? Of course, we all know that airline travel took a serious blow on 9/11/2001, when gangs of terrorists hijacked four airliners – with terrified passengers on board – and crashed them into the World Trade Center towers, the Pentagon, and a field in Pennsylvania. (Analysts believe the Pennsylvania plane was meant to hit either the White House or the Capitol, but was brought down by passengers who fought off the hijackers. There were no survivors.)

Because of those attacks, our newly formed Department of Homeland Security ordered enhanced security procedures at airports to keep would-be hijackers off planes. That seemed like a good move at first, but it’s best to remember that government-involvement in any business usually turns out poorly. (Would the Department of Motor Vehicles or the Post Office be business-models you would follow?)

Accordingly, government’s involvement in airline security has produced long lines, inconvenience, degraded service and disgruntled passengers. Worse yet, security-experiments show that weapons and other dangerous items still slip by security-stations with alarming frequency, despite all that plodding, peering, poking, and prodding. (Some wags have suggested that airport security-checkers might be voyeurs trying to cop a feel.)

Why does this have to be? Was it like this during our 20th-century wars? Having lived through some of them, I can definitely say that it was not. During those times, people still traveled easily within the USA, with minimal inconvenience and disruption. But things are much different now. Security is more complicated because it’s harder to identify our enemies. Back in the day we knew who they were, and we kept them out of the country with stern security measures.

Our last president favored an open-borders policy that let people in who would have been turned away in earlier wartimes. Consequently, we are awash with “refugees” and immigrants – both legal and illegal – from countries that sponsor, or at least favor, terrorism inside the USA. Most are no threat, but people who mean us real harm can easily hide among them and operate freely inside our borders. Often we know nothing about them until they pull off some horrible act.

The presence of so many people from countries sympathetic to terrorism has actually produced a political bloc which invites pandering from one of our political parties, as well as from certain judges who think they should second-guess a president’s attempts to control immigration. The result has been grossly inefficient airport-security procedures.

Instead of profiling and closely examining the small number of people who might pose a risk, all passengers must be treated equally to satisfy the diktats of political correctness. White-haired grandmas get x-rayed and patted down, while young men wearing middle-eastern garb are waved through with scarcely a glance in their direction. (I have personally observed both situations.) Businessmen, housewives, and teeny-boppers are detained and questioned, as lines plod slowly forward. Passengers see all this and wonder how the inmates got control of the asylum.

The bottom line of all this government-involvement is that airlines have devolved from top-notch businesses that put the customer first to quasi-government arms that care little about customers’ comfort. To this former businessman it looks like airlines are no longer being run like true businesses, but seem to have gone to a business-model followed by colleges and government-offices.

A department store reserves the closest parking-spaces for its customers, while its employees must park far from the store. But college-administrators evidently think they’re running more than a mere business, so their employees get the best parking places, while students – their customers – must park in far-off lots.

Obviously airlines now act more like the latter than the former. This explains why an airline would witlessly drag a paying customer from his seat so an employee can “deadhead” to a work-assignment. What serious business would do such a thing? Yes, the airline “owns” all the seats on its airplanes, but customers rent those seats with the expectation that they may sit in them, without disruption, during the flight.

The farther airline-executives and employees stray from the “customer first” business-model, the more customers they will alienate. This will result in reduced revenues, which in turn will produce higher prices and further reduced services. It’s already happening, of course. Passengers must now pay extra fees for luggage and for an on-board sandwich of dubious quality. Airlines count on the fact that some people will always need the speed they offer. But air-travel will never be what it once was unless airlines return to being customer-friendly businesses. I hope it happens in my lifetime, but I’m not optimistic. Until our government gets serious about who is in the country and who our enemies are, the airport “perp-walk” will probably continue. 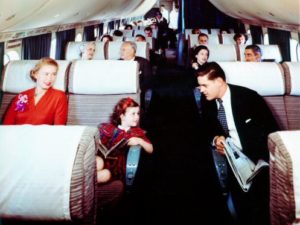 What Happened to Air-travel? was last modified: February 14th, 2018 by Woody Zimmerman
4 comments