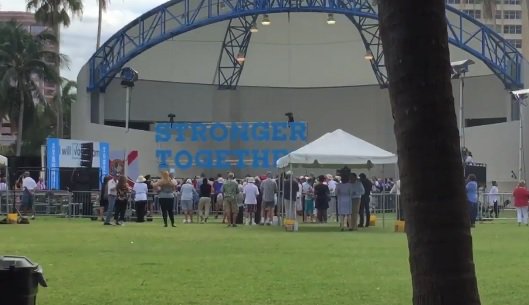 What if Senator Kaine had a Rally and Nobody Came?

On Tuesday Vice Presidential nominee Tim Kaine held a rally in West Palm Beach Florida. The Senator attracted a crowd of 30 people and that included staff and journalists. Â Story hereÂ and here.Â Â Meanwhile Trump rallied 15,000 at an event in Tampa.Â

What if Senator Kaine had a Rally and Nobody Came? was last modified: October 26th, 2016 by Jeanine Martin

Ms. Martin: You need to fix the link on your lead article about the alleged absentee ballot stuffing in Fairfax County . . . your link goes to an empty page.

Meanwhile, NO, Fairfax Democrats are not putting campaign literature into absentee ballots. In the first place, absentee ballots come only from the registrar and contain only the ballot, the return envelope, and official instructions about completing the ballot.

Further, I have friend just checked with local officials in Fairfax,
Va. There were two separate mailings that may have arrived on the same
day but certainly WERE NOT in the same envelope. The local Democratic Party purchased the list of absentee voters, something that every party can do.
The material in the photographs I have seen on other rightwing websites DOES NOT contain an absentee ballot, only Democratic campaign material.

This information is according to a local elected official – a Republican – who
looked into it out of concern – these people on the radio show for
their own purposes are lying to inflame others.

You know what I think Mr. Redneck? I have no proof, but I think that you work for Republicans in some capacity. I think you get compensated somehow to stir up controversy so as to increase interest and rally the troops.

End my speculation. Prove that you are a Democrat and not a Republican con artist. Prove it.

Florida began in-person early voting on Monday. One of the first trends noted was a huge uptick in Latino votes cast via mail-in absentee ballots — analysis indicates an increase of 99 percent over the same point in time in 2012.

The overall absentee tally also represented a net gain for the Democrats, as the GOPâ€™s traditionally sizable edge in vote-by-mail was all but erased this year, leaving Republicans with just a 1.7 percent edge over Democrats in ballots returned. In 2012, by contrast, Republicans had a 5.3 percent lead.

The first day of early voting brought reports of steady and smooth turnout in
South Florida, a key corner of the state for Clinton.

— Hillsborough County (Tampa, 53-46 Obama in 2012) had a 49-34
Democratic edge among day one early voters, well ahead of the
eight-point Democratic edge in registration.

Absentee with no ID….Interesting isn’t it? If you think ppl are going to his rallies and NOT voting…you’d be mistaken.