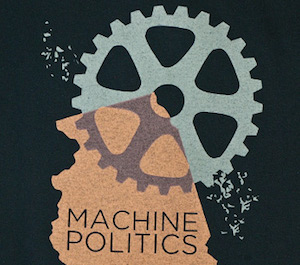 So what exactly is “slating,” you may be asking? And why all the uproar?

Backers of Rep. Eric Cantor’s favored candidates are “slating off” all the people who don’t share their views, and then some.Â  What does that mean?

First, it happens at a local mass meeting of a political party, which is open to the general public so long as they’re registered voters and in accord with the principles of the party. The mass meeting in question is one at which delegates to a convention (usually the statewide or Congressional district convention) are “elected” from that locality. I use quotation marks around “elected” because, until now, just about everyone who signs up is almost always automatically made a delegate (exceptions include, for instance, people who are known Democrats). In fact, most local GOP units have provisions cancelling their mass meeting when fewer people sign up to be delegates than there are delegate slots. It is exceedingly rare for there to be an “over-file” of people wanting to be delegates. More on that in a sec.

The mass meeting is intended to produce a representative “slate” of delegates from each locality. Back in the day, each locality usually only sent a relative handful of delegates to a district or state convention, so these elections were competitive. People campaigned to be a delegate, and the losing folks were “slated off.” Today, though, the Republican Party wants as many people to attend their conventions as possible, so instead of having, for example, one delegate for every 1,000 Republican votes in a county, we now have one delegate seat at the state convention for every 100 Republican votes. That means there are A LOT of delegate seats available, and there is very little chance of having to exclude anyone. For instance, if every available delegate seat had been filled for the 2013 Republican State Convention in Virginia, over 59,000 people would have been delegates.

That’s what makes the current revival of this old fashioned machine-politics tactic so vile.Â  Conventions are designed to be open to those who wish to attend, yet the folks working for Cantor’s YG Virginia are purposefully abusing the system to exclude thousands of people from participating.

Clearly, there are some Republicans who are happy with this, including those Republicans who rely on Democrat participation in their mass meetings to have the votes to beat their fellow Republicans. Most of these folks are still ticked off at the wave of new people who came onto the Republican Party of Virginia’s State Central Committee in 2012, and who promptly then changed the method of nomination for the 2013 Governor’s race (widely understood to be a measure helping Ken Cuccinelli and hurting Bill Bolling). They say, “Turnabout is fair play.”

The problem with that is the people elected in that wave didn’t do it dirty, and didn’t do it by excluding thousands of votes from their fellow Republicans. They did it by turning out REPUBLICANS to vote in Republican contests. I was part of that wave (though I actually won against the so-called “Cuccinelli” slate).

Did that wave cause hard feelings? Clearly it did, and we still haven’t figured a good way to get past it.

Back in December, headlines read, “Cantor urges GOP unity at Republican Advance.” In his luncheon speech at the RPV Advance, he had this to say about last fall’s statewide election losses:

[They] have inflamed a lot of tension and, as a result, weâ€™ve been witnessing a lot of finger-pointing and a lot of blame and feelings of resentment. When our party is not united… we lose at the ballot box.

Sad to say, but excluding thousands of Republicans from our party’s governance processes based on their preference for a district chairman candidate is not exactly a shortcut to unity. Quite the opposite, in fact.

What is Slating? was last modified: December 30th, 2014 by Chad Ochocinco

[…] the tactic of â€œslatingâ€ used by YG and by Cantor’s political lieutenant in the state, Ray Allen, had the effect of […]

[…] the tactic of “slating” used by YG and by Cantor’s political lieutenant in the state, Ray Allen, had the effect of […]

[…] the tactic of â€œslatingâ€ used by YG and by Cantor’s political lieutenant in the state, Ray Allen, had the effect of […]

[…] Party and libertarian activists to take down Linwood Cobb were particularly energized this year, given Allen’s “slating” campaign. As we’ve detailed extensively before, this involved essentially disenfranchising well over a […]

Thank you for the post, but I’m afraid I still don’t totally understand. The history you cite is very informative, but am still not clear on what’s going on now. Are you saying that Cantor wants to go back to the days where the ratio between delegates and R voters was small, like in your example 100 to 1?

Slating is an archaic process – a legacy from the days when it was necessary due to fewer delegate slots than people who wanted to be delegates. It was made obsolete by raising the number of delegates above the number of people who want to be delegates. There is only one reason to “slate” now, and that’s to lock out political opponents from being represented at the convention.

It’s a dirty trick, and bringing in Democrats to execute it makes it one of the slimiest dirty tricks I’ve ever seen inside of the GOP (and I’ve seen some ugly stuff).

The simplest way to understand it is that slating means voting off your opponents from your unit’s delegation to a district or state convention. Example: 1000 people sign up to be delegates to a district or state convention. They have to be “elected” by their unit’s mass meeting. But when the mass meeting happens, a majority in attendance take direction from the consultants to vote to elect only a certain “slate” of 32 those 1000 people to go to the convention, hence disenfranchising 968 people who would otherwise have been able to vote at the convention. Normally this doesn’t happen…all 1000 people are elected automatically.

In short, a facilitator predetermined replication of the Delphi technique.

Reply
Senate Candidates, Other GOP Leaders Speak Out Against Slating - The Bull Elephant March 24, 2014 at 1:36 pm

Republicans like Cantor are destroying the Republican party – if RINOS like him continue to marginalize Conservatives, the GOP will end up like the Whigs of the 1800s.

[…] put forward some solid legislation, but it appears that he is on the wrong side when it comes to slating off conservatives who want to attend the Republican Convention and vote for their preferred nominee. Furthermore, it […]