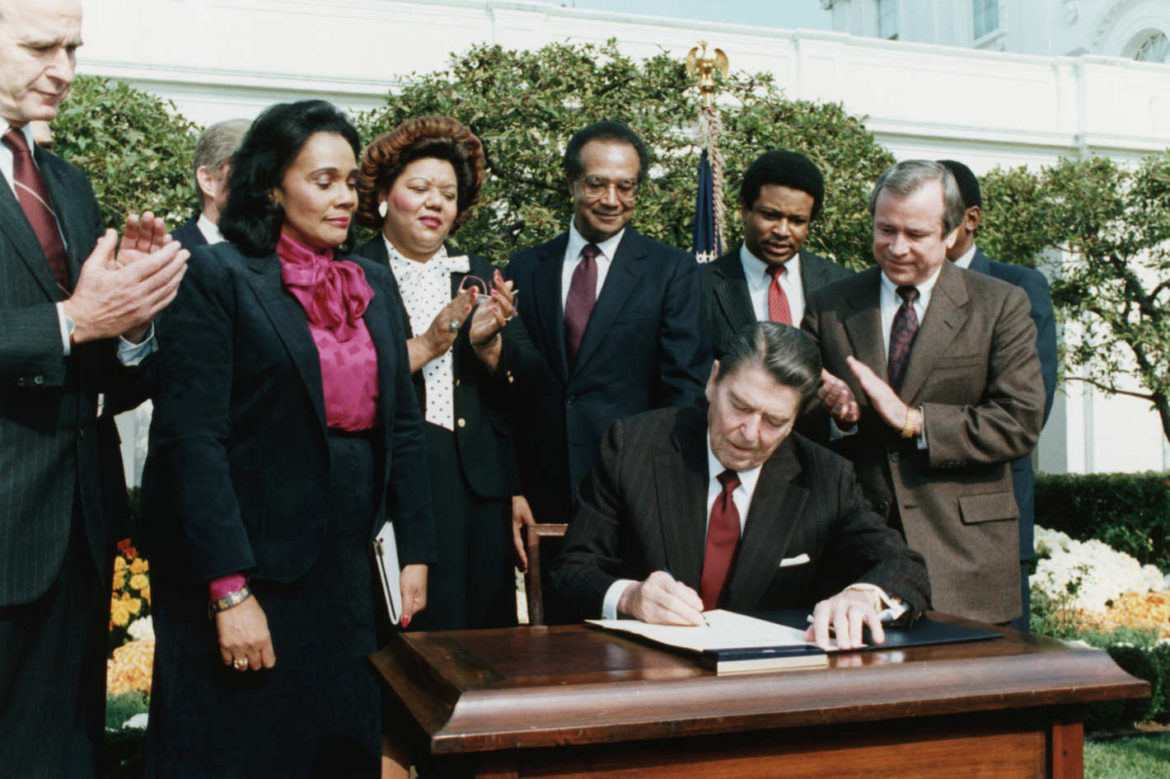 What Martin Luther King means to me

Reflecting on his influence 50 years after his murder in Memphis

I was only a 4th grader at Little Brook Elementary School in Princeton, NJ, when the Rev. Dr. Martin Luther King was assassinated in Memphis on April 4, 1968.

Of course, being a 4th grader, I had no idea who he was.  But our teacher read his “I Have a Dream Speech” to the class verbatim, and over the years, I learned more about him.

Jump ahead to 1986, the first year of the national MLK Day holiday (Jan. 15, his birthdate), I remarked at my office that this was “really just a holiday” for African Americans.  A black fellow worker commented: “Martin Luther King was really about all of us, Ken.”

But as I contemplated that comment, and as we look back 50 years since his murder in Memphis – April 4, 1968 —  it is important to understand that yes, Dr. King was for all of us.

He was not the only civil rights leader.  There were numerous others who worked so hard to achieve integration and rights for African Americans.  My two favorites of late, Ella Baker, who founded the Student Non-violent Coordinating Committee, and Barbara Rose Johns Powell, who in 1951, spearheaded a student strike at Moton High School in Farmville, VA, over poor school conditions, which eventually led to students participating in the Brown vs. Board of Education case and the eventual closing of the public schools by the all-white Board of Supervisors, so they would not be integrated.

But because King was such a powerful and charismatic figure, murdered when he was only 39, he has become the most important of all the civil rights leaders.  There is no memorial to any other on the National Mall.

So what does King mean to us?

Prior to enactment of the federal Civil Rights Act of 1964,  it was perfectly legal (except in states with their own civil rights laws) to not serve blacks, or Jews, or not hire certain people due to race or ethnicity.  So, being Jewish, and hearing about quotas in colleges, “restrictive covenants” on selling homes, and cases of Jews being denied acceptance to certain country clubs, the Civil Rights Act and King mean a lot to me personally.

But it goes beyond that.  King was kind of a whistleblower.  He woke us up to the folly (and dangers) of our prejudices.  American society is less prejudiced, less bigoted, and there is less de facto segregation today than during King’s lifetime.

King blew the whistle on attempts to deny blacks the right to vote (leading to the Voting Rights Act); discrimination in employment and housing, too.

But there was no MLK to blow the whistle in Europe in the 1920s and 30s when junk science and conspiracy theories, mingled together to create fertile ground for Nazism in Germany, which essentially argued that Jews, gypsies, homosexuals, etc. were inferior and had to be eliminated.

There was no MLK to call out the Czarist pogroms or Stalin’s purges;  no MLK to stop the murder of millions at the hands of the Japanese fascists, nor the Maoists in China and Cambodia.  And, even in recent decades, no MLK to blow the whistle on the genocide in Rwanda or the murder of Yazidis in Iraq at the hands of ISIS or thousands more in Nigeria by Boko Haram.

Of course, King’s efforts were possible by being in a nation with a strong Constitution and democracy. He also had a panoply of U.S. Supreme Court decisions behind him.  But Germany in the 1920s was a democracy and so were France and Britain, which stood by as Hitler rose to power, eventually waging a deadly war that cost the lives of 50 million, of which 10 million were murdered in the name of racial purity.

The concept of judging someone by the “content of their character, not the color of their skin” runs deep in democracies worldwide today, but the idea of subjugating or carrying out genocide is based on the OPPOSITE edict.

Due to Dr. King and the civil rights cause, Americans are less fired up if a black or mixed-race family move into the neighborhood, more accepting of racial, ethnic and religious minorities;  more willing to vote for someone regardless of race, and hire them, and “ethnic cleansing” around the globe is becoming rarer and rarer. Our divisions in the U.S. today are largely between Red and Blue, not black and white.  Again, I think we have to thank Dr. King for his part in this.

Had he lived in antiquity, there could have been a “Book of Martin” on him in the Bible;  most certainly a Christian martyr. That’s because King stood for mutual respect for someone else who may be different from you.  In some respect, that’s among the most inalienable of rights.

Although King’s successors in civil rights advocacy are less nonpartisan and squarely in the Leftist/Democrat camp – in this video,  he makes some very favorable comments about Republ-cans — thought he was not in either party;  even though you may get some strange looks marching in an MLK Parade (as I did when I wore my GOP elephant pin at the 50th anniversary of the March on Washington in 2013); even if you wish to avoid discussing race on Facebook, for fear of being shot down as a “racist,”  you should think about what Dr. King means to you and how he significantly helped humanity for the better. That’s one thing I think we all can do as we observe the 50th anniversary of his tragic death.

The author, Ken Reid, wearing his GOP pin at the March on Washington 50th Anniversary on the Mall in DC in  August 2013: 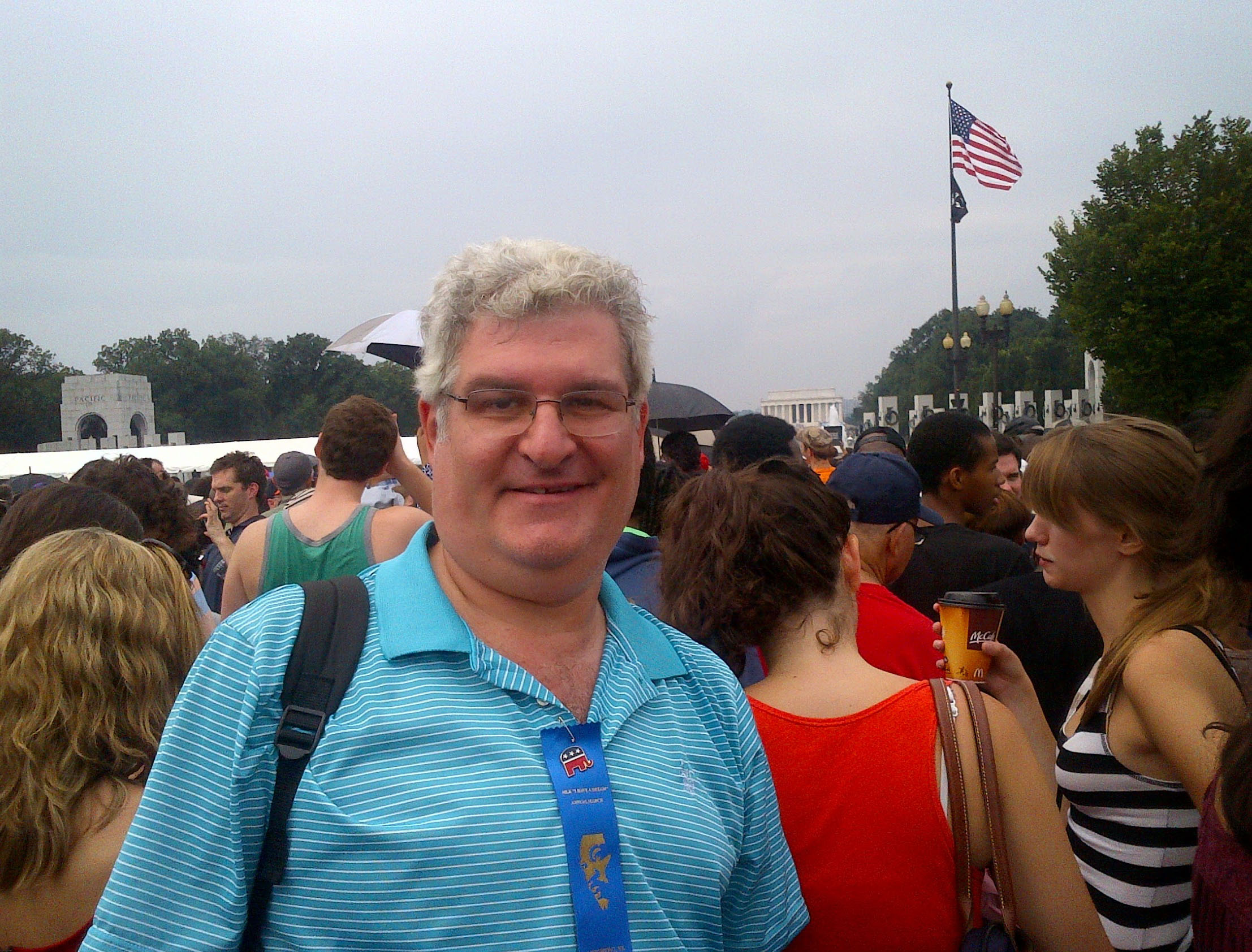 Do you wonder where he might land on the issue of unarmed and innocent African Americans being shot to death by white police officers? Can there be any doubt?

I wonder how many black men were killed by officers under Obamas first 4 years? Do you know? Did it increase in his second 4 years?

He probably would have dropped the “African” and the “white.”

Amen to all that! I get many visitors from out of town and take each one to the MLK memorial. I’m glad that they made convenient parking spaces for it.