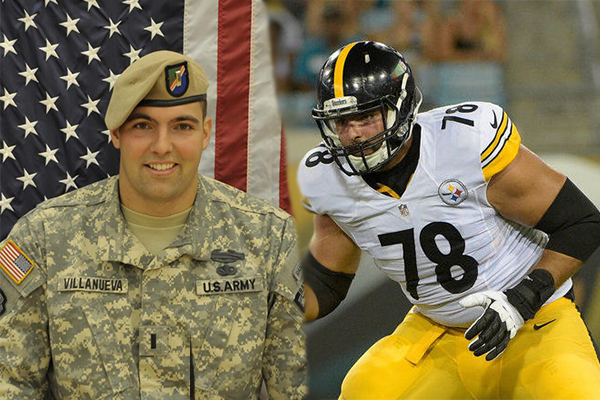 In 1962, my father Farouq Massoud came to this country from Kabul Afghanistan.  He was considered a heretic by his family because he had renounced Islam and was questioning traditional tribal beliefs  about Islam and the ways that his country had done things.  So he left for Washington DC.  He had some money saved up, but spoke no English.  So he went to an English as a 2nd language school, loved the language so much that he married his teacher (my mother).  When he worked as a tire changer in a DC repair shop, the head of ticket distribution for the Washington Redskins was one of his customers.  Dad’s boss told him to take special care of that particular customer, my father did, and the Redskins employee was so impressed he gave Dad a couple free seats to a Redskins game at old Griffith Stadium.  Going to his first Redskins game made my father, who as an Afghan in the US must have felt very different from everyone else, like he was an American.  The NFL has always had a very unifying effect on communities.  As diverse as Washington DC can be, most everyone can unite around the Redskins.  Pittsburgh residents can be Democrats or Republicans, but come game time, they all bleed Steelers colors.  Same for Cowboy’s fans, Eagles, Chiefs, the list goes on and on.

Families bond around football games.  I grew closer to my parents at Redskins games.  In a time where it was typical in Arlington Va to see signs that way HELP WANTED NO FOREIGNERS OR BLACKS NEED APPLY, those times going to the Redskins games, my Dad and I were just fans and we fit in with everyone else.

Fast forward from the mid 60’s to the present time.  We went through the Vietnam War, rioting during the 60’s,  Watergate, the stagflation of the Carter years, two Gulf wars, September 11, and the Great Recession of 2007-2009, and no matter what happened, we as Americans loved our football.  Football was part of the American psyche.  No matter how bad your week had been, you could sit back on Sunday and forget all your problems for 3-4 hours and life would be good again.  However something changed.  Two years ago, a few players bought into the false hype of “Hands Up Don’t Shoot”, of Michael Brown in Ferguson Missouri and turned it into a cause célèbre.  Then a fading player named Colin Kaepernick of the San Francisco 49ers decided to kneel during the National Anthem being played at the beginning of every game to protest inherent police racism.  It is in the official NFL rulebook that each player must stand at attention (Section A pages 62-63) while the Anthem is being played, and that each team must be present when the Anthem is being played.  Yet 49ers President Jed York welcomed Kaepernick protesting the Anthem, and worse, NFL Commissioner Roger Goodell, who had previously never met a suspension he didn’t like, decided to give Kaepernick a pass and not enforce punishment for a flagrant violation of NFL rules.  Even though Goodell had repeatedly punished players when he had no authority to do so.

When we talk about American culture, some of the things we talk about are apple pie, BBQ, our love for our first responders and military, and football.  Commissioner Goodell, Colin Kaepernick, and the foolish owners who have enabled these players to think that it is ever ok to disrespect the National Anthem and our first responders, are in the middle of destroying a significant piece of our American experience.

My family gave up our season tickets last year.  In part over Colin Kaepernick, in part over Goodell’s mismanagement of the league. This current league crisis has been years in the making.  Just no one really saw it coming.  But it was painfully obvious last year when you had all of ESPN praising Kaepernick for disrespecting the National Anthem and the first responders who protect him.

Note that over the past 48 hours, the highest selling player’s jersey is Alejandro Villanueva of the Pittsburgh Steelers, who came out of the tunnel alone to stand for the Star Spangled Banner while the rest of his team disrespected not only their soldiers but also their entire city by sitting out the entire anthem as a team.  Villanueva has also served 3 tours of duty in Afghanistan.

Mr. York, Commissioner Goodell, Mr. Kraft et al.  You are doing significant harm by enabling a bunch of spoiled brat millionaires to disrespect the National Anthem.  Our Republic is not perfect, but no people have ever tried harder than the American public as a whole.   Yes we have been guilty of racism, but we have always tried to atone for our mistakes. No other nation has been as good to its own people as the USA.  And to those of you who say I don’t know what it’s like to lose someone to police brutality,  I personally had a dear friend who was beaten to death by law enforcement.  http://www.americanthinker.com/articles/2016/09/the_life_lessons_of_mike_ercoli.html  I remember taking Mike’s Mom Phyllis to formally identify her son’s body after he had been murdered.  You wanna protest police violence, great. Let’s do it.  I miss Mike to this day.  But Mike’s death never gave me the right to disrespect all cops or our Anthem.  I love our cops.  Many cops are my friends.  Have been for years and always will be.  Think on what you are doing NFL –your fan base is leaving.  The Sunday night game between the Redskins and Raiders was off 11% from this same time last year.  This can only be attributable to disrespecting what makes us a great nation.   Get out of your cocoon.  Put an end to the stupidity, and do what we who pay your high salaries do – stand at attention for the National Anthem.

And to former Army Ranger Villanueva, thank you for trying to keep my father’s homeland free from Islamic terrorism.

What the NFL Players are Really Doing to the American Family and to Our Culture was last modified: September 26th, 2017 by John Massoud
Army Ranger Alejandro VillanuevaColin KaepernickNFL Commissioner Goodell
18 comments