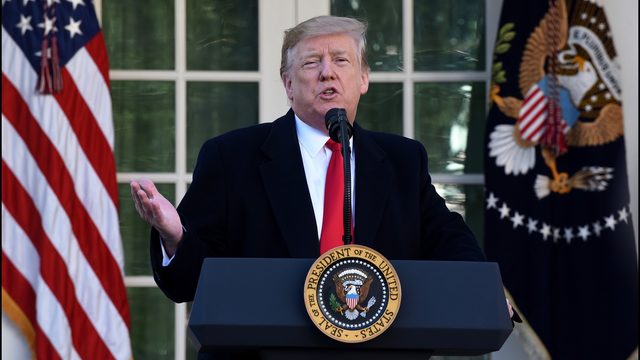 What was THAT all about?

Over a month ago the Speaker of the House, Nancy Pelosi, would not agree to a federal budget that included money for President Trump’s promised border wall between the US border and Mexico.  Trump refused to sign a spending bill that did not include that provision.  That left 800,000 federal employees out of work, furloughed because there was no budget money allocated to pay them.

Yesterday, after a 31-day standoff, the President announced he would sign a budget bill (a continuing resolution) to fund the entire government for 3 weeks, putting all government workers back to work.  At the end of the 3 weeks, if Pelosi still won’t agree to money in the budget for a border wall, the President will either furlough the federal workers again or declare a state of emergency and call in someone (the National Guard?  The Army? Joe the Builder?) to build the wall.

Neither of those things will work.  Pelosi will not agree to money for the border wall because she knows she can win the standoff.  She already has.  The President will not shut down the government because that didn’t work.  Week by week during the furlough his approval numbers went down and he finally caved.  He won’t try that again.  He may declare a national emergency in 3 weeks but if so, why not declare it now?  Why didn’t he declare a National Emergency in December before 800,000 Americans went without a job and without pay for a month?  Perhaps because he knows the courts, probably the 9th circuit, will immediately block his action and it will be tied up in the courts for years.

So what is different now than in December when part of the government shut down?  Nothing.  To quote Bernie Sanders, something I NEVER thought I would do,

“How pathetic. On Dec. 19, the Senate unanimously passed essentially the same legislation that we will vote on today. We are back to exactly where we started. Thank you, Mr. President, for shutting down the government and holding 800,000 federal employees hostage. All for nothing!”

Bernie is right.  We’re back to exactly where we were in December.  Nancy won, Trump lost.  Republicans always cave on budget fights.  Always.  So why did Trump even bother if he was going to fold like a cheap suit? What was that all about?  What exactly was the point if we were to end up back where we started after 800,000 Americans suffered through a month with no income?

Commentator Ann Coulter was a huuuuge supporter of Trump, beginning when he declared he was running for President.  No longer.  Her comment after Trump caved,

Good news for George Herbert Walker Bush: As of today, he is no longer the biggest wimp ever to serve as President of the United States.”

Ouch.  She is far from the only American to feel that way.  The shutdown accomplished nothing other than another ‘win’ for Nancy Pelosi.

What happens now?  My guess is nothing will be worked out between Congress and the President over the next three weeks because Congress has no incentive to give an inch.  The President will declare a national emergency and immediately be slapped down by the courts.  Next year when he runs for a second term he will say he really, really, really wanted that border wall he promised in 2016  but the Democrats blocked him at every turn, proving they care more about getting more Hispanic voters into the US than they care for the safety of our nation.  It will all be true but the bottom line is, the President didn’t keep his promise to build a wall, much less have Mexico pay for it.  How will his base react?  Not well.  Not well at all.

Not only is Nancy Pelosi celebrating this weekend but so is every Democrat who hopes to win their party’s nomination in 2020.

What was THAT all about? was last modified: January 26th, 2019 by Jeanine Martin