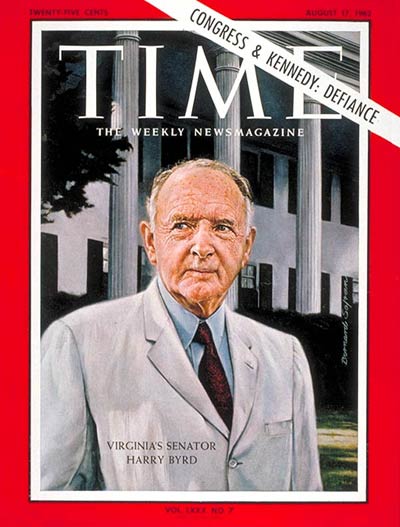 What Would Harry Do?

Harry Byrd was once asked if he planned to vote for the Democrat nominee for President. Byrd as you may remember was a Democrat. Byrd responded not with a yes or no, but simply said, “Sometimes I find silence is golden.”

Byrd didn’t want to support liberals like Harry Truman and Adlai Stevenson, but they were Democrats and Byrd as a Democrat senator could not openly oppose them for election. So despite his objection to their politics he kept his silence which implied he might vote for them. Outright opposition could have caused him trouble with Democrats in Washington and specifically jeopardize his plum committee assignments.

Republican elected officials may be in a similar position this year. Donald Trump’s populist views are an anathema to conservatives. He was for single payer health care, very pro-choice, for a pathway to citizenship, supported the bailout of the auto companies, bailout of the banks, for an Obama like stimulus package… But now he is running for the Republican nomination and he has a new set of positions. He has evolved! He went from being a liberal to now promoting nationalism, but he is on the verge of getting the GOP nomination and only a sudden burst of sanity can derail him.

So what would Harry do? My guess is he would advise conservatives to do two things:

The Trump nationalist/populist phenomenon will end on its own logic. Better grin and wait for it to pass.

What Would Harry Do? was last modified: March 23rd, 2016 by David Shephard
Donald TrumpHarry Byrd
7 comments