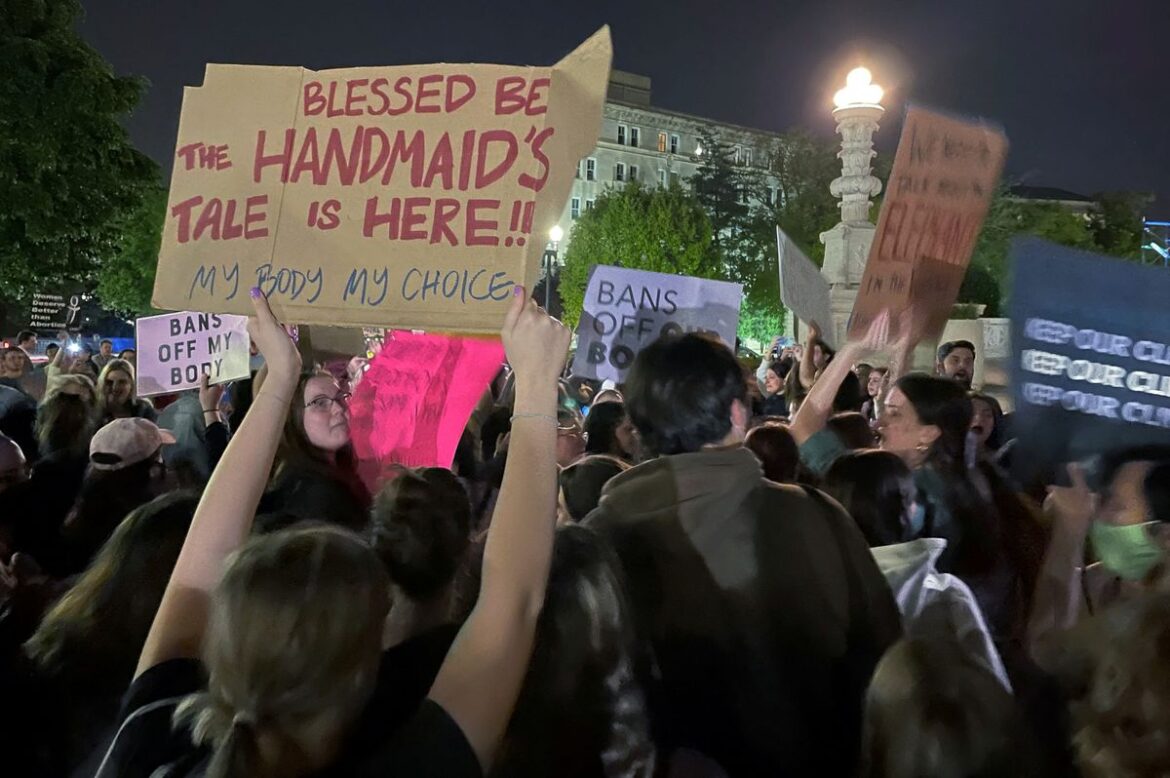 Protests at the Supreme Court began late last night when the draft of the Roe ruling was leaked (source: Reuters.com)

What would immediately happen in each state if Roe v. Wade is overturned

Currently, 13 states have passed “trigger laws” banning abortion that would go into effect immediately if the Supreme Court overturns Roe. Four states, Alabama, Louisiana, Tennessee and West Virginia have amended their constitutions to prohibit any protections for abortion rights.

The map below shows where states will be if Roe is struck down, prior to more states passing new abortion laws. From Axios.com:

More at the Axios link above.

What would immediately happen in each state if Roe v. Wade is overturned was last modified: May 3rd, 2022 by Jeanine Martin

The immediate political action in the blue states is violence. Anyone who is perceived to be pro-life will be attacked, injured and even killed. The need is to be armed and avoid areas of confrontation if possible. If not —- survival will be at stake.

54% of abortions in the U.S are now non-surgical, https://khn.org/morning-breakout/54-of-us-abortions-happen-by-pill-not-surgery/?fbclid=IwAR3snqPaHpWFzqfEnhmdgY947Wo16c8TSmH_0lkZmj69z0ppfyr3glR43mk#:~:text=The%20AP%20and%20the%20New,expensive%20and%20obviously%20less%20invasive This means if the Supremes really struck down Roe v. Wade (I think we should wait for the actual release of the decision vs. becoming histrionic over media leaks), and if states can now regulate surgical abortions, this means it is going to impact fewer and fewer women as time goes on, because the states cannot ban drugs shipped in interstate commerce under the Constitution. I am sure the pharma industry will fight it tooth and nail. Plus, my guess is most states will not restrict access if given the chance since they are “blue”. This nice article Jeanine did states that only 13 states have passed bans/restrictions. So, what it means is the handful of women who really want an abortion just have to get one in another state –which was the situation back before 1973. Now, the histrionic arguments made back then was that poor women couldn’t afford to get to another state and so would do back alley abortions. . But travel interstate is so much more common and easier today. So, in my view,this leak was done by someone close to one of the liberal justices in order to stoke a culture war and create an issue in the upcoming campaign to deflect from the economic and national security issues that are killing the Democrats. It’s a desperation attempt like stoking the fires of racism over police shootings of unarmed black suspects. Very very sad, and hope there is an investigation to find out which justice/staffer did this so they can be removed

This is a comment for the Anti Trumpers who come here. I believe there are a couple… Trump just succeeded (should this ruling be actually finalized) to do what the kitty GOP has promised to do for decades… End Roe v. Wade. Were you really for abortion deep down? Or just not wanting to rock the boat…
I wonder how Bush Boy Roberts, that mincy little kitty is voting here. I guess with the three liberals cause one defected. And who better than Obama isn’t a mandate, its a tax boy…
Now to the battles in the states for the two liberals who come here… You won’t get an abortion in MS or WV… but you can in VA most likely. Its gonna be a real tussle here isn’t it? This is gonna fire up the NOVa base for sure. So much for the purple state. And they will codify abortion.
I guess Brandon and that skanky Pelosi just got a gift too…

The curious point is that Alito drafted the opinion. By Court rules, the Chief Justice picks the author if the Chief is in the majority. If he is in the minority, then the senior justice picks the author. Clarence Thomas is the senior justice. Given Thomas’s views on abortion, I would have thought he would have picked himself to write the opinion. That leads me to believe that Roberts is voting with the majority, and he chose Alito to draft it.

I see David… I am going on the theory that Roberts usually is the defector. You suppose it was Teen Party Boy or the Woman who defected? I guess if you give Roberts a bit of leeway… perhaps he wants to see a decision that was not right from the Constitutional standpoint, that is Roe v Wade to go back to the political arena for people to fight it out there. There is no support for Roe v Wade with the context of the Constitution… If you want abortion as a right…. Amend the CONSTITUTION… it’s right there for you to do. So Powell makes up a right… It was like his Obamacare thing, an abortion of logic… but perhaps he did not want to be the institution that ended it… if you want to get rid of Obamacare… Congress should repel it.
But Robert’s positions on immigration to me are complete horsesh.t.. So I am not a fan. I guess we might see who is the defector, but as you might have seen there was a statement about it not being final….

I assumed Robert would vote with the liberals too, but then when I saw Alito wrote the draft it made me stop and reconsider. Also, I don’t know how long Thomas has been sick. Maybe he punted because he couldn’t physically do it. We will find out in a few months.

My take on Roberts is that he is a Council on Foreign Relations shill and will do their bidding.

Also, we do not actually know that a majority of Supreme Court Justices agree to overturn Roe. All we have is a draft opinion.

Its likely that the leakers feared a majority of Justices would vote to over turn Roe and decided to resort to fear to change their minds.
And/or
It doesn’t matter how they vote. The goal is to is a kickoff of another “summer of rage”. Antifa has already started to act out in the last several weeks. The Democrat Left has every intention of screwing the mid-terms and certainly will activate their black shirt thugs to create the chaos. But this time the theme will be preserving murder as a right. Mobilize pro-aborts to get out and vote democrat in the mid-terms.

The Left is truly evil. Politics is a blood sport and, in this case, its with the blood of innocents.

I think you are correct, but the Dems are da’ Dumbs. The percentage of people that support abortion has dropped dramatically in the past 20 years and another “summer of rage” is going to further doom them in November. Voters are sick of their crap.

Thanks Jeannine. Virginia needs to get this done but it will likely wait for us to get pro-life republicans and democrats in the general assembly. It won’t be next session but could in the 2024 session if we do our job. If it requires a constitutional amendment, then that is a multi-year process.

As this beautiful morning dawns, all is calm here. I expect all hell to break loose from those who want to keep the legal ability to butcher live children in the womb. Heck they have started the drum beat for killing children who have already been born. I’ve heard up to 4 years old. Expect violence all around the country, the targeting of Justices and their families, and strong action from the demons on the Hill.

We are currently becoming awake to the sick, demonic grooming of children for perverse purposes that has infected schools and organizations. But have we forgotten that the actual killing — murder — of children is even worse? The Ten Commandments is clear as day that murder is forbidden.

Lord, please protect the Supreme Court Justices and their staff and all who support this action. Strengthen them all please. And please exposed the leaker.