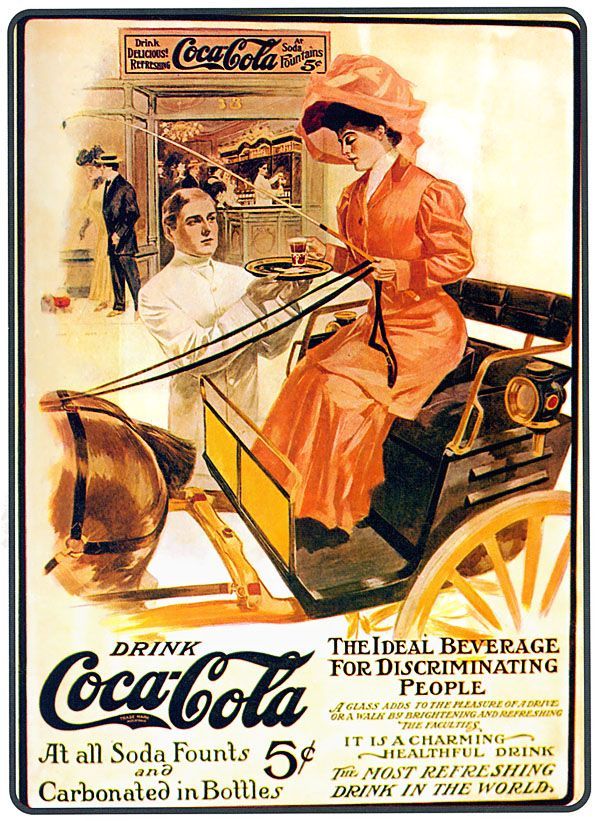 The grim attitudes abroad in the country today seemed to call for an update to an earlier post on this site.

My Grandma often spoke of growing up in the 1890s â€“ commonly called the â€œGay â€˜90s.â€ Although her girlhood was austere and filled with hard work, she still said the era was fun. Of course, â€œfunâ€ in the 1890s relates to a society emerging from prim practices like calling arms and legs â€œlimbs,â€ dressing naked statues, ladies covering their ankles at all times, swimwear that showed very little, and other things that sound silly now. So Grandmaâ€™s â€œfunâ€ could have been an unchaperoned tour of the art museumâ€™s statue section wearing calf-length skirts. It was a different time.

In the Gay â€˜90s, wise-cracking arose as an American social skill. Brand-new Coca Cola â€œpicked you upâ€ with that pinch of cocaine. (The real â€œReal Thing.â€) Ragtime, vaudeville, pre-packaged cigarettes, the â€œfunny papers,â€ and the foxtrot were all the rage. Grandma never touched tobacco, and she called the foxtrot an immoral dance (because the dancers’ bodies touched). But even as a very old lady she liked a catchy tune and still read the comics with her magnifying glass. (I donâ€™t know if she ever sampled â€œoriginalâ€ coke.)

I say all this as background for two observations: (1) that the 1990s, of recent memory, have yet to be officially named (wags have suggested the II Gay â€˜90s); and (2) that humor â€“ along with the foxtrot, â€œoriginal coke,â€ and cigarettes (pre-packaged or not) â€“ has hit a very rough patch in recent years. I think future historians might call ours â€œThe Grim Era,â€ and will argue about exactly when humor died, who killed it, and how the deed was done.

Claiming that humor is dead will surprise many, of course, since more people than ever are doing zanier and zanier things on TV to build an audience. Eventually, as the public’s comedic taste buds become completely numbed (or perverted), a comedian might have to blow himself up on stage to keep his audience’s attention.

That, of course, is â€œentertainmentâ€ and is not what I mean when I speak of humor. Instead, I refer to an optimistic, light-hearted way of looking at everyday life, and a not overly serious regard for ourselves and our â€œleaders.â€ This kind of humor, if not dead, is definitely on life support. To know this, you neednâ€™t look much farther than our workplaces. We spend a lot of time on the job. If you wound humor there, you’ve struck it a serious blow â€“ maybe one it can’t recover from.

One of the worst things to happen to workplace humor in our generation was the wretched union of â€œrightsâ€ and â€œsensitivity,â€ which produced their demented child, litigation. (Is it still OK to say â€œdemented?â€) This unholy family has deformed the modern workplace into a bland, sterile place where managers live in mortal fear that someone from the â€œprotected classesâ€ will call the workplace â€œhostile,â€ sue for big bucks, and ruin the managersâ€™ careers (and maybe the company).

I used to think I knew something about the â€œhostile workplace.â€ At a summer job during college, the regulars threatened retribution if I didn’t stop working so fast. Today, a hostile workplace is where somebody pins up a cartoon or droll clipping which makes a political joke or social point you don’t like. That pinup might â€œprove,â€ in a court of law, that your employer really doesn’t like you, producing a hefty award to soothe your bruised feelings. â€Yumahâ€ (as they say in The Big Apple) has never paid so well as it now does in court.

But humor isn’t dying merely because of frightened bosses, greedy employees and ambitious lawyers. If humor croaks, it will be because ordinary people are waaay too serious about their politics, their jobs, their lives, and themselves. Many of us actually approve of fascist humor-control because: (a) we don’t think things are all that funny; and (b) we donâ€™t want anyone laughing at our stuff.

Basically, nothing can be lampooned anymore, because the joke might offend someone with the leverage to make a Federal case of their hurt feelings. These days, thatâ€™s darned near everyone. (Remember Pollack jokes? Today youâ€™d be fired and maybe arrested for telling one.) Only middle-aged white men can safely be laughed at, now, as a group. And after youâ€™ve squeezed a few laughs out of baldness, pot-bellies, Viagra, and prostates, how funny are these guys, really?

Late in my career I worked on a government contract where one morning a waggish item migrated from someoneâ€™s e-mail to the kitchenette bulletin-board. It was a list of reasons why computers are female. (â€˜Theyâ€™re expensive; they make you wait; they always have a headache at the wrong time;â€™ etc. Made sense, actually.) Nothing lewd or dirty â€“ just silly. I saw women laughing as they read it.

Nevertheless, a huge uproar ensued because a few women complained to the project boss. In an â€œemergency all hands meetingâ€ he roasted us (with a straight face) for the â€œinsensitive slanderâ€ of the posting. (But he didnâ€™t deny that computers were female.) Naturally, the prankster laid low, probably fearing the worst. That manager was never taken seriously after that. (No sensayumah)

On another project, two staff members actually were fired for forwarding an e-mail which contained an ethnic joke. It wasnâ€™t a racial slur, but the e-mail reached a completely humorless person. The address-trace fingered the luckless perps, and they were summarily discharged. Their immediate managers had no warning; they were notified after the fact. Thenceforth, fear and outrage reigned on the project. Staff morale was mortally wounded, with unforeseen results.

In the private sector, re-competing an ongoing contract requires a great deal of unpaid overtime by senior project staff. Only they know enough about the work to write a strong proposal. But those draconian firings so offended senior staff that they lost confidence in the projectâ€™s management. Consequently they made a weak, dispirited proposal effort for the re-compete, and the company failed to win the new contract. The business unit dissolved, and project staff scattered to the four winds. All this wreckage over a joke!

Back in the old neighborhood, when somebody objected to a comment he didn’t like, the routine response was, â€œHey, it’s a free country.â€ Try to remember when you last heard that expression anywhere â€“ especially on the job.

Thus, the modern workplace approaches C. S. Lewis’s description of Hell. Dr. Lewis, one of the twentieth centuryâ€™s greatest Christian apologists, rejected the comic imagery of flames, horned demons, red tights and pitchforks. His metaphor for Hell was â€œâ€¦the bureaucracy of a police state or the offices of a thoroughly nasty business concern â€¦where everyone is perpetually concerned about his own dignity and advancement, where everyone has a grievance, and where everyone lives the deadly serious passions of envy, self-importance, and resentment.â€ (The Screwtape Letters; C. S. Lewis, 1943) If that doesnâ€™t describe modern politics, too, I donâ€™t know what does.

The â€œmark of Hell,â€ said Lewis, is a â€œâ€¦ruthless, sleepless, unsmiling concentration upon selfâ€¦â€ Hellâ€™s utterly humorless denizens lack any â€œâ€¦proportion and ability to see [themselves] from the outside.â€ (Sound familiar?)

This suggests that humor is not just a cultural curiosity, but a spiritual indicator. When an individual laughs easily, sees absurdity in the ordinary stuff of life, and can joke and give his fellows pleasure, it means he is generous, optimistic and hopeful, and cares for others. But when one sees nothing funny â€“ cannot laugh or joke or poke fun at oneself â€“ itâ€™s a warning flag. (â€œBeware a man who never laughs,â€ my pop used to say. â€œThereâ€™s something wrong there.â€)

Lewis did not explicitly say humor was a â€œreligiousâ€ characteristic, but he obviously thought being humorless had a diabolical cast. Iâ€™m sure he would agree that humor comes from inside the person and cannot be pretended. Dr. Lewis thought Hell must be a grim, humorless place because the souls of its demons contained only rage, fear, jealousy, malice, violence, hatred, and all manner of evil. As human beings, we are all sinners, but being possessed by evil is a different matter. (I recommend The Screwtape Letters â€“ whether you believe in Hell or not.)

We started by discussing humor and a lighthearted approach to life, but here we are in deep theological waters. Humor is a positive personal response to life and the world, but a society filled with humorless people is no joke. Whatâ€™s really going on inside the souls of those unsmiling people who see everything in terms of grim self-interest, offense and personal grievance? (And do we really want to know?)

Of course, this doesnâ€™t mean that we should go around perpetually giggling at everything in our lives. Not everything is funny. A death, serious illness, or injury in a family or organization is obviously a serious matter. But even at such times an individual at peace with his God and himself can help others around him by easing their minds.

When President Reagan was shot by a would-be assassin in March 1981, a couple of Secret Service agents saved his life by rushing him to the hospital in record time. It was a very close call, and they must have borne a ton of grief for having failed to protect the president from harm. Yet even when seriously wounded, Mr. Reagan tried to comfort the anxious group around him by wisecracking to an attending nurse: â€œAre you a Republican?â€ He wasnâ€™t being a comedian. He was looking after those who were caring for him by putting their minds at ease with a lighthearted quip.

In societal terms, itâ€™s tempting to say we need to â€œget hold of ourselves;â€ to â€œlighten up;â€ etc. Maybe weâ€™re just in a temporary funk â€“ too easily offended by trivia. Perhaps we can think and act more positively, and regain the capacity to hear fun poked at modern foibles or politics without complaining to the grievance-police.

I hope so, but Iâ€™m doubtful because humor is as much a societal indicator as a personal indicator. As I see it, a humorless society means its people have a spiritual problem. We are wounded in our hearts, not in our funny-bones. Whatâ€™s missing is a connection with God that produces hope, optimism and confidence, and makes us care about others. And, like humor itself, this connection cannot be acted or pretended. Only the real article can make us a joyful, lighthearted people, and keep work, politics, and education from becoming diabolical imitators of Hell.

â€œWe need to get the devil outta here!â€ (Flip Wilson)