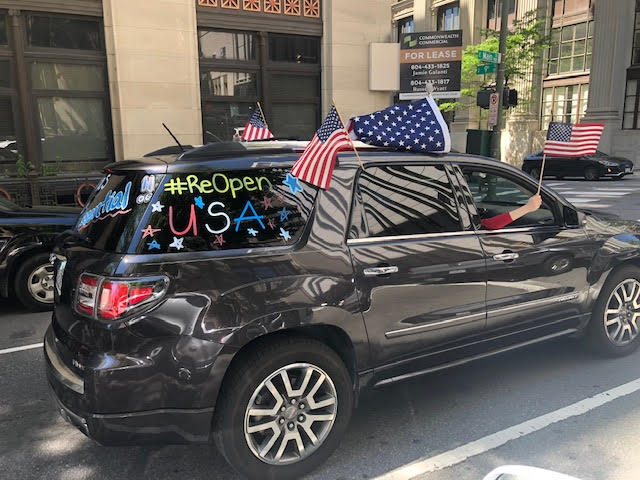 What’s in Your Workout? With photos from Richmond rally

Our First Amendment lives because we defend it, as concerned citizens did on Wednesday in Richmond.  It was the day our General Assembly met to consider the Governor’s amendments to legislation they passed a short time ago.

The House of Delegates met under an apparently enclosed tent on the Capitol lawn, and, in so doing, seemed to violate the Governor’s orders that people not congregate in crowds of more than 10 people, especially in enclosed surroundings.  Maybe the Delegates should “check their privilege.”

The car cavalcade that rolled into Richmond on Wednesday morning was peaceful, yet exuberant.  Participants were intergenerational, respectful, creative with their signage, vocal with their car horns, and happy to join like-minded Patriots in reminding the governing powers that We The People will not long suffer under the heel of tyrants.

Like muscles, the First Amendment must be exercised, lest it atrophy and cease functioning.  To paraphrase the Capital One Bank meme, “What’s in your workout?”

The tent where the General Assembly convened on April 22, 2020:

Some photos from Wednesday’s re-open Virginia rally in Richmond:

What’s in Your Workout? With photos from Richmond rally was last modified: April 23rd, 2020 by Guest Contributor Catharine Trauernicht