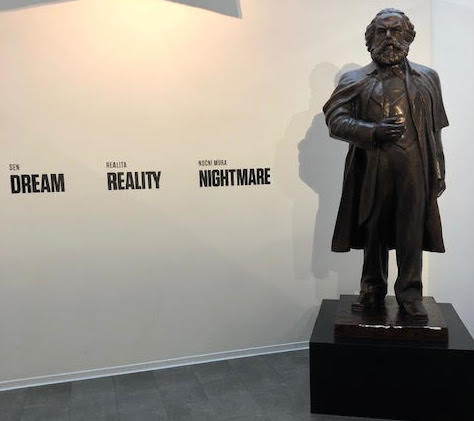 What’s the Czech Republic got to do with our Elections?

Something has been stirring in me since my family and I recently toured the Museum of Communism in Prague, capital city of the Czech Republic.  At the entrance stands a menacing metallic statue of Karl Marx, alongside these words on a nearby wall: Dream – Reality – Nightmare.

Dream, Reality, Nightmare is an apt description of the tempting attractions championed by Socialism and its cousin Communism, and the harsh realities that unfold into nightmares wherever their political systems are implemented.

Are Fairfax County Public Schools teaching about the histories of countries that were invaded by the Soviet Union with utopian promises of equality for all people, which quickly morphed into centrally controlled economies, devastation of resources and industry, propagandized education, ubiquitous police surveillance and spiritually and socially impoverished people?

The Czech people endured Nazi occupation and Soviet domination before emerging into their present-day independent Republic when the veil of oppression was lifted by people yearning to breathe free.  A young tour guide we had one day in Prague personified that breath of Freedom. He understands his country’s history of oppression and treasures the entrepreneurial opportunities his generation now enjoys.

America has been blessedly free from Socialist/Communist oppression.  But without knowledge of history or first-hand experience, are we doomed to bear the yoke of oppression that endures today in other countries dominated by tenets of Socialism and Communism?

When Marxist ideas and propaganda start to permeate the discourse of our local elected officials, it’s time to pay attention, especially with elections just around the corner.  On November 5, Fairfax County voters will have the opportunity to choose both a new Board of Supervisors and a new School Board.

These two current Boards are pushing through a “social and racial equity policy” known as One Fairfax that radiates Marxist propaganda.  By its own admission, One Fairfax would “establish shared definitions” to promote “fairness and justice in the formation of public policy” for ALL Fairfax County residents.  It also recognizes equity as an “economic imperative,” without ever defining a standard for achieving equity.

You have a clear choice on Election Day, Nov. 5.  Get to know your candidates for Fairfax County Board of Supervisors and School Board.  When you hear any candidate promoting One Fairfax, think about all the utopian promises made by Socialist and Communist regimes throughout history.  Think about the dreams they dangled in front of the citizenry. And then think about how those dreams, once turned into reality, became a nightmare for the people.

Our young Czech tour guide would tell you never to fall for the siren song of tyranny.  It is but a small step from believing a utopian-sounding dream to descending into servitude.

What’s the Czech Republic got to do with our Elections? was last modified: October 25th, 2019 by Guest Contributor Catharine Trauernicht