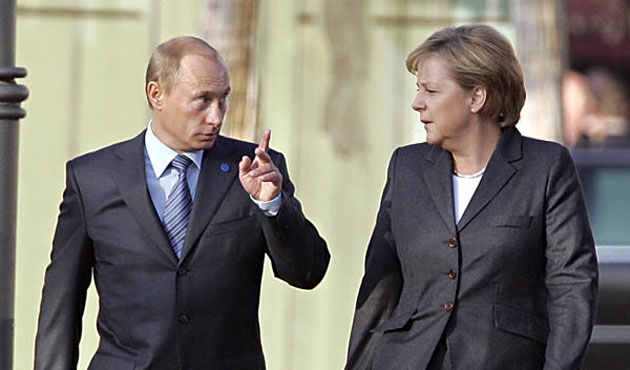 When the Kremlin Understands Capitalism Better than Trump

Oddly, the Kremlin seems to understand what our President does not:

“As for Germany’s dependence (on Russia) as a major gas buyer we cannot agree with this premise,” Peskov told reporters on a conference call.

“Supplies of pipeline gas do not lead to dependence of one country on another but to complete mutual dependence. That is a guarantee of stability and future development.” (Reuters)

The laws of economics affect both capitalist and socialist nations alike. Trade is necessary for nations like Russia and China to prosper and the surest way to ensure that Russia and China remain peaceful and productive members of the international community is to increase trade with them. Besides, when Russia acts badly, sanctions are one of the most effective measures we can take to force them to either back off or back down.

While I’m sure President Trump is merely playing 146D Chess with the rest of the world, it is somewhat annoying to watch him contribute to the American People’s general ignorance of economics.

I am not sure where to start here… Free Trade is good yes. But it only exists in the mind of Academics. In the real world you are “free” trading with a get this Tucker in the case of China:

A COMMUNIST COUNTRY THAT OFTEN SUBSIDIZES ITS INDUSTRIES TO SCREW COMPETITORS!

Hurumph hurumph… free trade… Trump knows nothing about economics… That one is laughable as he has dealt with more economics than Obam or W the Retard in the real world.

And it is very annoying to watch SBT contribute to the ignorance of reality. The facts are as follows:

1) The US has been paying for Germany, France, etc to have generous welfare benefits and socialized medicine for years. This has to stop.
2) Yes trade between rival powers is a good thing, and in theory it prevents wars. However Russia is a notoriously bad actor on the world stage and is taking German money to fund a war against Ukraine, a country which we signed an alliance treaty with over 10 years ago. Best way to stop Russian intrusion into Ukraine is to cut off money to Moscow. Best way to do this is for Germany to stop trading with Moscow. Germany is literally funding Moscow’s war against Kiev and the innocent Ukrainian people.
3) Why should US taxpayers fund Germany’s social welfare program?

SBT – didn’t think it was possible but you reached a new low with this one.

This has absolutely nothing to do with capitalism, it’s about hypocrisy. Honestly, I don’t see a point in even explaining it, if you can’t see it, you’re just blind.

Yea, trade is good, so Trump is a dummy and Putin understands Capitalism better than Trump. That kind of silly argument has used to justify every bad deal of the last 40 years. Sure trade is good, just like food is good. But not all food is good for you.

Germany already imports 94% of their natural gas, and they absolutely need it to get through a hard winter. Concentrating most of that dependence on Russia is not a trivial risk. Russia already cut off the gas to the Ukraine when they wanted to send them a message. You think they wouldn’t do that to get leverage over Germany?

I’m actually not opposed to the pipeline. I just don’t have enough information to form an opinion yet. But Trump’s warnings make a lot more sense to me than this silly “trade is always good” argument.

When Russia turns off the natural gas to Ukraine in the middle of winter when they have no other option for providing basic heat for millions of people, it isn’t for their “mutual benefit.” Rather it is to exercise control and coercion.

Regarding this specific incident, Trump is America’s Salesman and he’s doing one heck of a good job at it.

And that would be an act of war. An act of war NATO will likely sit on its thumbs for.

You think Putin would slap Merkel with a white glove saying “Chu vill do what we say or I will pushes the button??”

The diplomats would start off with “Doing X is not a good idea dontcha think?” And Germany will smile and nod.

Is Capitalism have the Airlines at Roanoke Airport take $700,000.00 in Federal Grants (taxpayer money) to extend flights to Dallas?
Then why did the Republican Majority create this cash cow of income redistribution?

Love how the economics professor ignores those huge trade deficits we have had with our “peaceful” partner in China, which is funding their “peaceful” actions throughout the Pacific. I’m sure Germany will have no regrets relying on their new “peaceful” partner in the future, too. I wonder who will get to control the shutoff valve to that pipeline providing over 50% of Germany’s natural gas needs? Trusting a “peaceful” despot like Putin aught to give the krauts all the reassurance they need.

This author needs to bone up not on Philosophy or economics but rather reality…To compare China which supplies “Wants” to Russia which would supply “Needs” is sophomoric at best, a dance with bias possibly or an outright #NeverTrump attack.
Russia would be supplying life sustaining Needs to Germany with dozens of alternate customers…Potentially leaving Germany stranded were it advantageous to Russia’s interests…China on the other hand cannot find an alternate outlet for it’s goods, (Wants), due to there being no other market that compares to the US consumer….
Sorry bud, your B.S. doesn’t stand reasonable analysis.

But we can’t, his thought tendrils force us to respond!!!

And response is our purpose for being. ???

Oh I don’t know, I try to respond sporadically every once in a while.