Latest Posts
More Evidence Demolishing the Oppression Narrative
BE HEARD Act would harm small business and...
My Choices in the State Party Election
The Coronavirus Placebo
“The Requested Records Do Not Exist.” House Speaker...
About That Shiny New Contact Tracing App…
University removes director for mild criticism of affirmative... 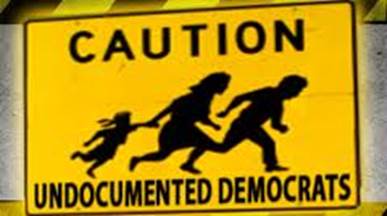 It was a major campaign promise.  Some said it was the heart of his campaign.  Donald Trump promised that if he was elected President, he was going to deal with illegal immigration that was draining our resources and taking our jobs.  He also promised that on his first day in office he was going to immediately rescind all of Barack Obama’s illegal executive orders. That included Obama’s infamous “DACA” order which granted amnesty to the so-called “Dreamers,” illegal immigrants who arrive in the country as children.

Unfortunately, we are over a month into his administration and Trump is still keeping Obama’s illegal amnesty in place.

This specific executive order can be blamed for the rash of young children that has come flooding across the border as unaccompanied minors.

The tens of thousands of illegal aliens streaming across the Rio Grande.  Every last one of them, from the youngest unaccompanied minor to families hoping their young children are tickets to group amnesty, tells every single media outlet which interviews them the same story: everyone back in Guatemala or Honduras knows that if you get a child across the U.S. border, he becomes a sainted “Dreamer” and will be allowed to stay.

Needless to say this has some supporters of the President upset at the situation.  Congressman Mo Brooks (R – AL) was quoted as saying,

“It was front and center in his campaign.  Donald Trump got a lot of votes — probably got the Republican nomination in large part — because he said he was going to be aggressive in defending our borders. One of the low-lying fruits is repealing, by executive order, the amnesty executive orders of Barack Obama, and he hasn’t done it yet.”

Rep. Steve King (R-IA) also expressed his frustration and said comments by both Sean Spicer and Reince Preibus on Trump keeping DACA in place give “real pause to rule-of-law conservatives.”

It is understandable that news of this flip-flop would seem to go somewhat under-reported, given the rash of new executive orders dealing with immigration.  Indeed, from the flurry of activity and the outrage from the left, it would appear as if the Trump Administration is rounding up people off the streets and throwing them across the border from a moving bus.  The truth, however, is much less sensational.  The end result of Trump’s immigration executive orders was this:

“HEAR YE, HEAR YE!! The United States Government will now enforce immigration laws as they were passed by Congress and signed into law by previous Presidents!”

“THE WALLTM”? Start building it as approved by existing law.

ICE 287(g) Coordination?  Back to following the law.

In fact, even the “crackdown” on deportations reported in the news is another example of biased reporting as ICE Officials dispute any surge in activity, re-tweeting reports from under “Amnesty-in-Chief” Obama where larger immigration round-ups took place.

It is quite a sad commentary when a return to normalcy and following the rule of law is met with such outrage and over-reaction.  It just goes to show how far out of whack things got under the Obama administration.

Aside from breaking a major campaign promise, this move is significant for two reasons.  First, as more and more of these children are given legal status, the odds that they will be given green cards and legal permanent resident status grows.  When that happens, these children can then petition the government to provide green cards to their parents, their brothers, and their sisters.  Once they have brought their family over, the parents of these children can then petition for green cards for their own parents, their brothers, and their sisters. Lather, rinse, repeat. This so-called “chain migration” has been the target of legislation in the House in order to end the practice, but the idea that a Senate that is seeking to provide amnesty to millions of illegal immigrants would pass such legislation, or a President that is providing safe haven to the hundreds of thousands of children that have flooded across the border would sign it seems laughable.  Indeed, how can a party that calls itself “family friendly” ever tell a child that to grow up in America, they must abandon their parents and siblings?

The second reason this is significant is that it is another sign that President Trump is open to signing a comprehensive immigration reform bill that will look strikingly similar to the “Gang of 8” amnesty bill, where you beef up border security, deport illegals that have committed a crime, and the rest get to register, pay a fine, and voila!  Green Cards!  During the campaign, Trump made reference to his “big, beautiful wall, with a big beautiful door.”  There was even talk about supporting what is called “touchback amnesty,” where illegal immigrants leave the United States, only to come right back as legal residents.

Right now President Trump is focusing efforts on deporting the 2 to 3 million “criminal” illegal immigrants.  Once that’s done, however, we will still have about 8 to 9 million people in the country illegally we will have to deal with.   Just recently, Senator Joe Manchin (D-WV) claimed Trump made comments that he would be willing to support a Gang of 8 style immigration bill.  The Trump Administration denied that report with some slight of hand, as Sean Spicer said Trump did not support THE ACTUAL Gang of 8 bill from 2013, but did acknowledge that Trump said, “if you guys want to work on something, I’m willing to listen.”

This would not be the first time that a candidate said one thing on the campaign trail but did something else.  It would be a major departure, however, for a man who made stopping illegal immigration and protecting american jobs the number one priority of his campaign, and derided his opponents as soft on the issue.  It would also be a serious blow to the Republican party if 8 to 9 million illegal immigrants got put on the path to citizenship.  The last great amnesty that happened in this country was done under Ronald Reagan in November of 1986.  Over the next decade, millions of new voters would be added to the voting rolls, predominantly in places like California, inner cities, and throughout the west. Coincidentally, the last time a Republican Presidential candidate won California was 1988, and our track record since 1986 in states with major metropolitan centers (New York, St. Louis, Chicago, etc..) isn’t much better.

The total number of illegal immigrants that became legalized by the 1986 amnesty was around 3 million.  That piece of legislation also had calls for more border security, and for illegals to pay a fine and admit their guilt. More importantly, we were told that it would finally solve the problem once and for all.  Now 30 years later we are back in the same position, only this time the number is close to 9 million.  Imagine 9 million newly registered voters over the next decade that will end up voting Democrat.  How many more states will be out of reach of Republican candidates after that?

I understand that most Republicans are still in that post-election glow, and are still basking in Trump’s treatment of the major media outlets, but this is the time to make sure he follows through on his campaign promises.  If we wait until a bill has been drafted and is moving through the Senate it will be too late. Contact the White House.  Tell them you want Trump to follow through on his promise and end DACA.  Then contact your Congressman and Senator. Tell them that you want no amnesty, no legalization, no back door to citizenship.

Ending DACA is a low hanging fruit that would go a long way to reassuring people that he means business.  If he is allowed to ignore this campaign promise, which one is he going to break next?

UPDATE – For all the people telling me to give Trump a break, or assuring me there was some double secret probation plan to end amnesty for the “Dreamers,” Trump made a major announcement today. Just hours before his address to Congress, Trump declared that he is looking for a compromise deal that would grant legal status to non-criminal illegal immigrants to stay in the U.S. AND GIVE CITIZENSHIP TO DREAMERS.

But I am sure this is all just some master plan to fool the Democrats, right guys??