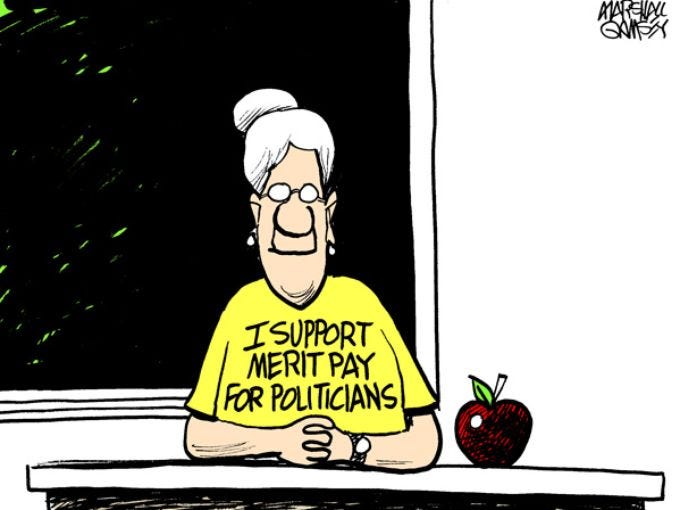 Where Angels Fear to Tread: Merit Pay for Teachers

Presidential candidate Barak Obama didn’t know about (or disregarded) the second of those admonitions early in his campaign, when he addressed 9,000+ teachers at the 2007 Philadelphia convention of the National Education Association – America’s largest teachers’ union. New to these dangerous waters, Mr. Obama drew only stony silence when he said he was “open” to performance-pay for teachers. But he saved the day (and probably his political hide) with a ringing declaration that public education is “under-funded.” Teachers stood and cheered that hoary line (first mentioned in the Dead Sea Scrolls, I believe), as well as Obama’s tag-line of wanting to “fix” the No Child Left Behind Act. (“Fix,” as every dog-owner knows, is another word for emasculate.) NCLB has been massively unpopular with public school teachers since 2001, when George W. Bush signed it into law, because it demands actual progress from poorly performing schools receiving federal monies.

Mr. Obama’s under-funding claim was particularly rich in the localized venue of the District of Columbia’s Public Schools, which had just hired a new chancellor, Michelle Rhee, to “turn things around.” All 30 new DC school bosses in the previous 30 years had been hired for the very same purpose. OK, maybe I exaggerate a little, but not about the “turning things around” part. DC public schools are the poorest performing in the nation, and no superintendent, chancellor, generalissimo or capo di capos hired in the “home rule” era1 has come close to improving things. No mayor has been able to do it, either, and some have gotten the bums rush when they tried.

Obviously, “merit pay” was not operative in DC-schools when Dr. Rhee took over. Had it been, she and her staff would have been paid half of their stated salaries, with large incentive bonuses added for achieving defined goals – i.e., something more tangible than merely “signing” a contract. (Of course, I agree that just showing up to try to run the DC schools – like walking across the Grand Canyon on a tightrope – should be worth big bucks.)

As it turned out, Dr. Rhee tried her best to earn her pay by actually implementing a teacher-evaluation and merit-pay system for DCPS as the centerpiece of her reform-efforts. But she didn’t consult or negotiate with the teachers’ unions in the plan’s formation, so they fought it furiously throughout her tenure. In racially-polarized DC, black teachers tipped the boat over by tagging the plan as “racist” because they saw it adversely affecting them and other minorities. (The term “white privilege” had not yet been coined.)

Dr. Rhee hung on for three years, but finally resigned in 2010. Currently, after a decade of pressure from DC teachers’ unions, the DC Council is considering legislation that gives teachers substantial input in redesigning Dr. Rhee’s unpopular merit-pay plan. Details have not yet emerged, but it’s not hard to imagine what those revisions will look like.

Many businesses pay CEOs and other executives conditionally, on their performance record. Those large compensation packages that pundits and politicians love to denounce are usually bonuses awarded for business-success, not salary. If managers don’t reach certain objectives, they don’t get those big bucks.

Even “stock options” – perhaps the executive compensation least understood by reporters, educators, and civil serpents – are performance-compensation. For instance, a CEO might take the helm when the company’s stock is selling at, say, 100. His compensation package could include a modest salary, plus options on 100,000 shares. After the exercise date – usually set several years in the future – he can buy those option shares at 100, then hold them or sell them at the current price. If that price is now 150, he makes a profit of $5,000,000 by selling. But if the price has dropped below 100 – meaning that he has probably not grown the business – his options are not worth exercising. That part of his compensation package is worth zilch.

For the most part, educators labor under no such compensation discipline – and they have no intention of doing so. For them, failure usually produces more funding, not less. (Is this a great country, or what?) As Barak Obama’s staff undoubtedly taught him after his NEA misstep, the only “merit pay” plan teachers will accept is one that rates nearly every teacher as a superior performer eligible for higher pay. Any plan linking pay to objective measures of student performance is completely unacceptable. The NEA and other unions will never countenance it.

Perhaps Mr. Obama genuinely sought common ground with educators to improve education, but he was naïve about the cooperation of teachers’ unions. On the whole, they are preoccupied with compensation, benefits and job-security for their teachers, and only marginally concerned with the education and performance of students. My authority on this is the late Albert Shanker – a long-time labor activist and president of the United Federation of Teachers – who once brazenly said he would start paying attention to students when they started paying union dues.

An acquaintance once observed: “when somebody says, ‘it’s not the money…’ you can be sure that it is the money.” A true merit-pay system for teachers and administrators would do more for public schools and their pupils than a battalion of megabucks chancellors.

Business’s merit-compensation model is very effective. Its goals are usually financial, and success is unambiguous. Teacher-resistance aside, education’s primary problem with the model is defining reliable goals and incorruptible measures. These do not come readily to hand. Graduation rates and student academic progress (gauged by standardized tests) are two performance-measures required by the NCLB act. But educators have raised a huge stink over them – except in places where progress has been made.

Some states and districts have been found “gaming” their statistics by lowering standards so more students can graduate, or by eliminating some students from the count so their graduation-rates and grade-averages are higher. Administrators also complain that the NCLB mandate was “unfunded” – meaning that extra money was not furnished to meet goals that (in this observer’s view) should have been pursued all along. If you’re not in the education-business to improve students and help them graduate, exactly what is your objective beyond getting paid well?

Educators have acted as though the accountability demanded by NCLB is just a temporary anomaly, and that “normalcy” will be restored if they can just put the right person in the White House – preferably a liberal Democrat who promises to open the Horn of Plenty to public education. But even that desired electoral outcome can produce unanticipated results. The Social Welfare industry thought Bill Clinton would sweep away twelve years of Reaganism and usher in welfare’s golden age when he took office. Instead, he signed landmark welfare reform, designed by a Republican Congress, to get re-elected. And it turned out that Mr. Obama’s two terms produced little of the “normalcy” that educators hoped for. Such things are unpredictable.

What is predictable is that the public will not indefinitely endure an unaccountable, expensive, poorly performing public education system staffed by administrators making more than cabinet officers. Reform is waaay overdue. It’s just a question of when it will come. Hopefully soon.