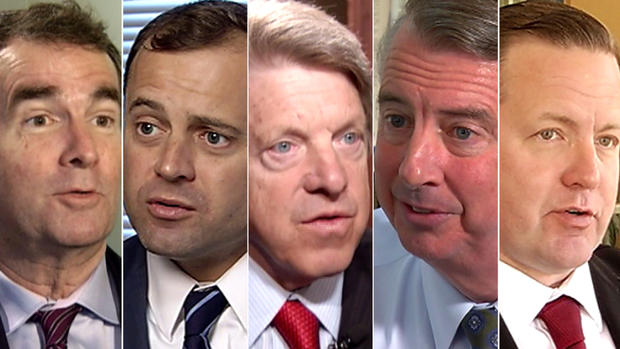 Where the gubernatorial candidates stand on taxes

Corey Stewart intends to eliminate all Virginia income tax, phasing taxes out over several years.  He will eliminate waste, fraud, and abuse in government to be able to afford no income taxes going into the state house. (Or something like that, it’s not entirely clear how his plan will work).  Stewart says “Virginians’ deserve to have the lowest tax bill of any state in the country.”  That’s true, but can it be done and still keep the Commonwealth afloat?

Ed Gillespie has made his tax plan one one of the centerpieces of his campaign.  He would cut tax rates across the board and encourage counties and towns to lower their business tax rates to spur business growth. More on Gillespie’s tax plan here.

Frank Wagner intends to raise taxes, through an increase in gas taxes, to build more roads and eliminate toll roads. (I am one of those rare fans of toll roads because they help to control traffic flow.) Has any Republican candidate ever won any office by advocating tax increases?

Tom Perriello, the candidate endorsed by Bernie Sanders, Elizabeth Warren, and John Podesta will raise taxes on the rich and redistribute the money to those who the Democrats deem to be more deserving. (Gee, where have we heard this before?  Perhaps in any Democrat campaign ever?) Perriello wants universal pre school, which has never been proven to help children, any advantage washes out by third grade.  He also wants paid parental leave and free community college. His ads say will do ‘something’ about helping people college debt. All of it means more taxes to pay for them. Perriello and his opponent both promise to raise the minimum wage to $15 an hour. That will certainly cause many people to lose jobs as businesses across the state are forced to close.

Ralph Northam has been endorsed by Governor McAuliffe, Senator Tim Kaine and many other Democrat leaders in the Commonwealth.  Of course he wants to raise taxes, he’s a Democrat. Northam wants many of the same programs Perriello wants, and he wants the 2.5% sales tax on groceries eliminated for poor.   He also wants a commission to look at the state’s tax code to make it simpler and ‘more progressive’.

Where the gubernatorial candidates stand on taxes was last modified: June 3rd, 2017 by Jeanine Martin

Well Joseph, if you read the papers you could find that college in general is reportedly just a rubber stamp hoop that somebody jumped through while hoping to get a better job. Then when those students graduate with that never die college loan, they find that companies won’t hire them because they don’t have the higher skills that foreign worker imports do. Then you could ask yourself, “Why would colleges support college for free when they already have you paying money for nothing?”

The best bet for the new worker is to sell cheap Chinese junk over their cell phone for a profit, rent your rental
apartment (or Mom’s basement) on AirBNB for cash money, and spend your day Lyft driving and sleeping in your car to experience the everyday life of a third world jitney driver. Then you may discover which is more real in today’s working world. The American Dream. Or a Google Street View existence.

Yeah, in the new economy, you wouldn’t believe the number of middle-aged college-educated people I know who were downsized from their real careers and are now living the 2nd paragraph. A few are even moving back in with Mom and Dad (when still alive) in their 50s. Meanwhile, we continue to import a million new immigrants a year on visa programs who take desirable jobs.

That’s because Americans don’t have the skills for those jobs. They haven’t learned anything for at least forty years.

Well, there does seem to be a big demand for American tattoo artists.

The Democrat Gubernatorial candidates on taxes,specifically payroll taxes look to collect them this is the law. the current executive policy that tells us this is the truth is executive order 24.
now for the Republicans I don’t know nothing about taxes with them they talk to talk but they don’t walk the walk they say we can cut taxes and businesses will employ more employees and we can broaden the base but yet they allow illegal immigrants to come into Virginia and work as unlicensed contractors one illegal employee’s five others. The Commonwealth does not collect their taxes the Commonwealth does not ensure that they have Workers Compensation Insurance the Commonwealth does not ensure that they have contractors licenses business licenses or any of this which would make them operate as legitimate employers and have legitimate employees so to cut taxes right now would be grossly irresponsible when you have a portion of the labor market in the Commonwealth not even in the system.
the last Republican governor allowed illegal aliens to work in Virginia and operate illegal businesses and employee illegally then had the audacity to write a letter to DHS on wanting to check their immigration status and Road checks but yet he could not have VEC commissioner Broadway check their contractor’s license status in audits performed by the Virginia Employment Commission go figure Bob for job or Bob or jobs for illegals I think McDonald like illegal aliens better than the Virginia working man.
so you want to cut taxes this Voodoo will allow businesses to hire more where will you collect the taxes you missed the boat on these people. I think the only Republican honestly that can answer this question is Frank Wagner chairman of the committee of Commerce and labor you will see Bill HB 253 this year will you require that HB 253 have Virginia Employment Commission account requirements tax ID requirements if not you’re just forcing someone to buy insurance how will you make them pay taxes on these employees? attorney general Ken cuccinelli used the hallway width to help close abortion clinics good. Governor McAuliffe in his executive leadership has the Department of Labor and Industry send violations issued to unlicensed contractors to the Department of Professional occupational regulation for investigation by the use of these unlicensed contractors ,come on don’t you want to stop the cheaters? Don’t you want to broaden the base? if our next Governor signs a bill on infrastructure spending just what is the percentage that you guys expect would go to Legal jobs or will these contractors just issue 1099s to illegal aliens and say it’s a federal problem and look the other way?

Why yes Santurary to illegal aliens, child molesters, drug dealers, gang members, and my favorite child support dodgers are allowed to work illegally in Va. with no concern for income redistribution to Va.’s shadow economy.

All valid points. Big reason why I aupport Corey Stewart – he’s tough on illegals. Amnesty Ed has lobbied for pathway to citizenship for illegals. Difference is clear.

Gillespie is to Va. Goverment like Romney is to business.
Wouldn’t Ed just sell the Va.worker down the road.
For Stewart to address waste,fraud and abuse is but responsible “stewardship” , statesman like.
Ed is not right for Va.
Ed at the LU Debate spoke of DPOR Regulation cuts to promote job growth and broaden the base.
Which regulations would he not enforce?
What is the expected job growth from these cuts?
What will be the contribution to Va. in revenue?
Will there be an additional expense to the Commonwealth to subsidize these jobs through Va. Social Services programs?
What will Ed do with EO24?
What will Ed do with the mighty fine McAuliffe policy of DOLI to DPOR notification?
Just how the hell will Ed seek to obtain the underestimated monetary loss discussed in JLARC 427 ?
We must be careful not to nominate someone who leads corporate down .

I also intend to vote for Stewart. No doubt Ed is a “power company technician”. Ed is lying about taxes just like Bob McDonnell did. Ed would certainly raise taxes ASAP.

Say no to the Gillespie tax increases!

Speaking as a community college grad, free cc is a terrible idea. Make it free, it gets taken for granted, and the quality plummets. Part of the reason I enjoyed going to community college was because of the excellent teachers who focused on the students, cc instructors were there because they loved teaching. Make it free, entirely beholden to the government, and you’ll get the “I just want my paycheck and tenure, to heck with my students” crap going on instead of instructors coming because they want to teach.

And the students? Not folks coming because they want to improve there skills or move on to a higher college. No, it’ll become a generic diploma mill scam, a rubber stamp that somebody has jumped through another hoop in the education system.