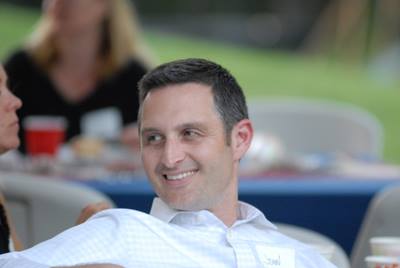 What are Whitbeck and Findlay Up To?

We’ve already covered Chairman John Whitbeck and RPV Executive Director John Findlay’s efforts to defeat Ron Hedlund in the 7th District State Central Committee race and his subsequent statement on the matter. In my mind, Whitbeck’s statement on the matter raises more questions than answers. I want to be clear, these questions have been asked of Chairman Whitbeck by me and others, but they remain publicly unanswered or largely ignored at this point in time.

1 – By opposing Ron Hedlund, who is running on an anti-establishment/Pro-Dave Brat ticket with Dewey McDonnell and Susan Lascolette, are Chairman Whitbeck and RPV Executive Director John Findlay supporting the VCN/Establishment/Anti-Brat ticket of Alec Thomas, Jason Eige, and Marie Quinn?

2 – By paying at least $3,050.00 to cover pre-files for people who will be opposing Ron Hedlund (and in reality, his entire ticket) and thus supporting the ticket of Alec Thomas, Jason Eige, and Marie Quinn, how can Whitbeck and Findlay rationalize that they are not supporting the VCN/Establishment/Anti-Brat ticket? 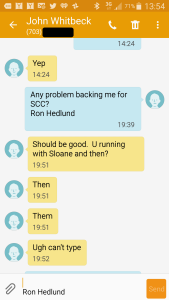 3 – Having previously encouraged the idea of Ron Hedlund running for State Central, why did Chairman Whitbeck change his mind? It has been posited by Hedlund that Whitbeck is simply seeking revenge because of his involvement with Vince Haley’s aborted run again Whitbeck. In his statement, Whitbeck says his opposition has to do with unsupportive statements Hedlund made about Ed Gillespie in 2014.  It is highly unlikely that Whitbeck was not aware of the Gillespie/Hedlund situation when he favored a Hedlund run. Hedlund says that he did work the polls for the entire Republican ticket in 2014, including Ed Gillespie, and there are people who will confirm that. 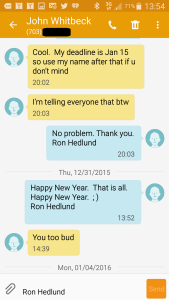 4 – Are Chairman Whitbeck and John Findlay suggesting the idea of a split ticket, if he is not in favor of the full VCN slate? Who are they recommending in place of Hedlund? Alec Thomas, the publicly anti-Brat VCN employee? Jason Eige, the VCN backed McDonnell administration official? Marie Quinn, the only SCC incumbent running (and admittedly, though affiliated with the Establishment and pro-primary, the only member of her ticket that is regarded as being an actual Republican volunteer)?

5 – At the Henrico Mass meeting, I witnessed actions committed and comments made by John Findlay to others that point to the high likelihood that at the very least he, either with or without the Chairman’s knowledge, had been helping establishment candidate Eddie Whitlock against Brat Pack member Jim Herring. Combining that with the voicemail from Whitbeck employee Josiah Alway that we have made public, it is clear that their efforts at the very least overlapped. If the Chair and ED have admitted to interfering with the 7th District why are they denying involvement with the Henrico Chairman’s race? If they find nothing improper with involvement in the SCC races, why don’t they just come out and admit that they opposed Brat Pack member Jim Herring, whom Ron Hedlund was so publicly supporting and helping?

6 – In 2008, a pickup truck was spotted by several people, myself among them, parked at the Republican Party of Virginia Headquarters in Richmond. The pickup looked like it was in mint condition, recently purchased. On the pickup truck was a Barack Obama bumper sticker. When RPV staff was asked who it belonged to, they replied that it belonged to Alec Thomas, RPV Vice-Chair Mike Thomas’ son who was hired to repaint some of the walls at RPV. Apparently after the sticker was pointed out by several people, Alec was asked if that was his truck with the Obama bumper sticker on the back window. He smiled and said yes. He was told to either remove the bumper sticker, or the job would end that day. He left that day. It is fair to say that Alec Thomas supported Barack Obama for President in 2008. Why have Chairman Whitbeck and ED John Findlay, who are aware of Alec Thomas’ VCN employment, support of Barack Obama, and public ridicule of 7th District Congressman Dave Brat, not publicly denounced Alec Thomas the way they have Ron Hedlund?

7 – Are Chairman Whitbeck and John Findlay aligned with the VCN now? Are they trying to create their own support and/or faction, independent of both the VCN and the Conservative Fellowship?

8 – Chairman Whitbeck is a volunteer. He can theoretically spend his time however he’d like. However, as Executive Director, John Findlay is a paid staffer and is not only accountable to the Chairman, but to the entire RPV State Central Committee. How is he completely dedicated to serving the Party in his position if he is working on extracurricular projects, likely during RPV office hours? (“Well I know you sure as hell can’t get anyone on the phone at RPV office vs when Shaun Kenney ran it and anything I needed for our local units efforts were gotten to us quickly. I have also experienced the full voicemail in the empty office during normal business hours, so wonder where he was.” – Korey Snead)

There are reports from all ends of the Commonwealth, that John Findlay has been making phone calls lobbying for the support of candidates for District Chair and SCC in more than just the 7th Congressional District.

These are questions that need to be answered and publicly so. What are Chairman Whitbeck and John Findlay really up to?

What are Whitbeck and Findlay Up To? was last modified: March 28th, 2016 by Aaron Gulbransen

[…] himself, along with Executive Director, John Findlay, were also accused by Haley supporters of improper influence in the 7th District. Those allegations, on closer examination, turned out to be exaggerated and […]

[…] when I wrote the first postings about the 7th District situation, I decided I needed to delve further into the Whitbeck den. He had my full attention. At the time a […]

How many checks did Ron Hedlund write to the Chesterfield County Republican Committee?

If John Whitbeck is trying to be fair in his attacks on Ron Hedlund, why is he not using the same tactic with Alec Thomas? The case against Alec is stronger. Congressman Brat is the Congressman. He’s the Republican nominee. Dave hasn’t badmouthed anyone in these races. If Mr. Whitbeck were to apply the same standard to Alec Thomas why hasn’t he said anything yet? Alec’s actions, statements and employment gives him a problem with his own membership in the Chesterfield Unit committee and bars him from being fit for SCC. Where is Whitbeck?

[…] duty binds us not to jump the ship, while in the pages of The Bull Elephant we are reading of a Stalinesque purging of the ranks by Chairman Whitbeck and staff — and apparently while on RPV time.  Meanwhile, those who prize conscience above […]

*Jasen Eige. And he’s a great guy that would do a great job on SCC.

Extremely disturbing…Alec “baby face” Thomas is not who he pretends to be. His anti-Brat comment on twitter is all I needed. It’s really time for some new faces on State Central. Let’s pull what’s left of this party together to win. Right now, it looks like Virginia will be blue in 2016…great. with all this fighting in Henrico, what have its leaders done to reach out to EASTERN Henrico? Nothing…just like the establishment progressive republicans in Congress, all they care about is themselves and their power. Nothing more, nothing less. You all are a disgrace!

John Findlay is the man. That is all

There is so much more to this than meets the eye. I have personal knowledge of how RPV got out of debt after Whitbeck became chair. It wasn’t Whitbecks doing. It was a deal of endorsement and allowing someone to put their name of Party Plan amendments. Now the Party will suffer and not rebuild because of Whitbecks betrayal to the very person that helped him.

We have a choice, let him win or stand together and fight back! Sign up to participate in the 2nd. district convention to save our Republic. Support Gary Byler.

Very disturbing. I thought that there was a new day dawning for RPV. Heavens knows this is a critical year when we are going to have to work together to try and salvage what we can from the presidential debacle that is developing.