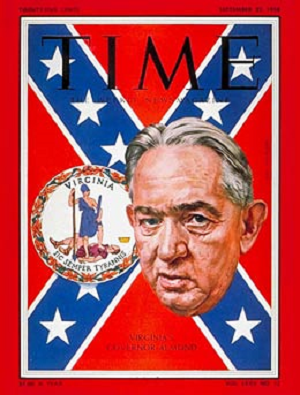 The Washington Post’s editorial of Sunday on “massive resistance” is one of the most intellectually bankrupt, morally repugnant things I’ve read in a long time.[read_more]

Once again, rather than entertain the possibility that opponents hold principled policy differences, the Post’s Editorial Board has decided to take the low road and compare all Republican opposition to Medicaid expansion as just the product of racism. Six years into the Obama era, this trope is wearing a bit thin. But then again, no one ever reads the Washington Post’s Editorial section for new ideas.

Massive resistance was the indefensible policy of racial discrimination put into place by Virginia Democrats in a desperate attempt to preserve Jim Crow. This policy is a stain on our Commonwealth that will never be removed. It should not be invoked lightly. To compare our Party’s elected officials to those who are responsible for massive resistance is beyond the pale.

Since the Washington Post is unable to fathom any rational reason for opposing Medicaid expansion, I will gladly take the time to explain it to them.   To steal a phrase from President Obama, let me be clear: Republicans want quality, affordable health care for all Virginians.

Where we differ from President Obama, Governor McAuliffe, and General Assembly Democrats is the best way to connect Virginians with that health care. Virginia’s Medicaid system is badly broken. Plagued with inefficiency, waste, fraud, and abuse, Medicaid was groaning under its own weight long before Obamacare. The program continues to consume more and more of Virginia’s budget, even with Federal matching funds.

As many who have purchased Obamacare plans have discovered, health insurance does not equal health care. As paperwork grows and reimbursements drop, a number of doctors have declined to accept Medicaid as a form of payment. The Federal government recently cut payments to Medicaid providers yet again.

What happens with that system finally becomes unsustainable? One need look no further than Tennessee’s failed experiment with Medicaid expansion in the late 1990s and early 2000s to find that answer. By the time Democrat Governor Phil Bredesen ended the program, “TennCare” had begun to devour larger and larger chunks of the state budget. Cost control measures were challenged in Federal court, and Tennessee lost, leaving taxpayers on the hook for the ever-growing bill.

In the end, Tennessee finally ran out of other people’s money, and the TennCare experiment came to a painful, abrupt end.

When — not if — the costs of an expanded Medicaid program in Virginia balloon beyond expectation, taxpayers will wind up on the hook. Unlike the Federal government, Virginia can neither run a deficit nor print money, leaving the Commonwealth with unpleasant choices. Raise taxes perpetually to pay for the every-growing program, sacrifice priorities like education and transportation, or pull the health care rug out from under Virginians who have now come to depend on the program.

Republicans want to craft patient centered, free market solutions to meet the needs of our fellow Virginians. What shape those solutions take should be the subject of robust public debate, but they will all have one thing in common — they will not share the top-down, government-mandate heavy approach that is Obamacare.

Patients, rather than bureaucrats, should decide what kind of coverage they want to buy and Republicans are leading the way in finding these types of workable, market-based solutions. The most recent example came from Ed Gillespie, who put forward a thoughtful, workable plan in 2014 and nearly defeated Mark Warner in what almost everyone said was an unwinnable race.

But you’ll never learn any of that reading the pages of the Washington Post Editorial Board. No, in these once well-reasoned pages all opposition to President Obama is born of racism, and any concern about the sustainability of government spending is the fruit of ill will, and nothing more.

Sunday’s editorial is nothing more than a tacit admission that liberals like the Post’s Editorial Board have lost the argument, but lack the good grace to concede.

What? Nothing but a bald faced lie. This is nothing but used car salesman rhetoric. And, not even very good at that level.

You provide no proof to substantiate your claim of the above, Bill numbers? Pending legislation? Republican’s in the U.S. House have passed legislation to repeal ObamaCare about 50 times. However, not once have they passed their own Health Care Plan. NOT ONCE!

Not once have Republican’s passed their own immigration plan in the U.S. House, not once???

In my opinion you need to put your word processor away. I will be surprised if you are able keep your new job for even the rest of the year without being fired?? I suspect it all depends on how good a fund raiser you are, because you sure ain’t getting it done with a word processor!

The Republcan’s have controlled the U.S. House since 2011. They now control the U.S. Senate also.

If as you say the the Republican’s want this affordable health care, why have they not introduced one bill to do just that? When does the talk officially become lies?

I know I have contacted my Congressman’s office many, many, times asking where the Republican “replace” plan is. I am still waiting.

The Republican’s controlled all 3 branches of government in Virginia 2010-14. They now control both the House and Senate. If MediCaid in Virginia contains inefficiency, fraud, waste, abuse, why is the GA not passing legislation to stop these things? No arrests for fraud?

Tell us the details of the Republican’s plan for anything?

PS-Any progress into the investigation of the RPV Howell compaign mailer, and the apparent cheating?

I wonder that frequently, too. Why is nothing being done? Why so much talk and little action?

The only answer I can come up with is fear. Consevatives are terrified of being called cruel by the media. The democrats set the narrative and we’re helpless to challenge it because our leaders are afraid.

Socialism (redistribution of wealth) is literally withering on the vine across Europe and South America, yet Democrats are shoving the U.S. down the same path with the help of a complicit media and unchecked immigration.

Maybe if things go south very quickly and taxation rates skyrocket in Virginia voters will wise up and right this ship while they still remember what a decent economy feels like. I feel like that’s what happened to our neighbors to the north in Maryland. Maybe people are finally starting to wake up?

how many remember Massive Resistance? & the libs will vote with the Dems anyway. while this is insulting, I don’t see it swaying many votes

Seems like pretty standard fare from the Post or Times editorial pages to me. That race card deck is unique in that it is never restricted by card count but by usage frequency. The more you use it for every imaginable topic and response the less effective it becomes as an intimidating device.

There’s an election next year. This will be an issue. We shall see what Virginians really think.

It will be an interesting year.

what OBAMA IS PUSHING IS GARBAGE, but to million, it’s all they have
come up with something else besides complaints.–
if you want to repeal it or replace it–DO IT
–BUT DO SOMETHING WE ALL CAN GET BEHIND.

The only thing you ever bet behind is hating Obama