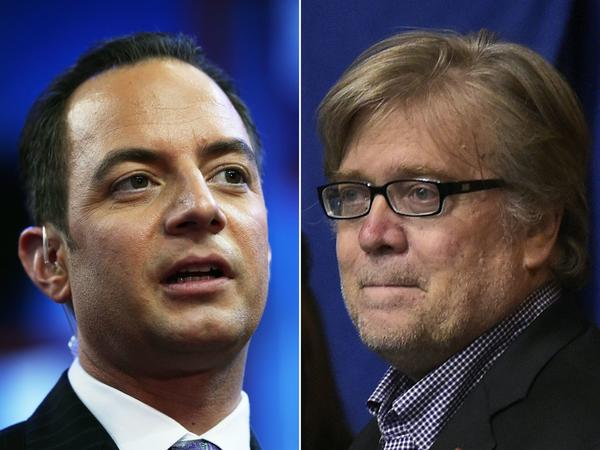 Reince Priebus, currently chairman of the Republican National Committee, will be the Chief of Staff in Trump’s White House. Stephen Bannon of Breitbart News will be chief strategist and senior counselor. The two men will work as partners as they have during the Trump campaign.  Trump said in his announcement:

Steve and Reince are highly qualified leaders who worked well together on our campaign and led us to a historic victory. Now I will have them both with me in the White House as we work to make America great again,”

“Bannon and Priebus will continue the effective leadership team they formed during the campaign, working as equal partners to transform the federal government, making it much more efficient, effective and productive,”

Speaker of the House Paul Ryan and Senate Majority leader Mitch McConnell pushed for Priebus to be Chief of Staff.

Reince Priebus is attempting to sooth various factions of the Republican Party and bring them together for the Trump administration.  Preibus noted that Trump has become more conciliatory. Addressing Trump’s acceptance speech Preibus said,

“Once it was determined he was going to be the winner, he started looking at and thinking about that speech,” Priebus said on Fox News of Trump’s victory speech on Tuesday. “He said, ‘We’re going to calm the waters. We’re going to bring people together. We’re not going to brag.’ ”

“The guy in private is the gracious, personable guy that I’ve gotten to know. … I think that’s part of the reason why he won.

We all hope Trump continues on this path. I believe that he will. The campaign’s over and it’s time for Trump to act like the President he will become in two months.  Quickly appointing members of his cabinet and advisors is a good start.

Read more about the Priebus and Bannon appointments here, here, and here.

“The campaign’s over and it’s time for Trump to act like the President he will become in two months.” Time for the Never Trumpers to get over themselves and the rest of the country to quit their nonsense, much of it is Soros doing, but not all of it. The Snowflakes are an embarrassment to us all.

I’ll never get tired of that.

He actually grew up in the Richmond neighborhood that Kaine currently resides in, but in a much more modest house than our far left-wing senator currently occupies.

Here’s a leftist who gets it. Bad language forthcoming ….

Bannon, formerly of Goldman Sach’s, is now on the Trump transition team. Transitioning OUT of the Trump admin.

Bannon, unlike Priebus, will not have the power to order a cup of coffee in the White House. The establishment’s Priebus got all the power. Limbaugh’s knuckle heads got nothing but air for their vote.

I didn’t vote for Clinton, I didn’t vote for Trump. They’re both serial liars, both trash. Trump is holed up in his tower, (worth more money than Kaine’s entire neighborhood) unable to come out because of fear.

The Democrats have apparently decided to follow the lead of President Kirkland on the TV show “Designated Survivor”, and appoint Muslims to key positions in their “Farty”.

What a mess. Will we end up with more Mexican’s in the USA?

It’s absurd to think that the people that Trump is surrounding his administration with are going to do anything but laugh at the thought of doing what Trump said he would do.

In the end, the only way out for Trump is to say he did what he did not do. Now is the time to hold Trump accountable, not tomorrow, not a year or two from now.

Rule #1 for the establishment is to see how far they can push you.

You’re more polished than most online, and I agree with most of what you say, but folks often pay more attention to how something is said than what is actually said, and they use that to color what you say.

You’re right, I need to work on how I say what I say.

This is what republicans consider “a good start?”

Almost ignored in the news that Republican National Committee head Reince Priebus would be becoming Donald Trump’s chief of staff: That Steve Bannon, the man who proudly
boasted of his Breitbart.com for anti-Semitism, white nationalism, misogyny and conspiracy theories, has been given the post of White House chief strategist.

Among Bannon’s contributions to the media discourse:

— advocating that women who receive online harassment should
“log off”;

— support for public display of the confederate flag;

— multiple stories about “trannies” and “faggots”.

— During divorce proceedings against him, Gannon’s wife testified that he was aggressively anti-Semitic.

Surely you realize that people here don’t read or believe anything you write. Right? You would be so much happier at BlueVirginia.us and we’d be happy having you there.

Btw, it does no good to even respond to old_redneck, I doubt s/he is even reading the responses at this point, s/he’s just spamming the place now. Besides, don’t feed the trolls.

A bad person might spam bluevirginia twice every time old_redneck spams this forum. But we’re not bad people.

Paid digital shill jobs are few and far between, and even fewer of us do it for the sheer joy of the sport.

Challenge just for you old_redneck, how about choosing on your own any Republican who has held high level state wide office in the Commonwealth of Virginia anytime in the last 50 years who you would be okay with. Any. I mean there are hundreds to choose from, just pick one you wouldn’t throw on to a fire.

I know . . . you never heard of him. He is the last of Republicans with moral values and integrity.

“When I became a Republican,” he explains, “our view was that we should
have limited taxation and as small a government as we could have and
still be effective–with the least intrusion in personal lives of people
by government.” But, he adds, “I have always viewed government as an
institution that has a role in our lives. Not everyone is as fortunate
as we are, and it’s a role we in government have to deal with.”

Some people even are possessed of their own minds … Believe It or Not!