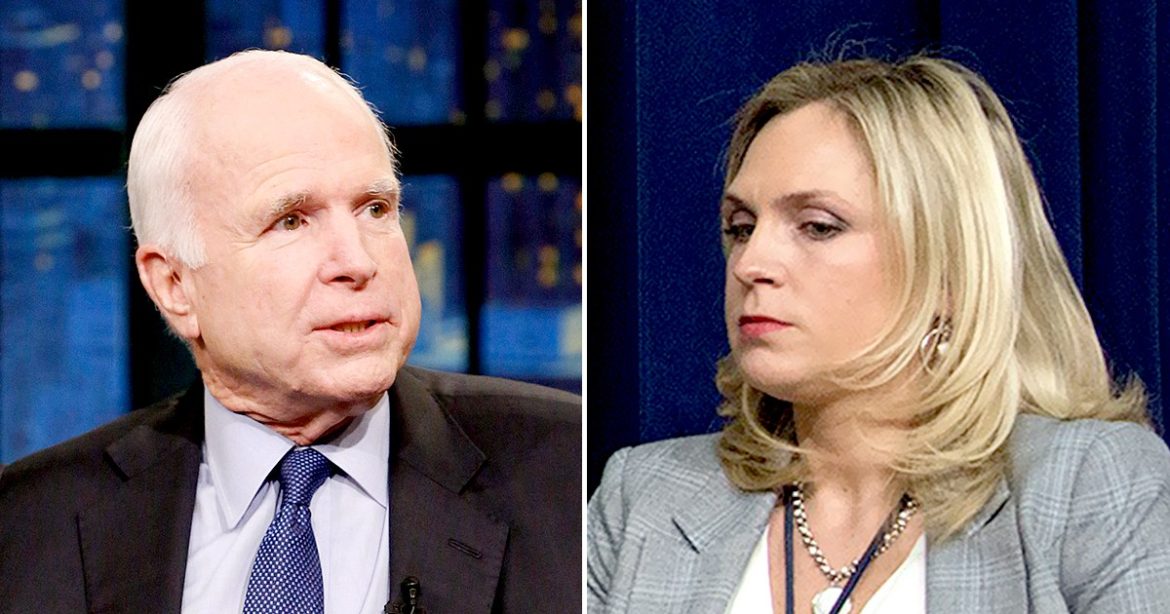 The Mole in the Cesspool

McCain, who is suffering from brain cancer, released a statement from the hospital opposing the nomination of Gina Haspel for the position of Director of the CIA due to her involvement in an agency enhanced interrogation program.

During the White House communications meeting, aimed at planning a reaction strategy, Sadler reportedly joked in an off the cuff manner at the start of the meeting that it, “didn’t matter because he’s dying anyway.”

The comment was leaked from a closed door meeting to the press. As soon as it was published, Sadler promptly called Meghan McCain, the Senator’s daughter, to personally apologize.

Smelling blood in the water, the legacy media capitalized on her inappropriate comment by demanding her dismissal.

But no one bothered to question the source of the leak.

Kelly Sadler handles outreach for the Trump media surrogate team. In my interaction with Sadler, I have always found her to be very professional and highly competent.

In addition, she is extremely loyal to President Trump, and she’s a true believer in his America First agenda.

She has no record or prior history of inflammatory remarks.

Most important, Sadler is incredibly effective at her job. She moves the needle for the President’s agenda. She gets results. Herein lies the problem: the Never-Trumper White House vultures will swoop in and do anything it takes to discredit Trump loyalists–especially those that are effective.

According to Jonathan Easley of the Hill newspaper, who broke the story, the meeting in question was attended by 12 communications staffers.

This was a closed-door staff meeting. Sadler made the ill-advised and insensitive comment at the start. The meeting convened, and no one on the communications team brought it up or commented on it.

Until it came time to take her out.

But as we have seen in this White House there are two teams: Trump’s team (dwindling) and the Never-Trumper Republican paid operative bunch unwittingly brought in by former Chief of Staff Reince Priebus.

This White House cabal loathes Trump and has nothing but disdain and contempt for the President, his family and his America First agenda.

As such, their mission seems bent on purging all Trump loyalists from both the White House and the federal agencies.

Easley, who appeared on my radio show on Friday says he got a phone call from the leaker about five minutes after the meeting concluded, tipping him off to Sadler’s remark.

Five minutes: just about the time it takes to get to a private place and launch a missile to destroy the career of an authentic Trump believer. It’s called the politics of personal destruction and it only flows one way in the West Wing.

So, Sander’s communications team has at least one person out of 11 that doesn’t like Kelly Sadler and ran to the media to deliver what they thought was a kill shot.

She’s a true believer. She’s effective. She’s competent. She’s not one of them.

She’s not part of the D.C. swamp operative network that roams the West Wing feigning support for the President while undermining him with strategically placed leaks at every turn. They leak to destroy.

This isn’t just an isolated case of somebody who has an ax to grind with Sadler. It’s rampant.

If you work in the White House or you are a Trump supporter in the federal government, you are potentially targeted by these career Republican political operatives for purging.

I’ve witnessed enough of these to know the truth.

The Trump campaign brigade who came to Washington to serve this President and his agenda are under siege.

Not by the Democrats, not by the deep state–but by the conspirators trying to take this President down.

So, John, her comment was warranted? It’s amazing how you are defending her and making her the victim. Her comments were reprehensible, I’m not suggesting she be fired, although virtually every other administration D and R would have sent her packing, but wouldn’t an apology be the thing to do?

Yes, if only the unAmerican comment denigrating an American statesman and honorable veteran (who did actually see action) while he lays dieing could have been kept secret. No one would have been the wiser.

None of us will ever get out of this world alive.
The POW has held the American Employee and Employer hostage for way to long.

These are personal interactions, and there have been plenty of negatives in both directions that have no impact on the function of government and are really tabloid stuff. McCain has recently launched a bunch of death bad insults when he should be rising above insult and, if he is a Christian, working on forgiveness.

Wasn’t the Sadler comment done intentionally by the White House to take the heat off the latest Trump lie last week? That lie being the Trump campaign promise in January 2016 that if elected Trump said he would lower prescription Medicare cost for seniors and save the government $300 billion per year by letting the government negotiate directly with drug manufactures.

Last week while the media was focused on the Sadler comment, Trump gives a speech that resulted in the drug companies stocks increasing because Trump is no longer interested in letting the goverment negotiate directly with drug companies as promised during his campaign.

How hard is it to simply govern as an adult and stop with the snarky, disparaging comments?

If it’s going to bother you to be considered a dipshit, don’t be a dipshit.

It is not that hard to govern for *some* Republicans that being Trump.
Employer audits are expected to reach the 5,000 mark.
Now on the other hand why are the Va Republican Legislators dragging their lazy butts?
Why did 5 Va Republicans vote NO on hb1106, didn’t want to be fined $500.00 per employee per day. It going to be costly for those Republicans who don’t want to work and provide sanctuary employment.
The jig is up Liberty is another word for labor exploitatation.

I actually have very few issues w “Trump the American President”. Flip the tables over, right the ship, drain the Swamp, whatever trite phrase you care to use.

But, can you not just shut your piehole and go? What is to be gained by making continuous disparaging remarks about people? It’s not cute, it’s not funny, and it’s damn sure not moving the substantive, what could/should be positive message forward.

Here is a question for the Bull Elephant Never Trumper staff. Do you think you party has anything left once Trump is gone?

I am never voting for another skanky open border, bull crap nation building trillion dollar war making Bush.
Or their equivalent… Rubio, Light in his Loafer Graham, and of course the subject of this article McCain. Add Paul Ryan.

The worst of all of this Never Trumper crap is ;
If they are successful in yhe obstruction of Trump to be reelected and the silent majority goes to the Democrats, the Never Trumpers will swallow that bitter pill knowing that working with or calling out Dems is far more profitable living off of the American people and the Corporatist agenda, the swamp will not only survive but grow.

Leave the Deep State, Swamp Senate at the curb so they may contribute to America not sell it.
It is time for a whole lot of Repatriation in this Country.

We are at a very critical time in the Americanism political Revolution and
NO ONE can be trusted!
Please support Corey Stewart for the
Republican nomination for United States Senate. Stewart will have the Presidents back 100%
America First or get the hell out of the way!

He would be better served by loyal outsider American Citizens.