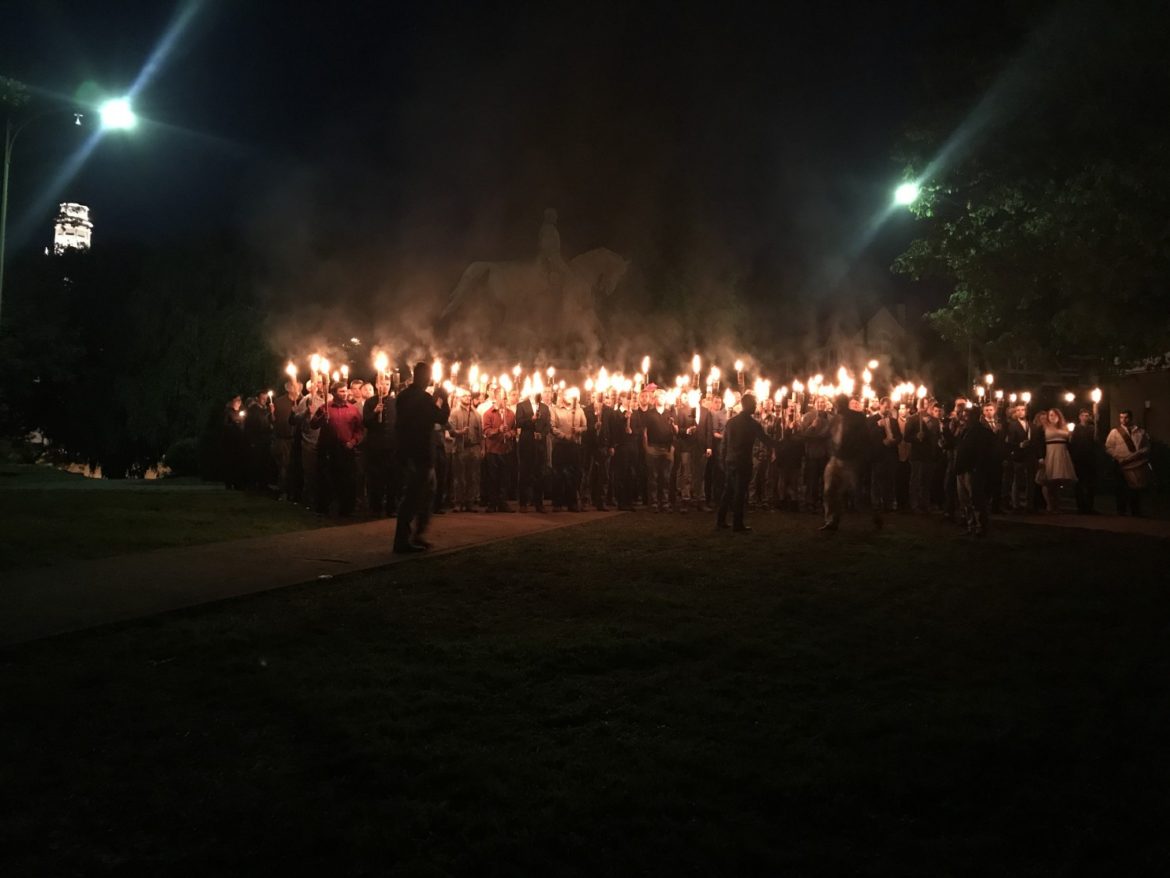 White Nationalism in Charlottesville: What Does it Mean?

Self-proclaimed white nationalist Richard Spencer led a large group of demonstrators carrying torches and chanting “You will not replace us” Saturday in Charlottesville, protesting plans to remove a Confederate monument that has played an outsize role in this year’s race for Virginia governor.

“What brings us together is that we are white, we are a people, we will not be replaced,” Spencer said at an afternoon protest, the first of two rallies he led in the town where he once attended the University of Virginia.

We all use different names to describe these people: “Alt-Right”, populist, white nationalists, race pimps, bigots, racists, white supremacists, etc; but what are they really? The term Alt-Right is troubling, because it associates white nationalism or white populism with “the right”, which would imply that the Alt-Right has something in common with the Conservative Tradition or the Republican Party (not that those two are always in sync). Alternative Right? What is the Alternative to the Right? The Left? The Center? White Nationalism? Populism? And what’s the difference between White Nationalism and White Supremacy?

Once an obscure Internet figure promoting white identity, Spencer coined the term “alt-right” — referring to a small, far-right movement that seeks a whites-only state — and rose to prominence during Donald Trump’s presidential campaign. Although Trump denounced the alt-right, Spencer’s followers counted his victory as a win for the movement as Trump espoused hard-right stances on undocumented immigrants, Muslims and political correctness.

Here’s a problem. Republicans and those who subscribe to hundreds of years of Conservative Tradition believe in law and order. We believe that immigration is good, when it is legal. We believe in equality and liberty for all. We dislike Russians, and Germans, and Saudi’s overstaying their Visas as much as we dislike Guatemalans, Nicaraguans, or Mexicans crossing our Southern Border illegally. We don’t even like it when Canadians cross our Northern Border without proper documentation, eh? The Conservative Tradition rejects religious or theological politics. We do not seek to be ruled by religious laws. We often come into disagreements with folks advocating for fundamentalist government, be it Christian or Muslim fundamentalism.

So yes, there are aspects of the Republican Party that conflicts with illegal immigration and Islamist fundamentalism, but we are not anti-immigrant, anti-Mexican, or anti-Muslim. We seek to live according to the principles of liberty under governments that defend the rights given to us by God. We seek to live under a Republican government and a Federalist system, because Republicanism and Federalism have sustained economic liberty and expanded political liberty. We have traditions and centuries of history that instruct us and upon which we have developed our current political philosophies (under the guidance of the best wisdom of our time and out of respect for what history has taught us).

First of all, to all those white people who have fallen in love with Richard Spencer, you are an embarrassment to your race. He’s a race pimp. We’ve seen other race pimps who’ve tried to use civil rights movements to enrich their own personal bank accounts. I’m thinking of Jesse Jackson and La Raza. Why white people fall for this crap is beyond me, but it’s depressing.

We were all disappointed to hear that the liberal’s in Charlottesville wanted to hide their history by removing their own monuments, monuments reflecting Virginia’s history. It’s absurd how Democrats (a party that was responsible for the civil war, for segregation, for the KKK, and for decades of bigotry aimed at African-Americans) all of the sudden now want to pretend like none of that ever happened. However, this really isn’t up to us. It’s up to the People’s City of Charlottesville. Many of us spoke out against the removal of the statue and we did so with rational arguments. We did not have to bring up the Russians or Blood and Soil, and we didn’t have to talk about “whiteness”. Nothing about this situation has anything to do with whiteness. It has to do with liberalism and a Democrat Party trying to erase the memory of its past.

These White Nationalists are disgusting, awful, pathetic, embarrassing people. Years of watching the liberal media promote race pimps and race-baiters has overwhelmed them with jealousy! They seem to believe that “if anyone is going to make race an issue, it should be white people damnit!”

I believe that these White Nationalists are trying to insert themselves into President Trump’s populist movement – and the only reason they are having any success at all is because populism has no intellectual foundation. Populist movements, whether Trump’s or Bernie Sanders’ or Tom Perriello’s are anti-intellectual and therefore susceptible to all kinds of madness. I’m just waiting for Mr. Perriello to embrace Black Lives Matter or Antifa. He will. Just give him time. So when he lectures the right about the “Alt-Right”, it’s just a little bit funny.

Before the Democrats could open their mouths to try to blame these White Nationalist protests on the Republicans, Republicans across the State had already denounced it in the harshest terms. These people aren’t right wing (unless you consider Adolf Hitler’s National Socialists “right-wing”, as they do in Europe). We typically think of big-government, identity-politics, nationalist politicians as Authoritarians or Left-Wing. So maybe that’s what the Alt-Right is, since the alternative to the Right is the Left. But who the hell knows who these people are? They are people without a political or cultural compass, which is why they are so easily led by despicable characters like Richard Spenser.