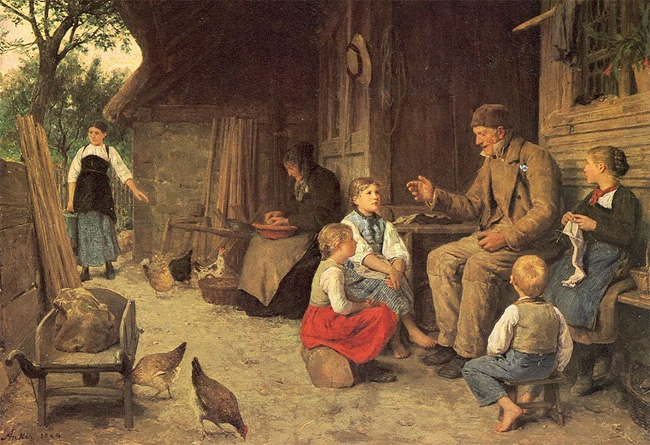 Who Are Our Storytellers Today?

A recent issue of â€œForward Day by Day Daily Devotionals for Disciplesâ€ asked, â€œWho are our storytellers today?â€ The authors pointed out that in Native American communities, they were elders and holy men and women and that as each subsequent generation passed, so did their stories. Those who heard the stories enough learned something from them became the next generation of storytellers.

In this fast-paced world and detached from reality in which we live where many seek instant gratification through social media, I too ask who our storytellers â€“ those that pass on the core values and mores from one generation to the next.

As a child growing up in a small town on the Chesapeake Bay, I was fascinated listening to my grandparents talk of their and their ancestors’ lives as a waterman whose demanding livelihoods hoods were at the mercy of mother nature and an unpredictable economy. Times could be tough but in spite of many obstacles, they prevailed and were not only to raise their respective families but also help those less fortunate.

Looking back, I now realize that they were in fact the storytellers in my life who taught me the value of demanding work, integrity, and empathy for one’s fellow man. I may have dismissed these stories when they were told over sixty years ago but now, I wish I had listened more intently to each and every word.

As a collector of military uniforms, I will often encounter a uniform of a highly decorated military veteran thrown irreverently in a heap. I point out to the family what the individual who wore this uniform went through to earn the decorations such as the Silver Star and Purple Heart. I always encourage the owners to keep it to ensure that the legacy of honor and courage under fire is passed onto future generations. Unfortunately,  most have no interest and would rather have a â€œcouple bucksâ€ in exchange for a precious family heirloom.

Without family storytellers, we have lost our connection with the past and do not have a solid foundation to ground us as we face the trials and tribulations of the future. We desperately need them in our hectic lives in order to maintain our sense of balance, perspective, and wellbeing.

As a fly fisher I am forever haunted by the words of a Norman McCleanâ€™s “A River Runs Through it” â€œNow all those I loved and did not understand when I was young are dead, but I still reach out to them. Eventually, all things merge into one, and a river runs through it. On some of the rocks are timeless raindrops. Under the rocks are the words, and some of the words are theirs.â€ Yes â€œtheir wordsâ€ are the words of my ancestor storytellers who kept the story of life on the Chesapeake Bay alive from one generation to the next.

As Christmas approaches, are you a storyteller to the next generation?

Who Are Our Storytellers Today? was last modified: December 22nd, 2021 by Guest Contributor James Poplar

Stories are usually the only thing that get passed from one generation to another. Yes, heirlooms and property may be transferred, but eventually they get lost or sold as life progresses to different paths. My grandparents told me stories about their childhood and the depression era living. But they also had me memorize family ancestors going back into the early 1700s. Those memories remained stored away for years. When computer genealogy came along, I was amazed at how those few threads would connect with earlier work done by professional researchers to form a bond over centuries, and even millennia in some cases.

Most of the generations today don’t seem to care much about history, or where they came from. Telling your kids the story about how farmers wife Grandma Lucy had 21 kids four generations ago is a pretty impossible way to pass on the family history. That’s why it’s increasingly important to archive those stories, along with a few pictures if possible, and a link to the family tree. So there is a starting point if or when a family future member might be curious years down the road.