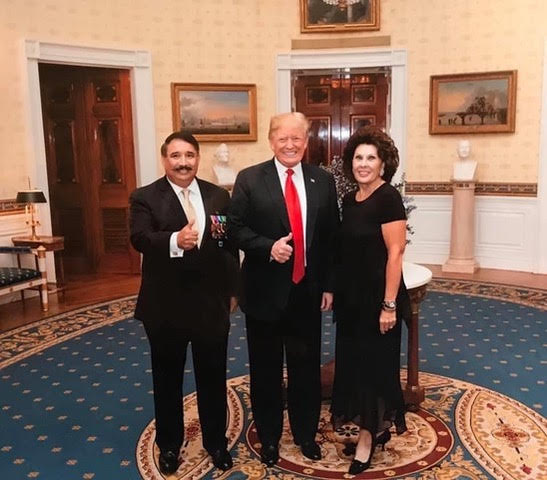 Last Thursday’s candidate forum for Chairman of the Republican Party of Virginia sponsored by the Republican Professional Network was telling.  Kudos to Dr. Michael Cohen of the Cohen Research Group for moderating the event with civility.

For conservatives seeking to return to the gubernatorial glory days of the George Allen administration, strong compassionate leadership will be needed, as well as the sincere desire to serve the RPV.

In full disclosure, while not a registered Republican, I’m a 50-year media/political operative whose family started the largest Hispanic media outlet in the world, UNIVISON.  I’m jaded like many independent voters who remain frustrated with both sides of the political aisle over constant pettifoggery.

But as a Vietnam combat veteran and an independent voting proud American of Hispanic descent 100 percent loyal to the Trump presidency, conservative actions are of concern.

Virginia’s RPV actions were discussed by fellow Hispanic centers of influence before and after the most recent White House Rose Garden ceremony I attended where President Trump announced his Hispanic Prosperity Initiative.

Tragically during the debate, observers waited an hour for the subject of outreach to be posed by Cohen.  When it failed to materialize, Wilson responsibly addressed the badly needed issue head on.

Due to the COVID situation, Wilson has been unfairly hamstrung as chairman, as all Virginia in the ability to hold political gatherings of size, or meet with minorities as he did in February with 50 black leaders in Richmond.

Liberal leadership turns a blind eye when anarchists or protesters gather in mass under free speech protections, but use the COVID concern to deny conservative assemblage.

Plan and simple, Republicans will not win back the statehouse or key congressional and senatorial elections without conservative détente, while bringing independent and minority voters to the table.

First District Congressman Rob Wittman knows that fact, initiating his forward thinking Unity and Diversity Council group formed with key black and Hispanic leaders.   Gauging the needs of the minority community with positive actions and legislation is the answer during these racially turbulent times.  As a member of that group, I can attest to Wittman’s leadership which should be emulated by all candidates and office holders.

Anderson touts his extensive military experience and commitment to hitting the job running if elected.  Certainly Anderson and his wife both have time to donate to the RPV, being turned out of office in an embarrassing defeat last election.  It was the second time for Anderson in his attempt to return to the general assembly.

Will he try a third time regardless of his RPV Chairman attempt now that Hala Ayala, the Democrat who defeated him by 10 points is running for LtGov.?

Distinguished Vietnam veteran Don Scoggins who opposed Anderson’s wife during her first supervisor primary in 2015, suggests both Anderson campaigns have been politically pervasive by overtly courting the military vote and ignoring the extensive minority community and common citizens.  Others agree.

Then there was the report of Anderson as a sitting Delegate, encouraging rank and file Republicans to support his wife’s primary against Scoggins who happened to be black, which to this day has some voters questioning his ethics.

All three running for chairman are honorably discharged veterans and their service above reproach, but as Scoggins infers, it can’t consume one’s candidacy.

Too many former senior officers and NCO types demand deference rather than realize they no longer command, but are commanded once elected.  And for the record, only Wilson after leaving the military or government service, developed a continuing private sector business.

The sometimes flippant presentation of retired veterans who served honorably but have never held a private sector job should be concerning.  Particularly when 99 percent of the voting nation are not military retired or on active duty, but simply deal with day to day employment issues to make payroll.

Shoelwer, a retired Marine veteran and CIA operative, has avoided the hardened military presentation by sporting a striking beard.  During the forum he made several cogent responses to minority outreach and funding questions. But making excuses for conventions that in the past provided stigma for the lack of minority participation was troubling. His overall presentation was nevertheless professional and intellectual.

Anderson presented ambitious opinions regarding funding.   But his primary verses convention views were unclear.  Conservatives should should be concerned his statements are in juxtaposition to actions ultimately supporting divisive swindling conventions.

The question remains with a key election less than 90 days away, is it prudent to change horses in Virginia’s Republican midstream?  And who would be most responsive to the commonwealth’s growing diverse conservative views and the White House mission?

Wilson has the presentation and demonstrated actions of a compassionate leader regardless of these unprecedented times.  Character and financial misrepresentations about the RPV and all three remain rampant.  Politics as usual.  Nevertheless my checkbook would open to Wilson if reelected, but it’s questionable how many grassroots checkbooks would be open to others.

Conservatives would be wise to allow Wilson, greatly respected in White House circles, to continue as chairman and develop needed outreach and funding strategies as well as to promote Virginia redistricting reform.  As the COVID situation dissipates and our economy continues to rebound, under his leadership the RPV can become the force it once was.

Daniel P. Cortez is an award winning Northern Virginia writer, broadcaster and operative. He is also the Chairman of the National Vet Court Alliance.