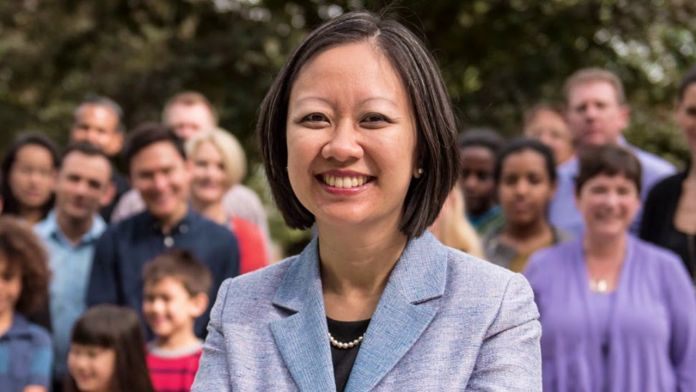 Delegate Kathy Tran, author of the bill to kill babies as they are being born

Who in the General Assembly promotes the murder of babies? Part I

Although a full vote has not come to the floor of the House of Delegates or the state senate, we know who patroned (sponsored) and co-patroned House bill 2491 to kill babies right up until the moment of birth (Gov Ralph Northam carried if further allowing the killing of infants after birth).  We need to know more about these people.

Kathy Tran, chief patron of this bill.  She is a Democrat from the 42nd HOD district, representing Springfield in Fairfax county.  She is in her first term in office.  She should be one and done.

Wendy Gooditis, co-patron, another first-termer.   Two years ago she beat the wonderful Delegate Randy Minchew in the 10th district which covers parts of Loudoun, Clarke, and Frederick counties.  Gooditis knew little about Virginia government but was able to beat the very knowledgeable Delegate Minchew because of the blue wave of anger that turned out to vote against Trump even though he was not on the ballot.  Gooditis has done less than nothing in the House of Delegates and should be relatively easy to beat after her support for this baby killing bill.

Lee Carter, also a co-patron and first-termer, another blue wave wonder.  He represents Manassas City and Prince William County.  Carter makes it no secret that he his an avowed Democrat socialist/communist.  Carter was more than happy to air all of his past indiscretions, whether we wanted to know or not.  Carter’s win took out the wonderful Jackson Miller.  Carter should not be in the House of Delegates. period.

David Reid, yet another first-term wonder in the 32nd district representing eastern Loudoun County.  He is a Democrat who beat Republican Tag Greason.  He too should be one and done.

On the Senate side, the new elected Jennifer Boysko is a patron of this bill.  She represents parts of Loudoun and Prince William counties.  Even the Washington Post supported Boysko’s opponent when she ran for Delegate in the 86th district.  She is an intellectual lightweight but Democrats seem to prefer those kinds of candidates.

Who in the General Assembly promotes the murder of babies? Part I was last modified: January 31st, 2019 by Jeanine Martin