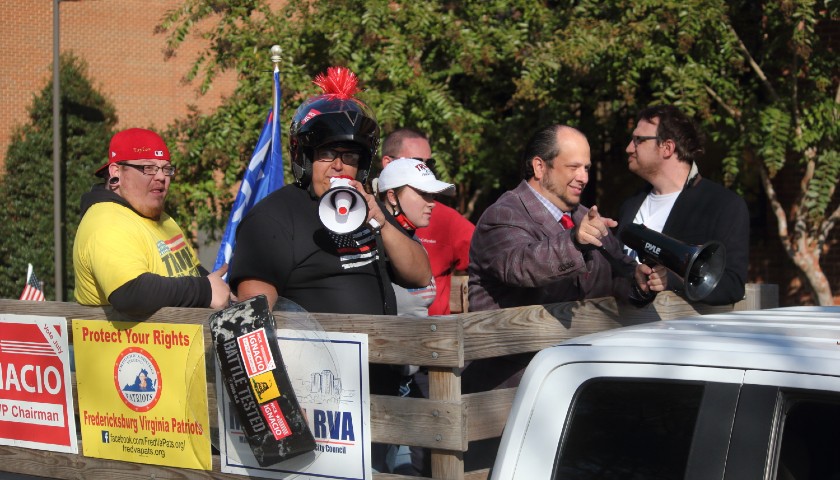 Who Owns the Streets?

A rag-tag assortment of leftists, anarchists and Black Lives Matter protesters have occupied Lee Circle on Richmond’s Monument Avenue for months now. Mayor Levar Stoney has given them de facto control over the small but prominent piece of real estate, and police have refrained from responding to any but the most urgent of calls by neighbors complaining about graffiti, firecrackers and gunshots at night, or people defecating in their yards. Now a new question arises: Who controls Monument Avenue itself?

Michael Dickinson, a candidate for Richmond City Council, put that question to the test yesterday. He organized a “Trump Train,” a caravan of of cars honking horns and waving Trump regalia similar to other pro-Trump manifestations around the country. He promoted the event on social media, and the opposition found out about it. When Dickinson’s Trump Train approached Lee Circle in the late afternoon, Leftists poured into the street, forced the cars to slow to a crawl, and snatched insignia from the cars.

Claims vary crazily about how many cars were in the train — from 15 to 350, according to the Richmond Times-Dispatch. Whatever the precise number, lefties accused the Trumpsters of using pepper spray and trying to run people down. Trumpsters accused Lefties of beating on the cars, throwing a liquor bottle and in one case breaking a window. One gunshot reportedly was fired and an unoccupied vehicle struck by a bullet, but no one was injured.

Individuals from both camps were filming the other with the aim of collecting incriminating footage to score propaganda points against the other.

Clearly, Dickinson relished the confrontation. As he posted on Facebook:

WE WILL NEVER STOP FIGHTING FOR RICHMOND AND AMERICA. We love this great city and country. We will come down Monument Avenue doing whatever we want (legally) any DAMN time we feel like it! BLM AND ANTIFA ARE LOSER CRIMINALS. They don’t run anything. The TAXPAYING WORKING citizens do. I am NOT AFRAID of the blm antifa mob. We are not afraid.

The Trump Train was provocative. It was designed to elicit the response that it did and get Dickinson attention in his bid for Richmond City Council. But that doesn’t make Dickinson wrong. Monument Avenue is a public thoroughfare. No self-appointed group of citizens has the right to block it. The Trump Train’s transit past Lee Circle should have been a non-event. Dickinson was entirely justified in bringing attention to the lawlessness that Mayor Stoney has allowed to prevail.