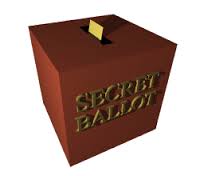 Who Voted for the Secret Ballot at State Central Committee Meeting

UPDATE: Note we don’t know how or whether Chairman Whitbeck or Secretary Diana Banister voted, or whether the final reported totals were precise.  But the above reflects the votes that were captured on an audio recording of the vote.  (A BIG Thank You to reader Aaron Moyer for this!!)

I am so proud of 10th district representatives who all voted to cast their votes in public so we could know how our representatives represent us.  It’s the least they could do. If Congress can stand up and make their votes public why can’t our State Central Committee members?  Why are they hiding behind a secret ballot?