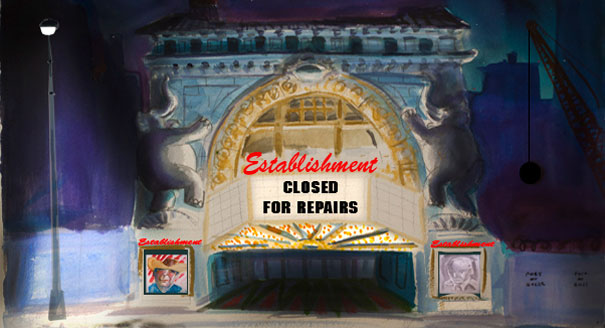 Who Will the Establishment Support Now?

The Establishment lost Bush and now Rubio.  Where will they go now?  Kasich can’t win the nomination but he can play a spoiler.  Will the GOPe try to prop up Kasich even though he can’t win?  We know the Establishment doesn’t like Cruz because they can’t control him and they won’t be able to make deals with him.  Does that mean they will turn to Trump?  Let me know what you think is going to happen now. Who will the Establishment turn to?  Discuss.

Who Will the Establishment Support Now? was last modified: March 15th, 2016 by Jeanine Martin

Neither Trump nor Cruz has a chance against Hillary. This election will be lost to the Democrats. Kasich is the party’s only hope.

The Establishment will turn to Hillary Clinton

The Republican party has a death wish. Trump is the candidate with the cojones and pragmatic viewpoint that can succeed against Clinton. Hillary will twist Cruz in knots as he tries to defend his philosophical proclivities and his govt. shut down votes to general election voters. It is amusing to listen to the Rockefeller Republicans that couldn’t stand conservatives six months ago, now crying the blues because Trump is not conservative enough. It is critical that a Republican be elected now so that the Supreme Court can be saved and the country can get back on an even keel. Trump is not perfect by a long shot, but he is the only one that has a chance in the general election.

That nobody in the establishment faction seems willing to grow a pair and take a firm stand. Schmucks. It should have been done before now. Romney, McConnell, McCain, Ryan et al should go ahead and endorse Trump. Doesn’t seem like anything will turn the tide on Trump, but at least then Trump will be clearly annointed the establishment guy and I can laugh at all the establishment hypocrites in the Trump cult.

Ted Cruz tries to portray himself as a outsider but he too is beholden to his Pacs.Ted Cruz will be the choice for the establishment because he understands the lobbyist games and influence.

Cruz had his ass handed to him tonight and acted like he is the front runner. He is so delusional. I wonder what dirty tactic he has up his sleeves next to use against his remaining opponents?

Cuccnelli is nauseating on Fox everyday promoting Cruz.You can see what good that has done. Cruz lost tonight big time as well as Cucxnelli’s hme state of Va.

Have you followed Cruz’s career and what he’s done in the Senate? There is NOTHING establishment about him.

You sound rather bitter. Perhaps you would be happier across the river in Maryland? Just an idea.

You sound rather bitter. Perhaps you would be happier across the river in Greenland. Just an idea.

Bruce, you really did make me laugh out loud. Hubby too. We needed a laugh today. Thanks!

I live to serve.

No offense intended, but last time I looked, Cruz had not done much in the Senate…except alienate everyone he should be working WITH?

Total of primary legislation bills passed – ONE. TWO of the 68 amendments Cruz has offered were never adopted. Along with Rubio and Graham, Cruz leads the Senate in missed votes, Spoke on the floor of the Senate for 21 hours during the 2013 showdown over ObamaCare that ultimately led to a 17-day government shutdown, a finally passed bill eventually fully funded Planned Parenthood, accomplished NOTHING. I think perhaps she may be the one confused here. His Senate performance is marginal at best even for a rookie freshman. Those are the facts if she cares to accept them.

Jeanine don’t get yourself all twisted up. I am not bitter at all because my candidate of choice Trump has outperformed Cruz. You are the one who must be bitter or irrational that one of your candidates had to drop out.

Standing on the Senate floor for hours talking to the wall doesn’t equate to credible legislation.

Jeanine chill out and have a glass of wine or whine!

My candidate is Cruz. He has not dropped out. You are confused.

The Establishment dislike Trump even more than Cruz; so both of them are out. Oooh, gives me such JOY thinking of their (Establishment) quandary! As we type – they’re futilely dusting off Mittens, or coaxing Ryan, hey, Jeb wasn’t so bad after all!! LOL Serious courting of Kaisch — pst! “Hold off on amnesty talk until AFTER you’re elected!” Meanwhile the GOPe is grilling – for the 3rd time – Trump’s 90-year old nursery school marm trying to dig up ANYTHING on him.

Rack our brains.. Who’s another good ol’ Establishment type who’s not too blemished, and somewhat relevant??

How about Ed Gillespie?? Hmm?? There’s a vacuum now in our political sphere; and nature abhors like a vacuum. Who will the GOPe try to force on us?

Well, the GOPe won’t support anyone in the election of 2 Democrats…Trump v. Clinton