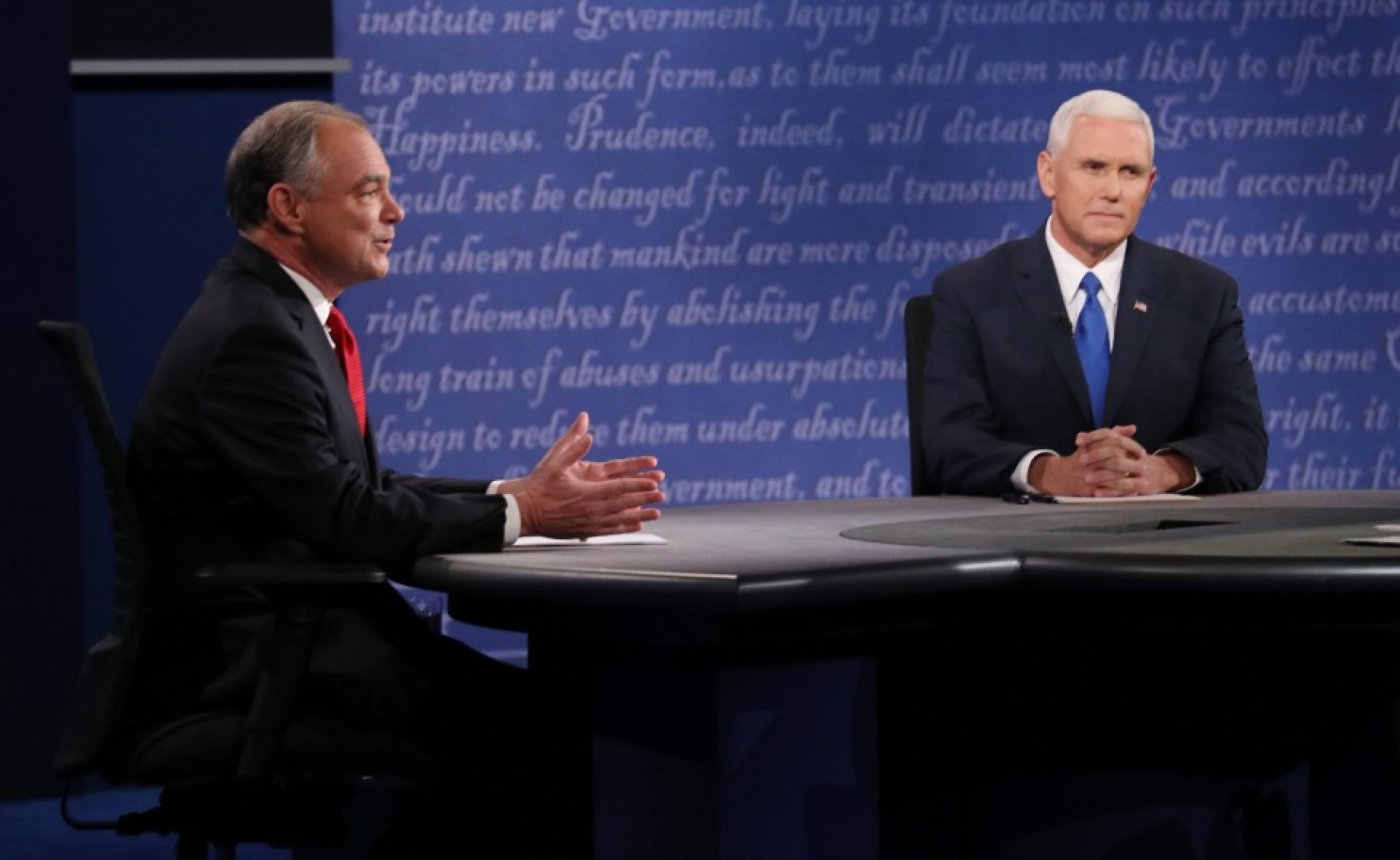 Who Won the Vice Presidential Debate?

Tonight was a rare occurrence when I agreed with Chris Cillizza at the Washington Post when he declared Governor Mike Pence to be the winner of the Vice Presidential debate.  Tim Kaine was horrible, interrupting 39 times!  He was a bully who often looked like he was having a temper tantrum. Was that a strategy?  Governor Pence was clearly the adult in the room.  Chris Cillizza wrote about tonight’s winners and losers. Mike Pence is his winner:

Mike Pence:  From the very beginning, Pence was the more comfortable of the two men on the debate stage. Pence repeatedly turned to the camera when he answered questions, making clear he understood that the real audience wasn’t in the room but watching on TV. The Indiana governor was calm, cool and collected throughout — a stark contrast to the fast-talking (and seemingly nervous) Kaine. Did Pence respond to Kaine’s dozens of attacks on Trump? Only sort of.  What Pence seemed to be doing was making the case for Pence-ism, a, dare I say it, compassionate conservatism — a case for Pence 2020 or 2024. Regardless, Trump will very much take it as Pence’s performance will offer a reset of sorts for a campaign that is scrambling badly due to self-inflicted wounds from the nominee. Win or lose in 24 days, Pence did himself real good in the eyes of the Republican world on Tuesday night.

Cillizza found Kaine and the moderator to be the losers tonight and I completely agree.

Tim Kaine: Someone must have told the Virginia senator he needed to always be on his front foot in the debate, always be the aggressor. It didn’t work. Kaine started the debate talking so quickly and trying to load so many Trump attacks into every answer that it made it virtually impossible to grasp any one attack. In the middle of the debate, Kaine seemed to relax into it — delivering an effective attack on Trump’s comments on women. But, that Kaine was the exception, not the rule. When he wasn’t trying to stuff 10 pounds of attack in a five pound bag in his answers, he was relentlessly interrupting Pence.  Every single time Pence started to level an attack against Clinton, Kaine immediately began to talk over him. I’m not sure if that was on purpose or not but it didn’t come across well — at all. One glaring example: As Pence was recounting his personal experience on Sept. 11, 2001, Kaine interrupted to say “I was in Virginia.” Um, ok. Not a good look.

Elaine Quijano: I root like hell for the moderators in these debates because they have a next-to-impossible job. But, Quijano lost control of the debate within minutes of it starting and never really got it back. She seemed to dole out 20 seconds here and 30 seconds there for Pence or Kaine or both to respond to each other with no rhyme or reason.  She never was able to get Kaine or Pence to, well, stop talking. Then there was the fact that she didn’t seem to follow the flow of the debate; Kaine and Pence would be feuding about, say, tax returns and Quijani, after getting the two men to stop talking, would say something like “Let’s talk about North Korea.”

I also agree with Cillizza when he criticizes the horrible background on these debates. He calls it another loser in the debate:

The debate stage background (again): Look. Am I the only one who finds the Declaration of Independence — in cursive no less! — behind the two candidates’s heads as they debate distracting?  I can’t be the only one.  I take it as my personal mission to rid the debate stage of this blight before the final two debates commence.On social media tonight people asked over and over, “Can we get Pence on the top of the ticket”?  If only we could. Whatever happens we need to keep Governor Pence in around.  He’s got a great future with or without Trump.

Pence was the adult in the room tonight.  Whatever happens I hope he remains in politics.  He’s got a great future in the Republican party.