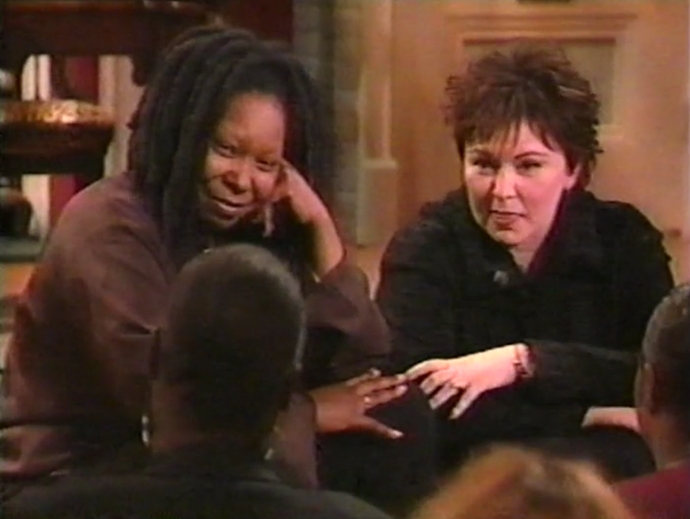 Whoopi Goldberg and Roseanne Barr in 1998 when they saw eye to eye. (Photo -- Courtesy: IMDB.com)

Whoopi Goldbergâ€™s comments about the Holocaust â€œnot being about raceâ€ on the insidious Leftist program called â€œThe Viewâ€    and her subsequent remarks on the â€œColbert Showâ€ exemplify how critical-race theory (CRT) based education and wokeism has infiltrated academia, the media, Hollywood and the Democratic Party.

In addition, the controversy shows the double-standard in how anti-Semitism is treated and how the sanctions and societal â€œcancellationâ€ are meted out differently for African American celebrities and politicians who say dumb stuff versus whites (like Roseanne Barr).

In other words, if you’re white, as were pretty much all the Jews annihilated in the Holocaust, then you’re not a “race” and you donâ€™t get as much “protection” as those with darker skin.

Her subsequent comments on The Colbert Show confirm this. She said:  â€œBeing black, when you talk about race itâ€™s a very different thing to me.  As a black person, I see what I see.â€  She then doubled down and said, how could the Holocaust be about race â€œif you are fighting each otherâ€¦white on white.â€  (As if we Jews were really â€˜fightingâ€™ the Nazis.  Rather, they were annihilating civilians with brute force).

In other words, in the Marxist-Leninist CRT world, the â€œstruggleâ€ is only between the downtrodden â€œbrown peopleâ€ against the â€œwhite oppressors.â€ Â In fact, Steven Colbert said that â€œwhitenessâ€ was a concept â€œcreated by the colonial powers to oppress other peoples.â€ Â  Itâ€™s a typical ingratiating remark white liberals make to demonstrate their â€œanti-racismâ€ and reflects how CRT and woke culture has seeped so deeply into the consciousness of liberals.

About half of Israeli Jews are not white (i.e. Ashkenazi Jews, like me) but are Sephardic or Mizrahi — many are black, Asian and Latino.    Probably 1/3 of world jews are not of European (white) origin.

In saying the Holocaust was â€œnot about race,â€ Whoopi (real name Caryn Johnson) also forgot the Nazis murdered some 4 million non-Jews â€“ mainly Poles and Romani/Sinti people (known as gypsies).  Had Europe had a large black population at the time, Hitler would have murdered them as Nazis also viewed blacks as sub humans — â€œthe Untermensch.â€

Furthermore, anti-Semitism is treated differently by the liberal establishment.  Only when white supremacists attack us, or conservatives say stupid things about Jews (which Democrats and their media allies tried to use against GOP candidates in the 2021 Virginia campaign),  does the Woke Mob come to our side.  But when liberals like Whoopi Goldberg or Linda Sarsour or the Squad spout insensitive stuff about Jews, there is no sanctioning.

Letâ€™s go back to 2018 when Roseanne Barr lost her show for saying former Obama chief adviser Valerie Jarrett looked like a character from the Planet of the Apes.  Jarrett is part black.   Whoopi, in fact, slammed Barr for the comment   Sharon Osbourne, who also is white, was ejected from CBSâ€™ â€œThe Talkâ€ for saying a black guest was â€œtoo ghettoâ€ during a heated discussion on race last March

Meanwhile, black comedian Dave Chappelle, despite pressure on HBO from the LGBTQ mob to can him for his comments about gays and transgenders, has not been canceled (heâ€™s quite lucrative for HBO) and Whoopi Goldberg was just removed from â€œThe Viewâ€ for two weeks.  MSDNCâ€™s Joy Reid and Al Sharpton keep their shows despite outrageous comments. Reid made disparaging remarks about gays for years; Sharpton whooped up the War on Cops. Neither has been canceled.  Apologies, accepted, move on.

My theory is the networks and big corporations are more apt to enforce woke cancel policies against whites who misspeak because they fear the backlash and charges of racism if they cancel a black person for saying something racist, anti-Semitic or anti-LGBTQ.   And groups like the NAACP, who often jump to their defense, get the ear of the media.

Corporate America has pretty much kowtowed to black activists on an array of complaints â€“ notably, NFL owners who refused to stop players from kneeling during the National Anthem.  Some 68% of players are black, or getting rid of Kate Smithâ€™s statue in Philadelphia because she sang racist songs early in her career  .

This very warped view that African Americans can speak what they want and whites cannot has seeped out of academia into the corporate world, media, Hollywood and the Democratic Party.  This Multicultural Mob or Woke Inquisition decides who gets canceled and who gets off with an apology â€“ or two week suspension.

In my view, none of these miscreants deserve to be canceled â€“ just get educated, apologize,   and move on.  None of them are experts in the subject and are able to spout their stupid remarks because they — have an audience on TV or social media.

still bying into indoctrination and CRT……..are you deliberately being stupid?

Why dont you watch the YouTube video and hear Colbert’s comments to burnish his “anti racist” credentials to Whoopi and if you don]’t find those symbolic of CRT-based indoctrination, then you’re being stupid

One of your best articles Ken. Good points made all around. Liberal Privilege definitely exists, and Black Political Privilege is part and parcel of liberal privilege.

Thank you, Mark. You know a lot about this area and it makes me feel good that you have such positive comments. Shavua tov!