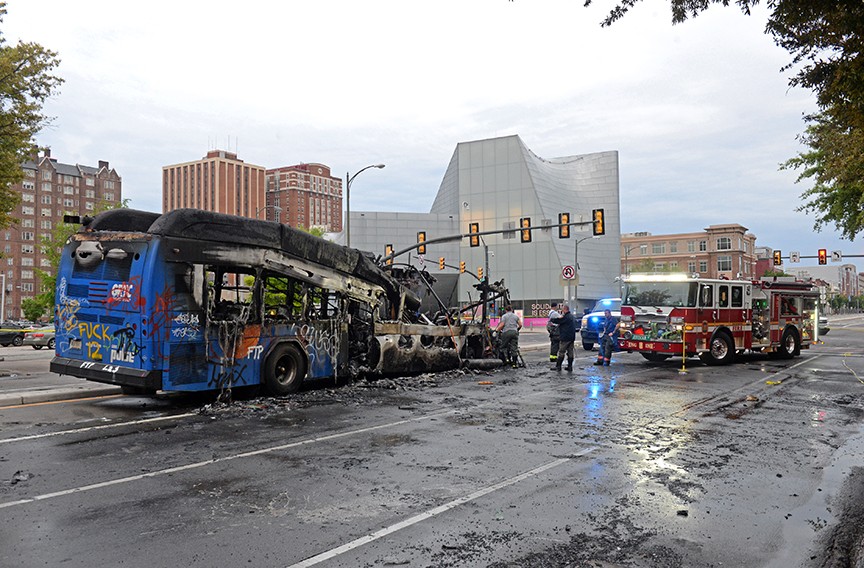 Unless it affects THEIR backyards, it seems elitist liberal urban dwellers don’t care

The conservative line in this year’s election is – -vote Republican because we support law and order and our “men and women in blue” (and brown, in some cases).

However, the liberal mayors whom conservative media love to beat up on – New York’s de Blasio, Chicago’s Lightfoot, and the bozos in Portland, Seattle and Minneapolis – keep placating the rioters and choose to blame “systemic racism,” “white privilege” and Trump for all these ills.

Richmond is a great local example.

Since George Floyd died at the hands of Minneapolis police in May, ushering in rioting and de-funding police efforts, Richmond has avoided the national news – but not a week goes by when we hear of another statue defaced, or a truck or bus being firebombed.  Looting keeps occurring in a city still struggling with its urban core.   Gov. Blackface has yet to call in the National Guard to keep order, and Democrat governors in other riot-torn states have also declined.

This Facebook video by Virginia Beach conservative attorney Tim Anderson gives a good account of the havoc we see in Richmond and Mayor Levar Stoney, who sides with the rioters over the police.

But according to this July poll by the Richmond Free Press, Stoney has a commanding lead for reelection this fall over four other contenders.

Of those polled, 79 percent labeled themselves as Democrats, 13 percent were Republicans and 8 percent were independents.  A large majority favored removing the Confederate monuments. The poll seems to accurately reflect Richmond.

And, there lies the rub.

During and after the 1960s riots, urban whites in the Democratic Party’s New Deal/Great Society held black rioters in disdain, but white mayors and governors were not reluctant to quell the unrest.  However, these largely blue-collar voters moved out of the cities in drove to the suburbs and exurbs and became Republicans over time.  I wrote about this phenomenon here in 2017 REVOLUTION SUMMER 1967

Because of that exodus, America’s cities lost population until a renaissance began in the 1990s.  Today, places like Richmond or Norfolk, where I now live, are increasingly attracting upper income hipster white liberals.  The redevelopment of Richmond’s fashionable Fan district and Norfolk’s Ghent, where I live, exemplifies this gentrification.

These toney neighborhoods are not being ravaged by the rioters, except monument removal.  That was probably by design.  Don’t bring the “Revolution” to the rich folks whom you need as allies.

Instead, the lootings and burnings have focused on random businesses – many of which are black owned or employ African Americans.  The radical leaders are black and so the African American community doesn’t speak out against the extremes.

Politicians always react to those who apply the most pressure, like NIMBYs, which I learned about in my 20 years involved in municipal issues.  And, if local elections have low turnout, any small pressure group can get its way with their local council or at the ballot box.  Turnout in 10 of the top 30 cities averaged 15% in local elections, I learned in writing my book on running and serving in office.

Local radicals, who are getting financial backing from Soros or some wealthy liberal group, are becoming more exacting in their methods to apply pressure on politicians.

This article in “The New Yorker” describes the tactics Minneapolis Leftists deployed to get their city council to unanimously support defunding the police in June –  including planting small tombstones with the names of police shooting victims on a councilmember’s lawn.  The defunding measure died because it required a charter change that had to go to the voters, and a higher authority vetoed putting it on this November’s ballot.  Hence, the defunding measures are really intended to throw a bone at the angry dogs of the Left, knowing full well it was not the council’s decision to make.

You’d think these urban liberals would be outraged their toney shops were looted and police are being tampered with.  But again, the Revolution has not come to their pricey neighborhoods.  And, because a number of these folks work in IT or jobs that can be done at home due to COVID, they can move and take their job with them, or hire their own security.

Like much of America today, these folks live in “online cloisters.”   The amount of time we spend on our laptops, tablets and smartphones takes our eye off being involved with people in the community.

Is it any wonder this “professional class” are among the biggest supporters of extreme stay-at-home COVID measures and keeping schools closed?  Easy to do if you have a secure job.  And, if your neighborhood is safe why fight city hall when you can bellyache on Facebook or Twitter about national issues?

Liberal city politicians understand this dynamic and feel it’s is necessary for their political survival to placate the extremists or one of them may primary you.  And, because most cops do not live in the cities where they work, so they have no vote on your election – at least in Virginia.  Low turnout benefits the protest groups, which are populated by underemployed youth activists seeking to make their fame in selfies on social media or YouTube.

So, Stoney and his ilk may win re-election, but it’s my sincerest hope the nation’s voters this fall will elect law-and-order pro-cops leaders like President Trump send a message to the Democrats for placating this anti-police, anti-business radical street thuggery.