Why We Associate With a Political Party 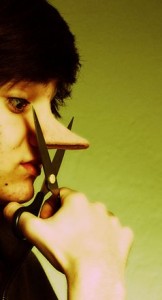 That’s it, Face…I’m cutting off my nose!

All of us have been upset at the outcome of a nomination contest, likely within the last few years. For some among us, that disappointment has been a near constant theme. Whether you’re tea party or traditional GOP, a libertarian or a culture warrior, or even if none of the dozen or so labels fits you, you’ve probably thrown your hands up more than once recently and wondered, “What’s happened to my party?!?”

Most of the time we swallow that disappointment and realize that we and our all of our countrymen would be better off electing the Republican nominee rather than the Democrat, even if we rooted for the other guy in the primary. However, it seems like that kind of post-primary reconciliation is increasingly difficult to come by.

Whether it was some social conservatives and liberty types who were disgusted with “Massachusetts Mitt” in 2012, or GOP traditionalists and Bill Bolling fans who sat out the 2013 election rather than cast a ballot for Ken Cuccinelli or E.W. Jackson, we’re seeing increasing difficulty in bringing the entire Republican coalition to the polls in November. More recently, a contentious nomination contest has left some conservatives apparently unwilling to vote for Barbara Comstock in the 10th district.

Folks, this is madness, and it has to stop.

My purpose here is not to defend any particular nominee, or any particular policy positions our nominees have or may have had. Instead, my goal is to defend the effectiveness of our party as an organization.

We all get into politics to advance our beliefs. We choose to politically associate with those who have similar views in the well-founded belief that there is strength in numbers. All very elementary, I know, but the key bit is this: unless the people who think precisely as we do constitute a majority of those voting, we have to form coalitions with groups that think only mostly like we do. Voters in fractious parliamentary systems get this intuitively–just ask any Israeli–but many Americans, enculturated within the two-party system, too often fall into the trap of thinking that every vote is an us-or-them struggle, forgetting that we ABSOLUTELY MUST be agreeable to those within our coalition with whom we may disagree on some issues.

People on different ends of the spectrum within the GOP routinely feel like they’re getting the shaft (“Why am I always told to hold my nose and vote for Bush/McCain/Romney?” or, “Those tea party people are wrecking the party!”). And yes, if you’re constitutionalist, small government conservative, you haven’t had much luck lately.

But the solution to your problem is (a) to elect our nominees, and (b) work harder to get good candidates, and to get them nominated next time. The solution is most certainly not the scorched earth tactics we witnessed last year, when certain elements of the coalition refused anything but token support for our ticket.

So I implore supporters of candidates who lost on Saturday to set aside the primary season bitterness, and realize the larger fight is with the *real* “other side.” Don’t sit it out, and don’t believe the false narrative that there is no difference between our nominee and the Democrat she’s running against. Most of all, don’t fall for the angry temptation of quitting the party just because only 80-90% of your views are being advanced by our candidate. That’s absurd.

Democrats are the only people who win when we burn our own house down in the vain and spiteful attempt to teach fellow Republicans a lesson.

Why We Associate With a Political Party was last modified: April 29th, 2014 by Chad Ochocinco
#VA10GOP
46 comments