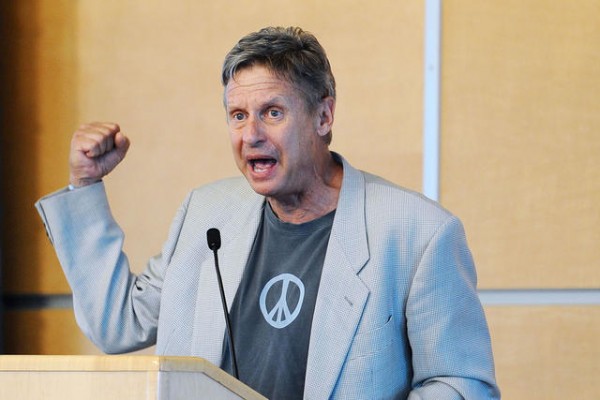 Why Did the Libertarian Party Nominate Gary Johnson?

Donald Trump’s campaign has alienated enough Republican voters that, for the first time in a long time, the Libertarian Party could get 5% of the popular vote. 5% is important because a Libertarian candidate in 2020 would get over $10 Million in federal subsidies. To date, Gary Johnson has raised $8 million dollars (opensecrets) and has been using this money to run numerous popular political ads. Imagine if he had started off with $10 million before he raised a dollar? The question is, however, if Libertarians recognized that 2016 was the year to make the all-important 5%, then why did they nominate Gary Johnson? In 2012, Gary Johnson got less than 1% of the popular vote.

In 2012, Governor Johnson raised $2.3 million and got .99% of the popular vote (opensecrets). An argument could be made that Trump and Clinton have dramatically increased the Governor’s chances of reaching 5%. If $2 million equals 1% of the vote, then $8 million could equal 4% of the vote. In 2012, there was some controversy over Governor Johnson’s claim to John Stewart that he was polling at 8% (politifact), but it turned out he was probably polling closer to 6%, with core support between 1 and 3%. So what happened?

When polls are conducted, people angry with the choice between Governor Romney and President Obama often told pollsters they were voting for Governor Johnson. However, while they did, in fact, refuse to vote for Romney or Obama, they also stayed home, not voting at all. I have every reason to suspect that we will see the same thing in 2016. The assumption that money buys votes has been proven utterly false (Thank you Jeb!). While I agree that Gary Johnson’s ability to raise money indicates that he will gain a greater share of the popular vote, I do not believe he will reach the 5% the Libertarian Party is hoping he’ll achieve.

Once again, Johnson is polling (in 2016) at about the same level he was polling in 2012. Johnson is currently polling at 7.2% (rcp). It is hard to believe that, this time, all these people saying they are going to vote for Johnson are actually going to show up at the polls. Truly, what’s their incentive to do so? While many Americans consider themselves to be “libertarian”, philosophically, very few are actually interested in voting for the Libertarian Party.

Why? The Libertarian Party is not active in American Culture, have not been relevant in American Media (minus Fox Business Channel) and have not contributed popular social, foreign or political policies (other than ending prohibition). Their position on open borders is extremely unpopular with both Republicans and Democrats. Their position on Prostitution is unpopular with Republicans (Moral Majority) and Democrats (Subjugation of Women). Their Conventions are usually focused on four priorities: nudity, open borders, prostitution and pot. This is not a winning formula capable of galvanizing the electorate.

The Libertarian Party is also overwhelmingly pro-abortion, which hardly fits with their supposed love of life and liberty.

While 538 predicts that Governor Johnson will receive 8% of the vote, they bizarrely give Johnson a .3% chance of winning the electoral college. Clearly something is wrong with their formula.

I understand why Libertarians are so passionate about getting Johnson over the 5% mark. If they do and if they can find an actual Libertarian to nominate in 2020, they could have a huge impact on the next Presidential Election. I also understand the Libertarian argument that voting for Trump or Hillary, regardless what party you belong to, is insane, considering that Democrats cannot stand Secretary Clinton and Republicans cannot stand Billionaire Donald Trump. However, while there is plenty of incentive to vote against candidates you hate, there is little incentive to vote for candidates that can’t win. Very few Americans are aware of, or even care about, the all important 5% mark. Many libertarian-leaning Republicans who believed Johnson in 2012 when Johnson promised that he’d reach 5%, will be less likely to consider it a possibility after Johnson failed so catastrophically in 2012.

I predict that Gary Johnson will get 3.2% of the popular vote, zero electoral college votes and once against disappoint loyal Libertarian Party members. I also suggest that if the LP is serious about getting 5%, it would be better not to depend on terrible Republican and Democrat nominees to drive voters to the polls for your candidate. We’ve had terrible Republican and Democrat nominees for the last three electoral cycles and you haven’t ever gotten close to 5%. Instead, try nominating a libertarian to run as a libertarian and focus on the most important issues facing the American electorate, setting your more unpopular plank to the side for a while.