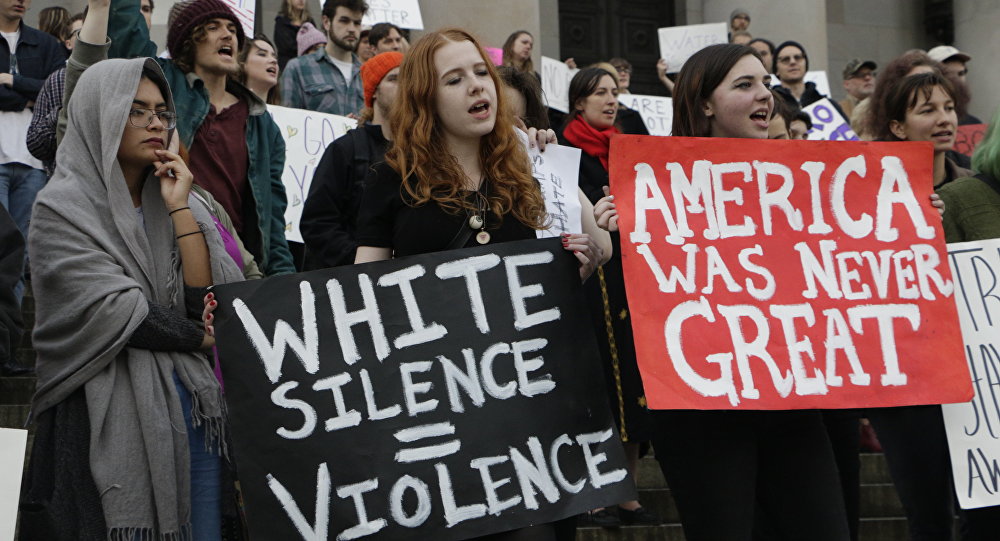 Why do progressives believe attacking American citizens is a winning strategy?

Democrats did not just lose in 2016 because the party was out of touch with the American people, the party’s leader also insulted and shamed the American people. Hillary Clinton antagonized and dismissed Trump voters, causing her own demise. Yet Democrats do not realize this, and therefore continue belittling and demonizing Republican voters. When will Democrats notice that the American people are listening and want a candidate who knows them, not insults them?

Michael Lerner, a principal investigator for the National Institute of Mental Health, explained to the New York Times:

Instead of challenging [the] ideology of shame, the left has buttressed it by blaming white people as a whole for slavery, genocide of the Native Americans and a host of other sins, as though whiteness itself was something about which people ought to be ashamed. The rage many white working-class people feel in response is rooted in the sense that once again, as has happened to them throughout their lives, they are being misunderstood.”

From the moment Clinton called Trump voters “deplorables” she ostracized an entire voting base and energized them to go to the polls and vote for the candidate who actually respected them. Clinton has even since admitted, in her book What Happened, that calling Trump supporters “deplorables” was more of a political gift than a curse.

Trump was speaking to a constituency of economically stagnant and frustrated Americans who felt unrepresented during the Obama presidency. Clinton chose to demonize this group, essentially rejecting their right to the American dream and costing her the election.

But this behavior has nevertheless persisted.

Following the election former First Lady Michelle Obama lashed out against female Trump supporters. According to the BBC in September 2017, Obama claimed, “As far as I’m concerned, any woman who voted against Hillary Clinton voted against their own voice.”

Yet one year into Trump’s presidency women across the country still defend their decision.

My 401(k) and my 403 have soared, and if anybody doesn’t realize that, they’ve been asleep for a year. I look overall not at what he says but what he does. All that other stuff is just rhetoric, smoke and mirrors.”

Similarly, Carol Markowicz told Reuters she voted for former President Barack Obama in 2012 but switched to Trump in hopes that his business background and immigration stance would help bring jobs back to Pennsylvania.

It is these hardworking women, and millions like them, that Michelle Obama and Hillary Clinton attacked as anti-feminist for voting for a candidate that suited their needs.

As a result of the war that ensued between the players, teams, and the President, the NFL saw its worst-rated season in years. The American people spoke up once again and launched nationwide boycotts of the sport, causing the NFL 2017 season to lose 10 percent in television viewership, a loss which caused a $30 million drop in ad revenue, according to Breitbart News.

Just like with Clinton, the NFL hurled insults at Trump and received the backlash of Americans who respect their country and respect the national anthem.

However, the Democrats have not learned from these patterns.

Following the passage of a Republican tax plan which cuts taxes for a majority of Americans, House Minority Leader Nancy Pelosi (D-Calif.) and Democratic candidate for Congress in Pennsylvania’s 18th District Conor Lamb asserted that the law’s benefits were “crumbs” to most taxpayers, prompting a pro-Paul Ryan super PAC to release an ad highlighting how out of touch Democratic leaders are.

Being a widow is tough. Raising two teenage sons by myself is even harder. That’s why I really appreciated the middle-class tax cut. Conor Lamb and Nancy Pelosi called it crumbs. Here’s the truth, Mr. Lamb, when you’re a single mom and everything falls on your shoulders, every dollar counts.”

The left’s attack on average, hardworking American people who are making informed decisions about how represents them has only encouraged voters to head to the polls against these attacks. It is no surprise the most recent Rasmussen Reports poll puts the President’s approval rating at 48 percent, despite constant character assassination attempts. When will the Left learn they cannot bully the American people into voting for them? For Republicans seeking reelection it may be best they don’t learn, but for the unity of the American people, they must.

The Left used to spit on the troops as a show of their anti-Americanism. But they realized that this was bad optics, so the Democrats made sure they cut that out. Now the Left doesn’t really get all that excited over wars because if truth be told it is a lot of white males in the military from fly over places that they could give a rat’s butt about. So waving the flag is fine with them.

Basic question. How much security can a school system afford? Should there be one security person per teacher and administrator? Obviously, one security guard for the entire Parkland school was utterly inadequate. So how much is enough.

One in each hall ?
1st Grade Director (undercover gaurd) 2nd grade and so forth….?
Definitely looking at layout of campus and building design in new schools.
A bigger question is all of our Legislators having these discussions?
W,
I like that Republicans talk of realistic security measures , a more comprehensive approach than just a single issue of gun control.
Now why won’t they apply this recipe for illegal immigration?

Ohio sheriff offered gun training classes for teachers and school personnel. He expected maybe 20 signups. Within a day, he received between 300 and 400 requests. He was overwhelmed and cut sign-up off. I guess teachers are tired of having their survival treated as a political game by the left. Sounds like Trump is winning the argument.

Progressives have a value.
The value is they will tax and prosecute the illegal employer, Republicans won’t.
Use the progressive to oust the RINO.
Make the TEA Party be more than just a mouthpiece for Republicans.

One of the four deputies who hid while the Parkland massacre was going on was a member of the Muslim brotherhood. Cruz was enamored with Syrian and other Islamic resistance causes. Don’t know if there was any connection between the two but it does raise a question about motivation and support for that motivation. Questions are now being raised about terrorism not just drug induced insanity.

This is the sort of vapid commentary that serves humorous fodder to those who will again vote against the far-right RPV ticket. Tell us more about what makes her qualified to write here. Other than her record of attacking our schools:

Since we are talking about the hatred progressives have for America, latest report on the Florida mass murder was that four, I repeat four, Broward police officers waited behind their car or immediately outside the school while the mayhem was occurring. Hey you leftist trolls, what about this situation. Still screaming for a gun free zone? Still screaming about guns being kept out of the hands of responsible teachers? At this point, you have become ghouls profiting off the deaths of children. There is a special place in hell for all of you.

So you think an untrained teacher would do better than four armed trained police officers? Absurd. Take away the guns.

Your logic is absurd. Of course an untrained person who is under attack by a homicidal maniac is going to do better than four deputies who won’t go inside the building. Americans have always been willing to defend themselves. Don’t take away their guns.

I would hope so, but the left has spent decades teaching passivity in the face of violence. Better to go to your death kneeling and singing kumbayah than standing and trying to throw something at the murderer. I remember what happened to Bernard Goetz who was pilloried for defending himself against 4 or 5 violent muggers on a subway.

As I would expect, you create a meaningless straw man so you can shoot it down. Armed police officers standing outside the school are worth nothing. One trained concealed carry teacher inside is infinitely more valuable – and a dozen would be great.

How could an untrained teacher have done worse? While the Broward County police were cowering behind their cars one untrained (and unarmed) teacher and football coach used his body as a shield to protect the students he taught. Who had the better chance of stopping the killing – the teacher who sacrificed his life for the kids or the police who refused to enter the building? Rest in peace, Aaron Feis – they should rename the school after you.

The more the trolls post, the more they reveal their evil intentions.

If only one person had a pistol on the subway car when Colin Furgeson shot and killed all of those people going to work, I think 9.
Hard to remember at my age.

Somehow though Virginia seems to be bucking the national trend of abandoning the Democrats over their identity politics charades (I consider the Alabama special senate election more about the flaws (or perceived flaws) of Roy Moore more so than any anti-Trump backlash).

It seems that way to me too in Alabama. But Virginia is different. Large swaths of Virginia have become the land of milk and honey for social justice warriors. Republicans in this state are no more going to win by fighting the social justice warriors on social justice issues than Felonia Von Pantsuit won by calling millions of Americans deplorables. The hallucinations of the SJWs are already being laid bare by the realities of American society. My favorite is the “white privilege” idiocy. I guess the millions of white people living in desperate poverty in rural American didn’t get the e-mail telling them that they would be guaranteed to prosper because of their white skin. I also guess the Asian-Americans who now have the highest incomes and highest educational attainment of any racial group also didn’t get the memo telling them they were doomed to fail by not being white.

The Republicans in Virginia need to spend 90% of their efforts on economic issues. For example, if the leaders of our public colleges and universities can’t keep tuition in line with median wage increases then they will all be fired and we’ll start again with a new group of managers.

Yes, progressives do think attacking Americans is a winning strategy. You can see the impact of the strategy working in Western Europe, and it is winning. Open borders, multiculturalism, and a massive welfare state is the foundation of the progressive, aka global socialist, ideology. The oppression of American citizens is part of the price to achieve the glorious and beneficent tyranny of the State.

By the way, President Trump’s rating is now 50% and it is my understanding that a CNN pollster committed suicide by swallowing his tongue because of this.

Homeless guy shouting on the corner.

That would be one of yours.

Wait,i thought you were trying to name wholly unreliable sources of information and I was trying to keep up.

Leave Bernie Sanders out of this.

Midterms are coming. Save the bile for election night. You’ll need it.