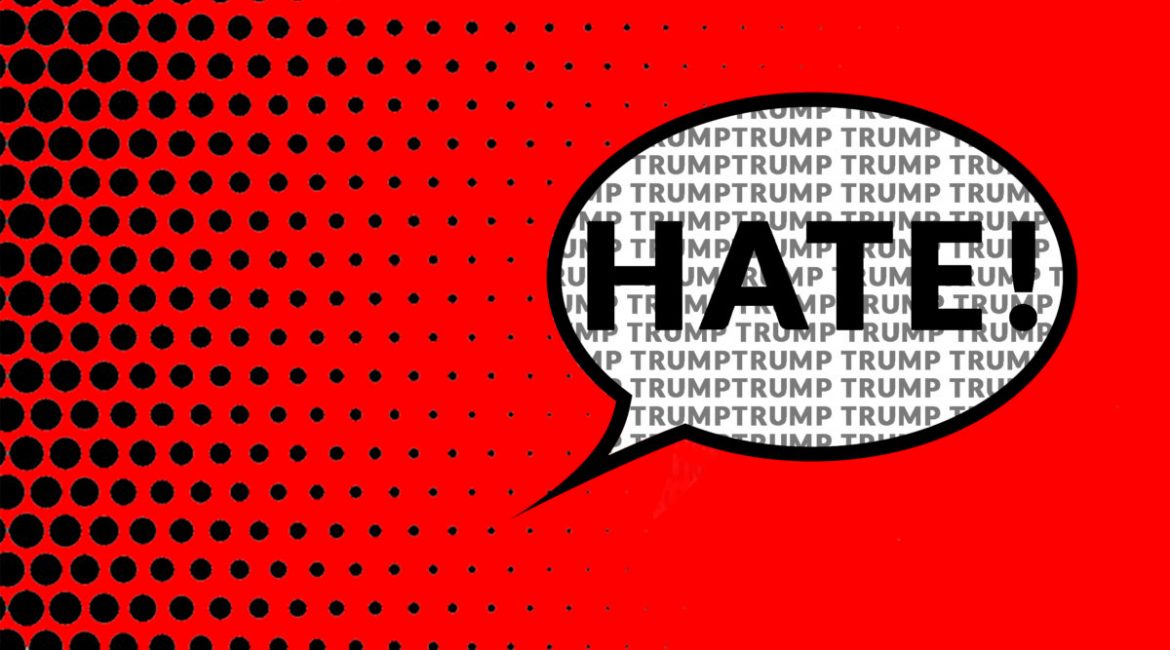 Why do some people hate Donald Trump?

Many past presidents have been strongly disliked by large portions of Americans.  The source of the dislike was mostly the president’s policies. For instance, George Bush was strongly disliked by many Americans mostly for his Iraq war policy.  The current dislike for President Trump, however, goes much deeper.

Some people actually hate the president.  Some people are so hateful that they react violently toward Trump supporters. But why do people hate him?

There are a number of reasons, but the most significant is simply that he beat Hillary Clinton.  Many people have not gotten over that and have hated Trump from election night forward. Some who hate him seemed to have influenced investigates into Trump.  Others have simply yelled, “Impeach forty-five.”

The hate for Trump seems to be fed by some of his personality flaws. He also is very straight forward, quick to respond and he has many of the “in your face” traits found in people from Queens New York where he was raised.  And sometimes he does say things unfiltered. His opponents, as well as the vast majority of the mainstream media, always seem willing to add to the hate when his communication is not clear.

Many hate Trump because they say he is a racist.  That mostly stems from Trump not clearly expressing himself and not in a politically correct manner.  Examples are his travel ban and his position on border security.

Opponents of the travel ban called him a racist because he only banned travel from seven countries that were predominately Muslim.  He also spoke about it in a manner that made it easy for his opponents to label the action a “Muslim” ban, which is a racist position.

Of course, the ban was for travel from any country that could not adequately vet the travelers to ensure security.  Whether they were mostly Muslim, or mostly any other characteristic, was not the primary consideration. His ban didn’t refer to race, but rather to countries who could not vet travelers.  They just happened to be predominately Muslim countries.

On immigration, what he meant to say was that included in vast majority of good people entering our southern border illegally for economic and safety reasons, is a couple percent of really bad people.  These bad people must be stopped from entering the US. Security at our border will keep out those bad people who are rapists, drug smugglers and human traffickers

Other haters say that Trump is prejudice against women, African-Americans and Hispanics, and he does nothing to help them. Aside from his perceived character flaws, Trump supporters have trouble understanding why haters believe he is prejudiced.  After all, the President has given each of those groups the one thing they really need and really want: opportunity.

Women, blacks and Hispanics have taken advantage of the new opportunity that Trump’s growing economy has provided, by finding good jobs.  Unemployment rates for all three groups are at historic lows. And millions of Americans no longer need food stamps.

Some haters say that Trump convinced Congress to give huge tax breaks to wealthy individuals and corporations while forgetting about the middle class.

Trump’s primary goal for income tax policy was to stimulate economic growth.  To do that, in a capital intensive economy, new capital must be created. His tax cuts gave middle class households a cut too, except for households who live in high tax, high real estate value states where American taxpayers had been providing a subsidy to them by allowing unlimited tax deductions for real estate taxes and mortgage interest.

The Trump tax cut is providing new capital.  That increases growth today and will likely accelerate growth in the future. And they hate him for that?

Others say they hate him because he is against unions.  That’s because Trump selected two conservative judges for the Supreme Court.  In the Janus decision, the court ruled that workers who freely choose not to be represented by a union have a right to bargain as an individual.  Therefore the union cannot force these individual pay union dues.

Some hate Trump because they believe he is dishonest,  They believe he colluded with the Russians to sway the 2016 election and/or he obstructed justice by firing FBI Director James Comey.  If the special prosecutor’s report shows that isn’t true, then the haters will look for different reasons to hate him. They will examine Trump’s financial transactions and the transactions of 81 people associated with Trump.

It remains to be seen if the haters will follow through with this.  If they do, they are likely to find one “I” not dotted or one “T” not crossed.  That will likely feed their hatred.

Those are the haters that are most worrisome.  Those who hate the man personality likely still believe in the core values that made this country great.  Those who hate him because of his values, really hate what made America great.

Trump has accomplished much in his first two years despite the hatred.  Imagine if people gave him a fair chance, how much more he could accomplish to move the country forward.

Michael Busler, Ph.D. is a public policy analyst and a Professor of Finance at Stockton University where he teaches undergraduate and graduate courses in Finance and Economics.